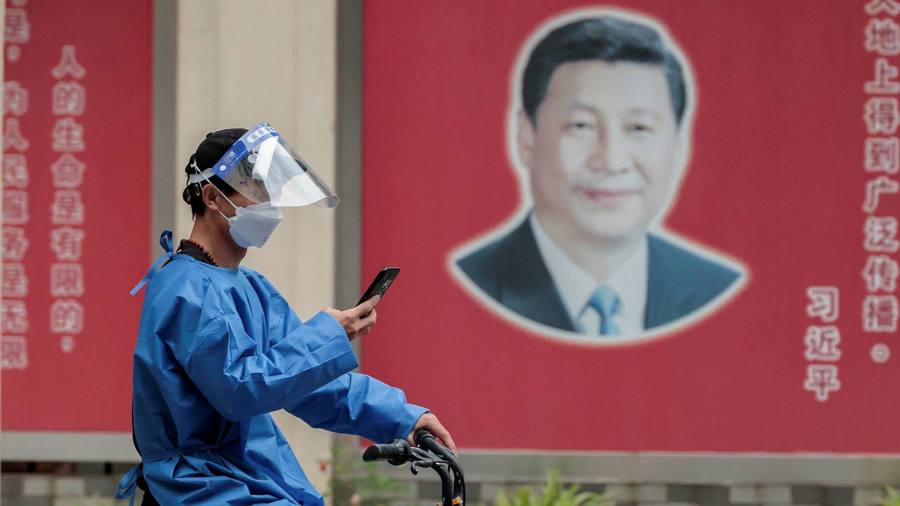 Four weeks after President Xi Jinping promised to win the “battle to defend Shanghai” against what he has called a “devil” virus, millions of people streamed out of their homes and returned to their workplaces on Wednesday.

The latest victory in China’s long war against Covid-19 could be temporary. Another outbreak in the country’s most populous city would, under Xi’s controversial “zero-Covid strategy”, probably trigger another long lockdown. Many Shanghai residents remain subject to restrictions if their residential compounds are still deemed to be “medium or high-risk” because of recent cases.

Lockdowns and other restrictions in Shanghai, Beijing and dozens of other regions over recent months have also been costly, crushing economic activity. But Xi’s aggregation of power over the past decade has been so complete that he is unlikely to pay a significant political price for the considerable costs of zero-Covid, analysts said, even as he attempts to secure an unprecedented third term in power at a Chinese Communist party congress this year.

“There is downside for Xi from zero-Covid but the question is, is it meaningful and what’s the practical impact?” said Christopher Johnson, head of China Strategies Group and a former top China analyst at the CIA. “The way he’s managed things makes it pretty difficult to stop what he’s trying to do.”

In addition to remaining head of the party, state and military through at least 2027, when he will turn 74, Xi wants to promote as many loyalists as he can and further solidify his ideological grip on the world’s oldest ruling Communist party.

At the last party congress in 2017, Xi stole a march on would-be rivals such as Premier Li Keqiang by enshrining his concept of a “new era” in China’s development that he intended to dominate just as Mao Zedong and Deng Xiaoping dominated its late 20th century revolutionary and reform periods.

A few months later, Xi abolished the previous two-term limit on the presidency, setting the stage to rule for life if his health allows. His status as an equal of Mao and Deng who has eclipsed his two predecessors, Hu Jintao and Jiang Zemin, was reiterated late last year in a rare party “resolution” on Chinese history.

Lance Gore, a China expert at the National University of Singapore’s East Asian Institute, said Xi has been “very vigilant” ever since assuming power in 2013, using a sweeping anti-corruption campaign to purge hundreds of senior party cadres, military officers and executives at state-owned enterprises. The clear-out earned Xi many enemies but it also provided him with a vast patronage opportunity to appoint people who are now beholden to him.

“The constant removals have put great pressure on anybody who dares to agitate against Xi Jinping,” said Gore. “I don’t see any organised opposition or any individual challengers who are powerful enough to face him. All the power is in his hands.”

Li, who many party and government officials have long characterised in private as “the weakest premier in the history of the People’s Republic”, has recently taken a more high-profile role in attempting to revive the economy after Shanghai was put in lockdown on March 28. But he has also emphasised the importance of Covid eradication, which Chinese officials said had saved the country from “massive numbers of infections, critical cases and deaths”.

“What Xi Jinping is doing reminds me of Mao,” adds Gore, who grew up in Maoist China. “Whenever Mao caused disasters, he let others clean up the mess. Then when everything settled down, he stepped out again.”

Joseph Torigian, an expert on Chinese and Soviet politics at American University in Washington DC, agreed that it was occasionally useful for Xi “to have Li Keqiang at the forefront managing really thorny issues”.

When the Covid epidemic erupted out of Wuhan in January 2020, Li was dispatched to the city as it was put into lockdown. When it emerged from its trauma two months later, it was Xi, not Li, who went to Wuhan to take a victory lap.

While Xi’s administration has no good answers for why it has failed to vaccinate tens of millions of elderly people against Covid-19, it still prides itself on the fact that China’s official death toll for the pandemic is 14,600, compared with more than 1mn for the US. If Chinese people had died from Covid at the same rate as Americans over the past two years, China’s death toll would stand at more than 4.2mn.

Torigian also cautioned that “a lot of things we outsiders may see as incompetent or unpopular policies”, such as zero-Covid or Xi’s stubborn support for Russia’s invasion of Ukraine, can be viewed very differently by China’s elites.

“Many people within China’s system believe that to side with the Russians makes sense, at least to the extent that they don’t sacrifice their economic interests, because of what they see as the nature of the long-term western threat,” he said.

“And with regards to zero Covid,” he added, “if people aren’t vaccinated enough and your health system isn’t capable of handling mass infections, even if you don’t like Xi Jinping, it may be hard to say there are other options”.

Experts explain how music NFTs will enhance the connection between creators and fans
How They Closed It: Selling The Rich History Of A Landmark Australia Estate
Symbotic is Poised for Upside, Says Analyst
The Best Way to Calculate Profitability for Startups
Silver, Gold, Aliens & Hidden Artifacts! What Else Are They Hiding From Humanity?