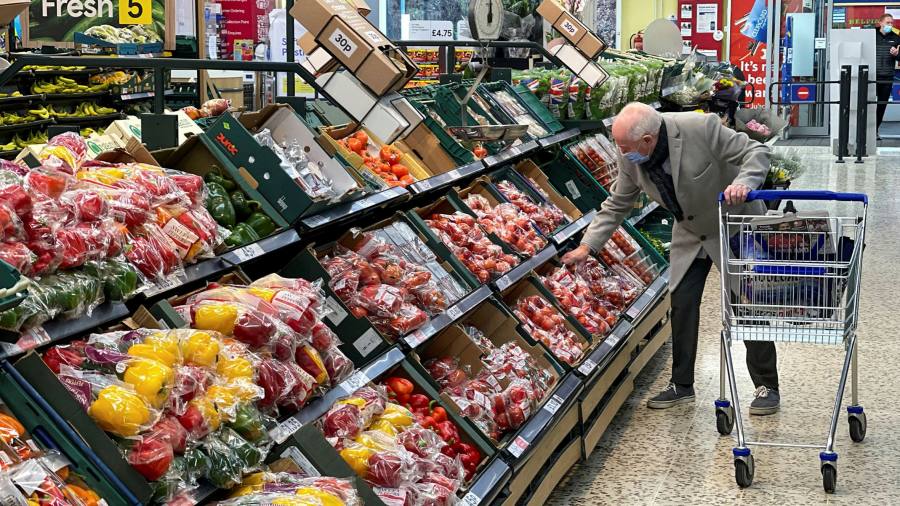 Leading UK retailers Tesco and Marks and Spencer reported strong Christmas trading on Thursday but limited profit upgrades amid uncertainty about the extent to which rising costs can be passed on to customers.

High street chain M&S said full-year profit would be “at least” £500m, a slightly more confident projection than its November forecast of “around” £500m. Investors reacted by marking its shares down 5 per cent.

Both companies sounded a cautious note over the impact of inflation. Retailers are facing rising costs for raw materials, freight, wages and energy just as household incomes are set to come under intense pressure from rising taxes and energy costs.

Tesco’s chief financial officer Imran Nawaz said the group generally assumed annual cost inflation of about 2-3 per cent but that was currently running closer to 5 per cent.

Chief executive Ken Murphy and his M&S counterpart Steve Rowe said they were committed to mitigating the impact of cost inflation on store prices by working with suppliers and reducing other costs.

Both also stressed the importance of quality, product innovation and value — defined by Rowe as “satisfaction minus price” — as opposed to just price.

But supermarkets are keen to avoid a repeat of the strategic blunders they made in the aftermath of the financial crisis, when a focus on protecting profits rather than lowering prices allowed Aldi and Lidl to seize market share.

Tesco and rival Sainsbury’s have since price matched key items to Aldi, preventing a large price gap opening up. The pledge “really establishes in the mind of the customer that for those essential basket items they will not be beaten on value if they shop at Tesco,” said Murphy.

M&S too has worked hard on pricing in recent years, focusing on lower everyday prices on lines rather than confusing promotions.

“It’s a tricky balance,” said Eoin Tonge, M&S’s finance chief, adding that cost reduction programmes and direct relationships with suppliers would help manage some of the impact. But it was “inevitable” that some would be passed through to consumers.

Murphy said Tesco’s prices rose roughly 1 per cent on average in the 19 weeks to January 8 but would not be drawn on how much further they might increase in the year ahead.

Andrew Porteous, retail analyst at HSBC, said that so far grocers were keeping prices rises to a minimum. “We tend to become more concerned when food inflation exceeds wage growth . . . but this does not feel like a significant risk at the moment.”

Cost pressures were also evident, though less urgent, in clothing. “Later on in the year we will see the headwinds of inflation in raw materials and shipment but we’ll work hard to drive volumes to limit how much of that is passed on,” said Rowe.

Next said recently that it expected prices on its 2022 autumn and winter lines to be about 6 per cent higher than the same items last year.

Despite the headwinds, both Tesco and M&S reported solid Christmas trading and increased their market shares in food.

Tesco’s UK sales in the six weeks to January 8 rose 0.2 per cent on last year while profits at Tesco Bank will be higher than forecast because of lower-than-expected levels of bad debt.

Clothing and home sales were up 3.2 per cent versus two years ago, their second quarter of growth, helped by a more focused product offering, keener pricing and higher online sales.