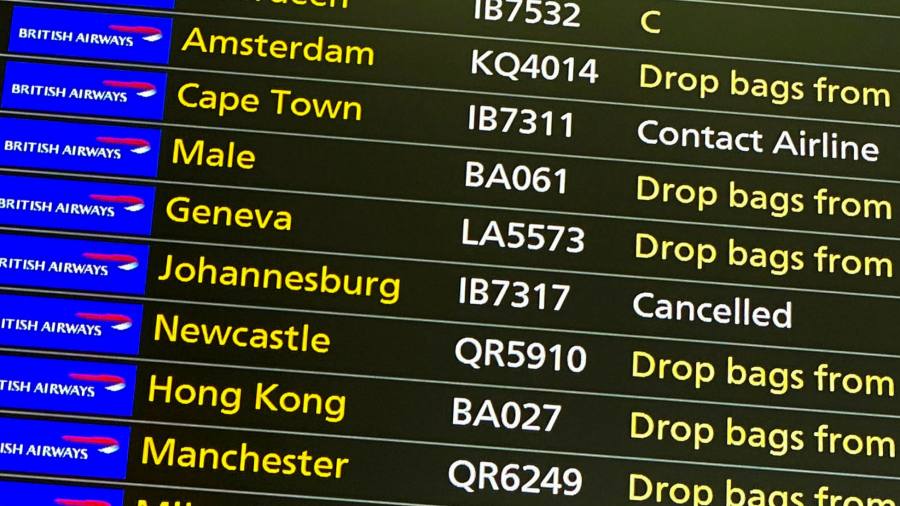 The World Health Organization has called for a balanced global response to the Omicron coronavirus variant, saying countries which report cases of the new strain should not be penalised, as the South African scientists behind its discovery prepare to ship samples to labs worldwide.

The discovery of a new, highly mutated coronavirus variant in Botswana earlier this month has alarmed global health officials, as it appears to be behind a surge in cases in South Africa. The so-called Omicron variant displays preliminary characteristics that suggest it is able to reinfect patients and evade vaccines. It is not yet known whether it worsens symptoms.

A number of countries have imposed severe travel restrictions on the southern African region. Switzerland has also restricted travel from Israel, Hong Kong and Belgium, where two cases of the variant have been confirmed.

Stock markets fell on Friday as investors grappled with the possibility that much of the progress made in recovering from the pandemic could be undone.

“We have countries that are reporting this information and we don’t want them to be further stigmatised,” Maria Van Kerkhove, the Covid-19 technical lead at WHO, told the Financial Times. “There needs to be a balance in the response.”

Asked whether travel bans were justified, Van Kerkhove said countries should increase surveillance for this variant and others, increase testing capacity and do “intelligent sequencing” that was “more geographically representative, covering more countries, and strategically testing, not just more, but strategic locations”.

“We need people to have a measured approach to risk,” she said. “Delta is [still] circulating around the world and killing people around the world. We can’t forget how many people are infected with Delta.”

Van Kerkhove said that if global access to vaccines had been more equal, “we would be in a very different epidemiologic[al] and economic situation around the world. You’d have the poor and vulnerable protected, fewer deaths”.

The WHO took the unusual step of saying the Omicron variant was “of concern” on Friday, skipping the intermediate “of interest” step. The move has limited practical implications, but it acts as a signal to the world that the issue is serious.

Scientists on the WHO’s technical advisory group on vaccine evolution had debated whether to designate it a “variant of interest” first, but decided to give it the highest designation after agreeing slow responses at previous key moments of the pandemic had been disastrous, according to people familiar with what was said.

Tulio de Oliveira, one of the scientists behind the Omicron discovery and the head of South Africa’s Centre for Epidemic Response & Innovation, said the country had been “penalised with vaccine hoarding, travel bans and discriminated since the discovery of the Beta [variant] and now the Omicron”.

“If this continues, we risk that many countries will stop reporting new variants and the world risks going back to the beginning stage of the pandemic,” he told the FT.

De Oliveira said he has had requests from the US National Institutes of Health, the Coalition for Epidemic Preparedness Innovations, the UK’s Health Security Agency and Porton Down labs to share virus stock.

“We will do the same as we did with Beta — that is to send virus stock to all of the main biosecurity agencies in the world.”

“We have always been very collaborative with all of the main security agencies in the world so the key questions can be answered as fast as possible,” he said. “We do not send samples to private companies but work via our government with other government biosecurity organisations.”

Van Kerkhove said Omicron appeared to display a so-called “growth advantage”, as the proxy measure to detect it — a missing gene in PCR assays — was increasingly present in surging cases.

She would not give a total estimate of cases detected.

She said it was not known where the variant originated, but that one of the hypotheses under consideration suggested it may have come from an infected immunocompromised patient who could not clear the virus fully and in whom the virus replicated for a significant amount of time.

Van Kerkhove stressed the WHO did not want people to panic, and that “there are already sharing agreements in place where the virus can be shared, so scientists can collaborate in real time” on studying the effect of vaccines and immune responses. Results were expected in two to three weeks at earliest, she said.

Van Kerkhove said this “could be” a December 2019/January 2020 moment, when the world first learned of the coronavirus outbreak in Wuhan, China.

“South Africa presented to [the WHO] this week. We acted fast,” she said. “No regrets.”