Silver caught aggressive bids on Tuesday and shot to one-month tops, around the $23.70 region during the early European session.

From a technical perspective, the XAG/USD showed some resilience below the 200-period SMA on the 4-hour chart and managed to defend the $23.00 mark for the second consecutive session on Monday. The subsequent positive move validated the recent bullish breakout through an inverted head and shoulders neckline. This, in turn, supports prospects for a further near-term appreciating move. 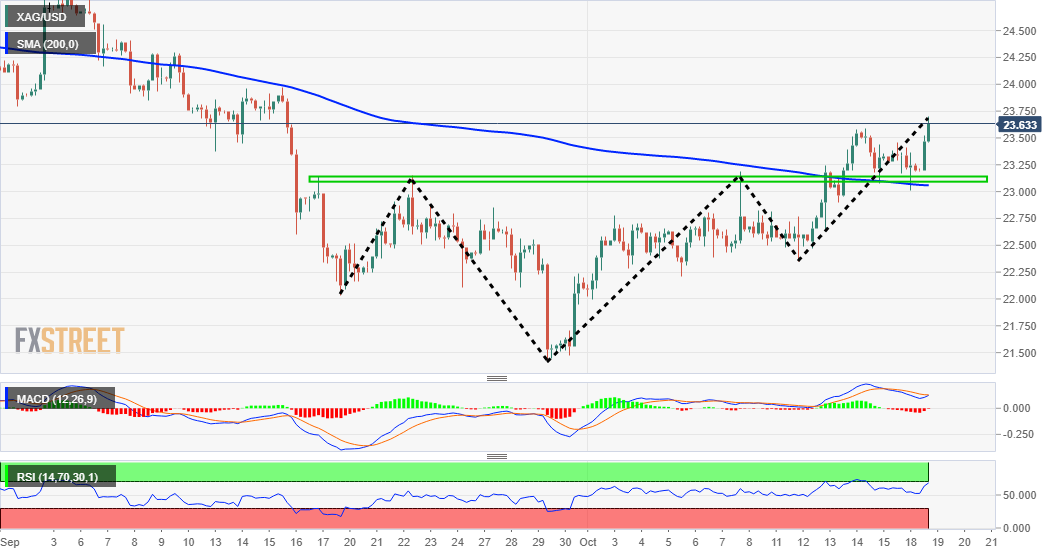 The constructive setup is reinforced by the fact that technical indicators on the daily chart have just started moving into the bullish territory and are still far from being in the overbought zone. Bulls might now be looking to build on the momentum further beyond a downward-sloping trend-line resistance, extending from July monthly swing highs, around the $26.75-80 region.

Nevertheless, the XAG/USD seems all set to extend its recent recovery move from YTD lows and aim to reclaim the $24.00 round-figure mark. This is followed by resistance near the $24.15-20 region, above which the momentum could further get extended towards the next relevant hurdle around the $24.75-80 region. The white metal could eventually climb to the key $25.00 psychological mark.

On the flip side, the $23.50 region now seems to protect the immediate downside. Any subsequent pullback might still be seen as a buying opportunity near the $23.00 mark, which should act as a strong near-term base for the XAG/USD and a key pivotal point for traders. A convincing break below might prompt some technical selling and accelerate the corrective fall towards the $22.75-70 region.