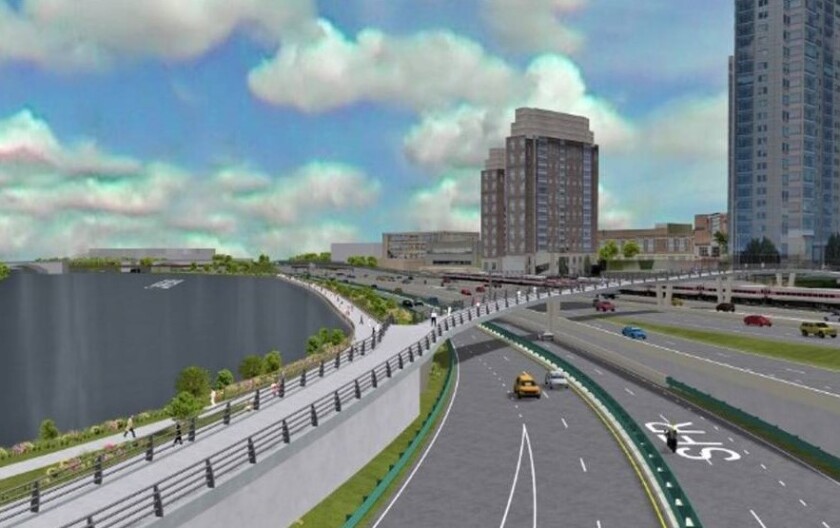 Massachusetts officials are confident they’re getting it right this time.

Gov. Charlie Baker’s administration has repivoted on its overhaul of a worn-down, swerving viaduct on the Massachusetts Turnpike in Boston’s Allston neighborhood, and is proposing to route that stretch of Interstate 90 called “the throat” at ground level along the Charles River.

The cost estimate — for now — is $1.7 billion for what’s formally called the Allston Multimodal Project, a decade in the making. The new construction timeline is eight to 10 years.

State Department of Transportation Secretary Jamey Tesler said the undertaking could open 100 acres of development along former railyard land, and clear the way for a long-awaited commuter train station.

Plans call for a straightaway highway alignment that would enhance safety, and a wider Paul Dudley White Path near the river for bicyclists and pedestrians.
It would connect “visually and directly” with the river, said Rick Dimino, president of the business group A Better City. The land is also adjacent to Boston University and across the water from Harvard.

“We’ve advocated the at-grade solution for a number of years and we were so pleased with the announcement by Gov. Baker and the DOT,” said Dimino, whose organization has been advising on the project.

“At-grade is not only good for city building and community growth, but it would also provide a healthy dose of economic expansion.”

“An all at-grade design will shorten construction time, lower costs, create fewer negative economic and congestion impacts, and improve neighborhood access to park land along the Charles River,” it said.

Other benefits, according to officials, include reduced longer-term maintenance and life-cycle costs; and a pedestrian-bicycle connection from Agganis Way at BU to the Charles River.

Over a decade, transportation officials have tried to reach a consensus among BU, Harvard, community leaders and activists over how to replace the crumbling viaduct, which swerves easterly beyond the Allston exit en route to downtown Boston three miles away.

How Massachusetts will fund the Turnpike project is still in question. “They still need to come up with the financing,” Dimino said.

Contributions from the city, Harvard and other parties could contribute. Other next steps include design, permitting and mitigation.

State Highway Administrator Jonathan Gulliver said officials would still have to conduct analysis on alternatives such as stacking the highway, but that administration’s support for the at-grade option means workers will not need to “simultaneously design three different options to answer one question.”

The state could also use toll revenue from the Mass Pike, which has been a MassDOT unit since a 2009 reorganization that dissolved the Massachusetts Turnpike Authority.

The updated design trims some of the infrastructure width. Earlier proposals had put adjacent Soldiers Field Road, which morphs into Storrow Drive, four feet into the riverbank. That triggered the ire of environmentalists.

Meanwhile, project delays forced the commonwealth to fast-track $75 million for repairs to the viaduct, which would remain in place while the new one is under construction.

“This will be a regional hub with direct connectivity to a growth zone in our region, which is Allston-Brighton,” Dimino said. “It also allows for a way to mitigate traffic for commuters in our western corridor.”

This could also open opportunities in Worcester, 30 miles away, and points west. Regions elsewhere in Massachusetts have argued that the state’s economic boom has been too Boston-centric.

A study that state Auditor Suzanne Bump’s office released earlier this month said lagging infrastructure in Western Massachusetts has led to “a tale of two commonwealths: one that is wealthy and growing, and one that is stagnating, or worse, caught in a downward spiral.”

Bump added: “With the possible infusion of federal investments and a greater state-level focus on infrastructure issues, now is an opportune time to take stock of where investments are most needed in Western Massachusetts.”

Cambridge-based Harvard, which owns property on the Boston side of the river, expects to develop land around West Station, the site of the old Beacon Park Yard trainyard, and build above it through an air-rights deal.

Adjacent to its business school and sports facilities, it could parallel the Massachusetts Institute of Technology’s massive undertaking around Kendall Square in Cambridge.

Neighborhood-university relations have been touchy for generations in Allston-Brighton, a land peninsula traditionally isolated geographically and politically from the city proper. Suburbs Brookline and Newton as well as the river abut Allston-Brighton, whose neighbors include not only BU and Harvard, but also Boston College at its western end.

Other unfinished business in Greater Boston transit infrastructure includes the four-mile Green Line extension northward into Somerville and Medford, with opening pegged for later this fall. The federal government mandated the extension as part of Big Dig mitigation.

In addition, transportation advocates are scrutinizing a planned expansion of Massachusetts General Hospital in Boston, which could pave the way for a connector between the MBTA’s Charles/MGH and Bowdoin stations on the Red and Blue lines, respectively.

The Boston Planning and Development Agency on Oct 14 approved the hospital’s a $2-billion replacement of several current buildings with a new two-wing structure that would leave open room underground.

Red and Blue are the only lines in Boston’s subway-and-streetcar system that do not interconnect.

“That would be an important transportation improvement,” ABC’s Dimino said. “We like the idea.”