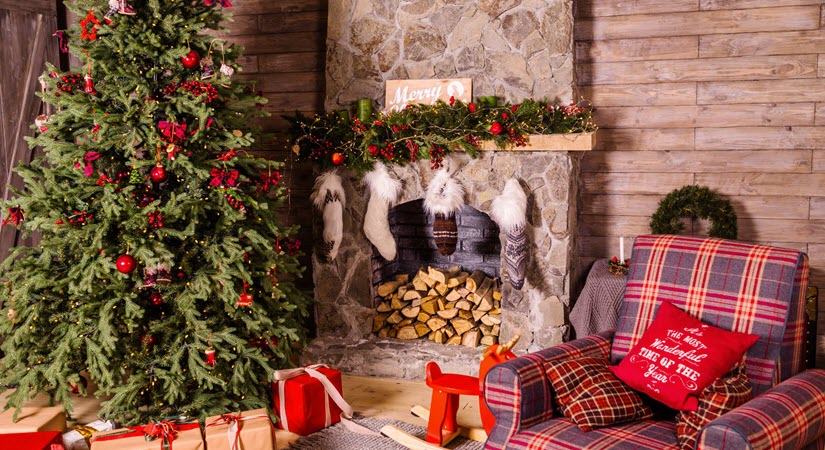 You might think after almost two years of endless mainstream media coverage blaming the coronavirus for everything, rounds of economic stimulus, and inflation that we might get to enjoy a somewhat peaceful Christmas in 2021.

But it appears that thanks to severe supply chain logistical snafus and other more complex issues, what you might expect to exist on store shelves simply won’t be there.

Want something delivered for Christmas? Good luck! Might not get there in time, if it arrives at all. The food you want to pick up for that good ole’ fashioned holiday dinner? Might not be on the shelf at the grocery stores when you go shopping.

(In fact, it’s possible you’re already seeing empty shelves where you get your food, and that trend isn’t likely to let up any time soon.)

That’s because these huge global and national supply chains for consumer goods are complex systems, and multiple problems can happen at once with no single “cause” to point a finger at. When those problems happen, it can result in catastrophic failure:

There are a lot of points in a complex supply chain process where a human being has to do their job right, a truck driver has to arrive on time, or a ship captain must deliver.

If a truck breaks down, a ship runs aground (like the Ever Given did), or if any other person in the supply chain doesn’t do their job … ripple effects travel down the chain. Sometimes entire parts of the system “break down,” and then a failure happens.

Keep that and the point about trying to pin down “single causes” in mind as you read what Wolf Richter had to say about the current predicament:

The holiday selling season is approaching, and a whole litany of weird shortages is ricocheting through the economy. Stuff suddenly gets hung up somewhere, on a ship, or in a port, and then ends up somewhere else, or it’s on backorder for months, as manufacturers are struggling with material shortages and in Asia with Covid outbreaks that shut down factories for weeks at a time.

And stimulus-fueled demand in the US has been huge and relentless, while retailers are struggling with inventories, some more than others.

Increased demand fueled by stimulus payments could also contribute to a problem like this. But that isn’t the entire story…

It doesn’t help that 500,000 shipping containers got stuck at Seal Beach, CA. Especially when multiple points of failure were blamed for the backlog at the port:

Shortages of workers, equipment, and a lack of coordination across the transportation industry created a ripple effect.

The Biden Administration isn’t helping to deflate the situation either… The defensive tone of their press conferences, the finger-pointing, the “high-class problem” or bizarre justifications followed up with promises to make everything right again

Wolf’s article went on to highlight gardening supplies, clothing, building materials, food, and general merchandise as some categories that are suffering because of these logistical nightmares. It’s just a mess.

And even if this global logistical nightmare doesn’t cancel your holiday plans, one long-term issue still lurks that can make those plans much more expensive.

Here’s a year-over-year comparison of inflation in several categories of consumer items: 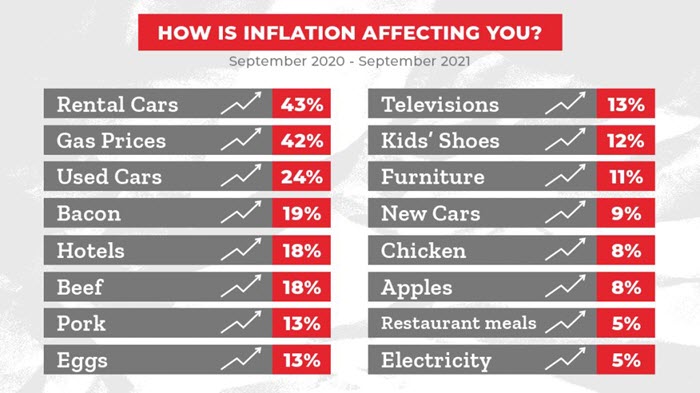 Of course, the official tally for overall inflation includes everything, and sits at 5.4% just for the month of September 2021. But that isn’t likely to be the entire story either.

That’s because once you factor in the average consumer’s need to maintain a basic standard of living, “real” inflation is much higher, as you can see reflected below: 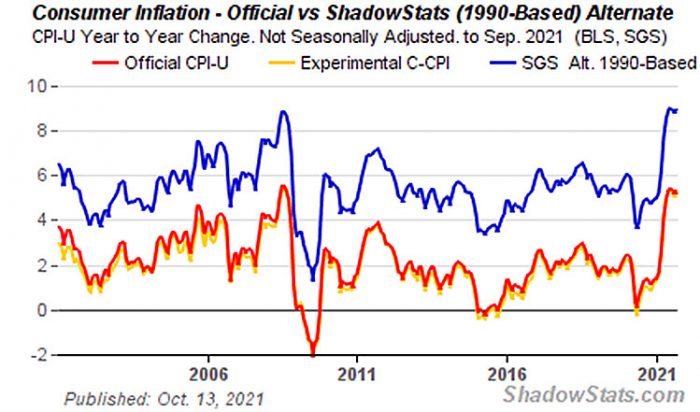 The blue line represents the methodology used by the Federal Reserve in 1990 to calculate inflation and account for a consumer’s basic standard of living, and it’s close to 9%.

So hopefully U.S. consumers don’t have to live out a real-life version of “The Grinch Who Stole Christmas.” We’ll have to wait and see how it plays out.

But much higher prices should be expected, at least in the near-term.

These are indeed strange times to be alive.

As you read above, both global supply chains and the American economy are highly complex systems, and can be disrupted. In fact, panicked governors did just that in March 2020 shut down the economy with a few strokes of the pen.

With that in mind…

Maybe it’s a good idea to consider getting your hands on something the opposite of “complex systems,” something simple and easy to understand. Something that won’t let you down regardless of the global economy – something like physical gold or silver?

The alarm bells of inflation, supply chain disruptions, and an overvalued stock market are all sounding at the same time. You don’t need to understand why things are off-track, so long as you understand your plan to protect yourself and your family from the consequences of this sort of complex systems failure.

Many who buy tangible assets like physical gold and silver do so to give themselves the gift of peace-of-mind. Really, what more could anyone ask for?

Another COMEX Gold Price Smash
3 reasons why traders expect Bitcoin to retake $60K before November ends
How Much of All Money Is in Bitcoin?
8 Cheaper Ways to Raise Cash Than Car Title Loans
Holiday Gift Guide 2021: Best Gifts For The Home Under $100