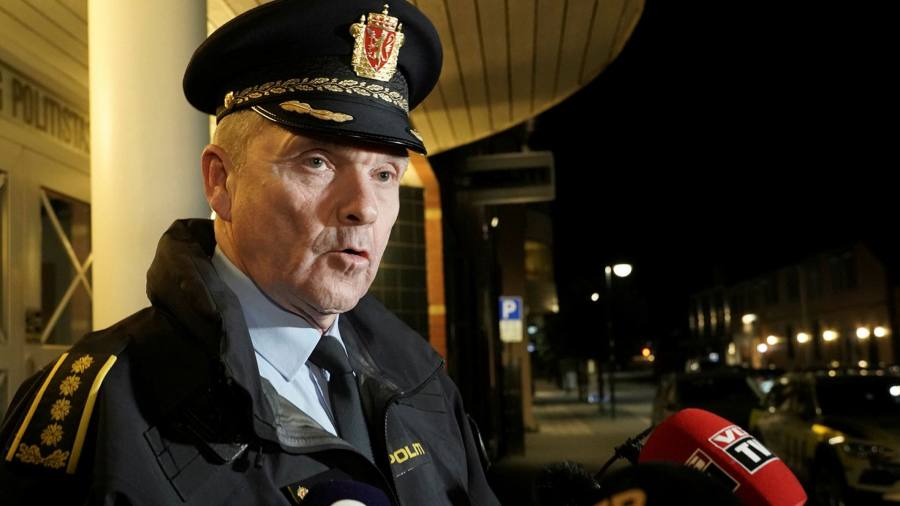 Norwegian police are investigating a potential terrorist attack after a man killed five people using a bow and arrow.

Police in Kongsberg — a town 70km west of the capital Oslo — said there were “grounds to evaluate whether this is a terror attack” after confirming the number of fatalities in the attack carried out by a lone man who was arrested.

They said two people had been seriously hurt and were in hospital though not with life-threatening injuries, including an off-duty policeman.

Overnight, police charged a 37-year-old Danish citizen. His defence lawyer told Norwegian media he had co-operated with police and shared details of the attack early on Thursday.

On Wednesday evening, Norwegian police issued a temporary order for officers to carry weapons after the attack.

Police declined to give further details or speculate on motive but confirmed there had been a confrontation between the attacker and officers after the suspect initially fled, with warning shots fired.

“We are keeping an open mind, also that it could be a terror attack,” local police chief Oyvind Aas told an emergency press conference.

Over a period of about half an hour the killer moved around several locations in the town of 28,000 people, including a Co-op supermarket where the off-duty policeman was hit.

Norway has suffered several acts of terrorism by rightwing extremists in recent years including an attack on the then ruling Labour party’s youth camp as well as government buildings in Oslo in 2011 that killed 77.

Prime minister Erna Solberg, who is due to stand down on Thursday before a change of government in Oslo, said on Wednesday night: “The news is gruesome. The events shake us. I understand that many are afraid. That is why it’s important to emphasise that police are in control.”

Jonas Gahr Store, the Labour leader who won last month’s elections, said: “What we have heard from Kongsberg tonight testifies that a cruel and brutal act has been committed.”

The attack in Kongsberg, a university town and home to Norway’s biggest defence company, came on the day the new centre-left government presented its policy programme before being sworn in by the king on Thursday.

Kari Anne Sand, Kongsberg’s mayor, said: “This is a shocking event that we scarcely believed could take place in Norway.”