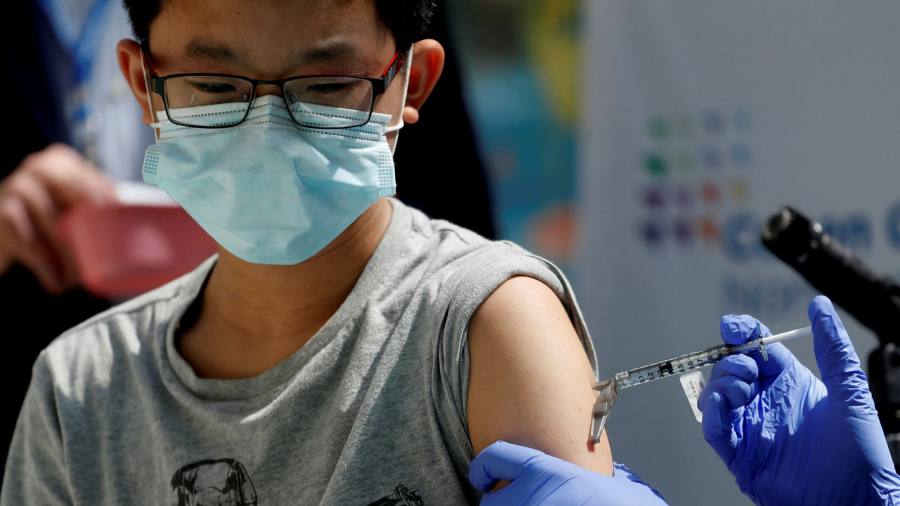 Pfizer said it expected to apply in November for US authorisation of its Covid-19 vaccine for children aged between six months and five years old as it races to expand eligibility for the jab.

The vaccine, developed in partnership with BioNTech, was the first to be authorised for use in children aged 12 and over, and Pfizer had already said it planned to apply for a green light from the US Food and Drug Administration for children aged between five and 11 years old in early October.

On Tuesday, Pfizer offered the first glimpse of its intended timeline for authorisation of the jab in infants as young as six months old. Frank D’Amelio, chief financial officer, told an industry conference the company hoped to “go file” for this age group in November.

“We would expect to have . . . data for children between the ages of six months and five years old that we would file with the FDA,” D’Amelio said. “I’ll call it in the weeks shortly thereafter the filing of the data for the five- to 11-year-olds.”

Speaking at the Morgan Stanley Global Healthcare Conference on Tuesday, D’Amelio added that the putative timeline assumed “all of the data is positive”.

Vaccinating infants is seen as a crucial step in taming the pandemic given that childcare facilities and schools can serve as breeding grounds for the virus. And rising Covid infection and hospitalisation levels in the US have propelled calls for vaccines to be made available for children, especially as schools reopen for the autumn term.

In the week ending August 14, the Covid hospitalisation rate among children aged four and under was nearly 10 times the level of the week ending June 26, according to a report published last week by the Centers for Disease Control and Prevention.

However, according to the most recent data collected in the US, the hospitalisation rate among children aged four or younger was just 2.2 per 100,000, compared with 15.8 per 100,000 among the largely-vaccinated over-65s.

Scott Gottlieb, a Pfizer director and former FDA commissioner, broadly confirmed the timeline given by D’Amelio. Speaking at a Financial Times conference on Tuesday, he said that regulatory authorisation of the BioNTech/Pfizer jab in children as young as six months old could come in “late 2021, early 2022”.

The BioNTech/Pfizer jab for the youngest children is less potent than the others. In clinical trials, children aged between six months and five years old are given a 3 microgram vaccine, compared with 10 micrograms for those aged five to 11 and 30 micrograms for adults.