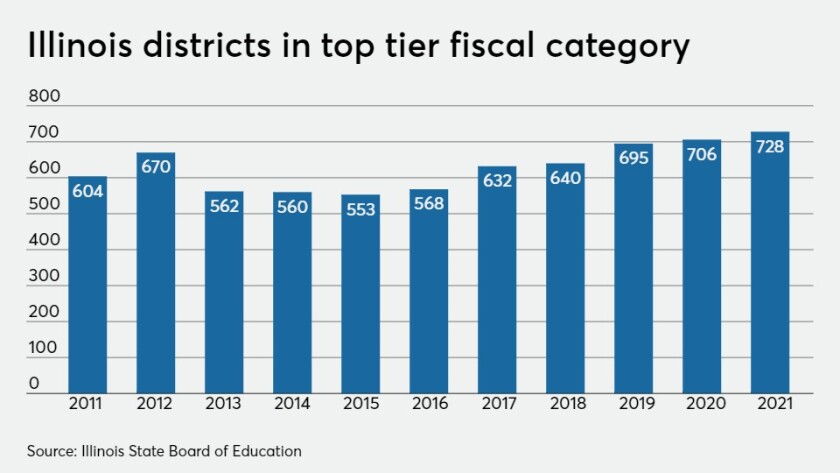 Fiscally solvent school districts Illinois increased in fiscal 2020 even as they navigated COVID-19’s impact on operations.

The number of districts finishing the year in the weakest category of financial watch declined to six from eight and 12, in fiscal 2019 and fiscal 2018, respectively.

“The 2021 Financial Profile (based upon FY 2020 financial data) reflects positive results for fiscal solvency due to increased EAVs [equalized assessed values], increased state revenue, and less reliance on debt. Districts that ISBE staff were monitoring in the past have improved their financial outlook,” State Superintendent Carmen Ayala and financial officer Robert Wolfe said in a statement to the board.

The board’s staff said it would continue to monitor the districts on the financial watch list this year, but were not aware of any districts with “immediate, significant financial concerns.”

The total statewide EAV rose by 3.3% last year enhancing tax levy ability and debt capacity. State caps limited increases to 2.1% for the year. “The increase in taxing ability increases districts’ local revenue, which could improve the fund balance to revenue, expenditure to revenue, and days cash on hand indicators,” the report said.

Districts relied less on long-term operational fund debt, issuing $295.6 million, down from $356.5 million the prior year. About 96% was issued as working cash fund bonds. Operating costs were up but so was federal funding with relief coming from the CARES Act package.

The financial profile report card has been issued for 19 years to evaluate district finances.

Districts fall into four categories based on a scoring system that evaluates five financial metrics including a district’s fund balance-to-revenue ratio, expenditure-to-revenue ratio, days cash on hand, and the percentage of remaining short-term and long-term borrowing ability.

Districts on the financial early warning and financial watch lists must submit additional quarterly financial information to the state. The state provides technical assistance to districts if they fall in the weakest category and board staff can recommend eventual certification for state intervention if districts remain in that category.

The number of days cash on hand per district remained consistent over the past five years. Most districts have between 180 and 359 days cash on hand. The Financial Profile requires a minimum of 180 days to obtain the highest score.

Chicago Public Schools remained in the category of financial early warning, where it landed the past three years. It previously was in the weakest category of watch for four years, but is exempt under some rules on supervision for those in the weakest financial watch category.

State schools received $569 million from the $13.5 billion education allocation from the CARES Act. Those funds primarily helped offset district costs as they moved to online, virtual learning and faced additional cleaning expenses to prepare for hybrid-in school learning and some was carried over into the new fiscal year.

District balance sheets for the current fiscal year that ends June 30 will benefit from a flood of new relief. About $2.25 billion from the $54.3 billion for schools in the Coronavirus Response and Relief Supplemental Appropriations Act, 2021, or CRRSA, passed in December, went to Illinois districts.

The American Rescue Plan signed in March provides an additional $5.05 billion for Illinois’ districts including $1.9 billion for Chicago Public Schools from the $123 billion for public school education.

State funding remains in flux. The state skipped the fiscal 2021 annual scheduled increase of $350 million under an evidence-based formula adopted at the start of fiscal 2018, which helped bolster balance sheets for the past few years. Gov. J.B. Pritzker’s proposed budget now before lawmakers again holds funding steady and does not provide the increase.

With the state in line to receive $7.5 billion in federal relief from the ARP, Democratic lawmakers are pressing to restore the increase as they hash out a final version of the budget before an end of May deadline even amid the expectation of the federal infusion of ARP funds over the next year.