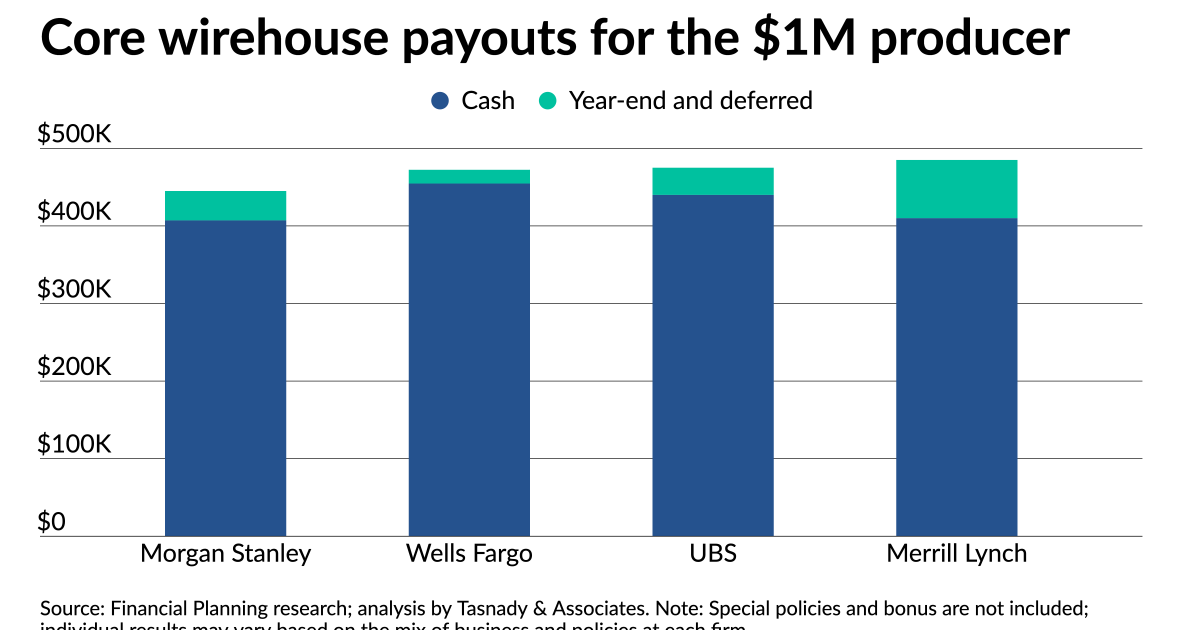 What will advisors get paid this year?

It’s a perennial question particularly from wirehouse advisors whose employers make annual tweaks to compensation. Last year, the coronavirus pandemic upended expectations, forcing some firms to postpone changes made to their 2020 comp plans — but it didn’t derail what industry insiders say are the long-term trends in advisor pay: stable core grids and perpetual tweaking around the margins.

“The large companies over the past 20 years have been evolutionary rather than revolutionary,” says Andy Tasnady, a compensation consultant.

In years past, brokerages have put in place major changes, such as the move toward fee-based business models, that have affected what they pay their advisors. But there aren’t similar changes in flight this year, he says: “You’ve had evolutionary shifts like that that have kind of completed their process.”

In the near future, tectonic shifts are unlikely to shake advisor pay. For starters, there’s too much competition, from competing wirehouses as well as regional and independent BDs, banks, RIAs and others. Should a wirehouse make cuts to the core comp grid, it would risk a raft of departures from top brokers who have many more employment options than in years past.

“I think that for the major wirehouses, grids will stay where they are. Changes will be around the margin. You’ll see more behavioral modifications, rewarding advisors for growing assets and new accounts,” recruiter Mark Elzweig says.

He adds: “It’s just too competitive a world and there is just more interest in the RIA and independent channels than there ever was.”

“For some firms, comp changes were deferred due to the pandemic and then went into effect later in 2020,” says Tasnady, who also helped develop Financial Planning’s annual compensation survey of wirehouse and regional and national broker-dealers.

For example, Morgan Stanley had intended on increasing thresholds on its grid below the $5 million mark by approximately 10% for 2020, but postponed those changes.

Wells Fargo had planned to tighten its policy on small household accounts last year, but held off on implementing the change because of coronavirus pressures. As part of its 2020 comp plan, Wells Fargo’s advisors were to be paid a flat 20% rate for households under $250,000. Previously, it was a flat rate for households under $100,000. But in April 2020, the wirehouse said it would calculate small household AUM using either its current value or its value as of Dec. 31, 2019 — whichever is higher.

Wells Fargo was one of a few firms to make notable changes to its 2021 comp plan, unveiling new monthly revenue hurdles to meet, some deferred compensation changes and new opportunities to earn bonuses.

Industry insiders say advisors could expect future tweaks to policies like payouts on small household accounts. Wirehouses and other large firms prefer small accounts be served by their call centers and robo advisors, where profit margins can be higher. And they’re making it easier for clients to sign up for these lower-end options; Merrill recently slashed account minimums for its robo advisor to just $1,000 from $5,000.

Of course, if a company replaces its strategy or is acquired by a firm with a different operating model, it’s possible even core compensation changes could be in the pipeline for advisors.

“If their strategies change, the corresponding compensation approach might change,” Tasnady says.

But in the meantime, advisors can expect comp changes to come slowly — or not at all.

The Plan to Save the Postal Service by Making It Even Worse
Stocks making the biggest moves after the bell: Kinder Morgan, Chipotle, Whirlpool & more
Intel faces profit squeeze as turnround effort begins
Elon Musk’s SpaceX beats Bezos’ Blue Origin in NASA contest to build astronaut lunar lander
7 tips for wirehouse advisors on the verge of starting an RIA