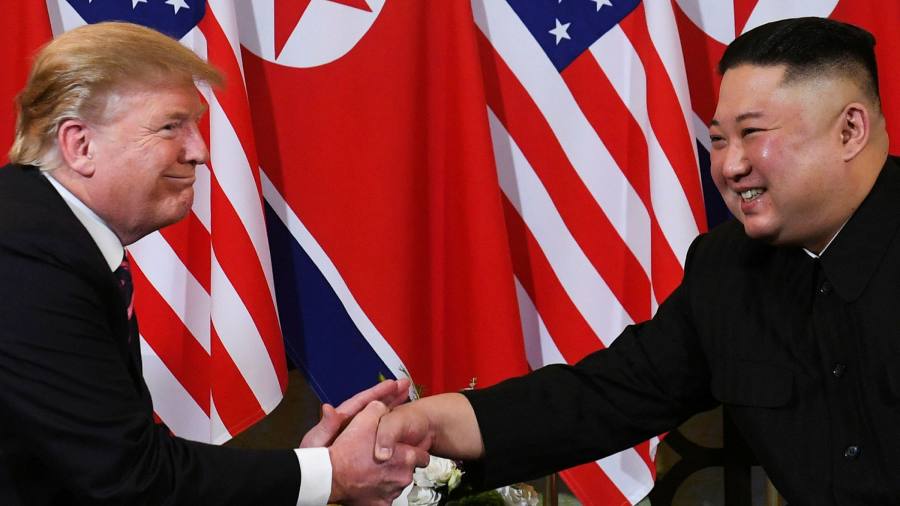 Joe Biden has been urged by foreign policy experts to secure an arms control agreement with Kim Jong Un, a potentially radical change after decades of unsuccessful US diplomacy.

Successive administrations from Bill Clinton to Donald Trump have failed to stop North Korea developing nuclear and missile technology. Washington has tried sweeteners such as US aid and allowing economic engagement with South Korea, and crippling economic sanctions — but these strategies have failed to convince the Kim regime to abandon its weapons programmes.

North Korea now boasts between 20 and 40 nuclear warheads, stoking calls for the US to shift its focus to arms control. This would mean tacitly accepting Pyongyang’s status as a nuclear-armed state and focusing on curbing nuclear development and avoiding use of existing weapons, rather than demanding compete denuclearisation.

“North Korea is not going to give up nukes. The goal is quixotic, it is unreliable, it is unrealistic . . . How long can we do the same thing and expect a different result?” he asked.

Victor Cha, a North Korea expert who served on the National Security Council during the administration of George W Bush, has said that arms control talks should in the short-term seek to “cap and contain the most dangerous elements of North Korea’s weapons programmes”.

“Such an approach has no precedent in US negotiations with North Korea, but it does have antecedents in arms control talks during the cold war,” Mr Cha wrote in Foreign Policy last month.

But to avoid accusations of softening the US stance against Mr Kim, the president-elect would have to “frame” the process as interim measures toward the goal of denuclearisation.

Jessica Lee, a researcher with the Quincy Institute, a US think-tank, noted that several of Mr Biden’s picks for national security roles had already “hinted at a more strategic approach” towards Pyongyang, including Michèle Flournoy, the former Pentagon official and leading candidate to become the first female secretary of defence.

“From a disarmament perspective, [it is] hard to see this leader in this regime, completely accepting nuclear disarmament — because it is their survival card,” Ms Flournoy said in a September interview with Defense News, referring to North Korea.

She added: “It’s more of a risk management challenge, in my view, realistically, even though we should keep disarmament out there as the ultimate long-term goal.”

Antony Blinken, who was named Mr Biden’s secretary of state last week, has also touted a process similar to Barack Obama’s Iran nuclear deal — given “the fantasy that Mr Kim will hand over the keys to his nuclear kingdom”.

“The administration may find merit in an interim agreement that requires North Korea to disclose all of its programmes, freeze its enrichment and reprocessing infrastructure under international monitoring and destroy some warheads and missiles in return for limited economic relief,” Mr Blinken wrote in a New York Times op-ed days before the Trump-Kim summit in Singapore in 2018.

However, experts conceded there were stark difficulties with offering North Korea concessions. Any such policy would face opposition in the US Congress, which has long held a hard line against the Kim regime’s weapons of mass destruction. Verifying claims of adherence to a deal by North Korea has in the past been impossible, given a lack of international access to the secretive state.

Soo Kim, a former North Korea analyst with the CIA, said incentives offered to North Korea should be grounded “on a set of feasible, rational expectations”, noting that Pyongyang had refused to comply with international weapons inspectors.

“Given North Korea’s past precedent in negotiations, its historical record in dealing with the US and of course its long-term strategy, I am doubtful that these short-term measures will add much value,” said Ms Kim, now an analyst at Rand Corporation, a think-tank.

Mr Biden has already signalled an end to the theatrical summits favoured by Mr Trump, who met the North Korean dictator three times over the past two years. The president-elect has also said he would only meet Mr Kim if he agreed to draw down his nuclear capability.

John Delury, an Asia expert at Yonsei University in Seoul, has warned the incoming Biden administration against drifting back to the Obama era policy of “strategic patience”, during which there was little engagement between Washington and Pyongyang.

Mr Delury believes the Trump administration should be recognised for shattering the taboo of US presidents never dealing directly with the Kim regime.

“When history judges Donald Trump on North Korea he will get credit for making it possible to talk directly with the supreme leader,” he said.

Six Party talks, involving the US, North Korea, South Korea, Japan, China and Russia. In 2006, North Korea shocks the world with first nuclear test but in 2007 agrees to shut down nuclear facilities in exchange for aid. Talks end in 2009 after another missile launch

North Korea reveals its new centrifuge for uranium enrichment in 2010. Since Kim Jong Un assumed power in 2011, the country rapidly advances weapons, including three nuclear tests and 40 ballistic-missile launches in 2016 and 2017

Sources: Council on Foreign Relations; US Department of State; FT