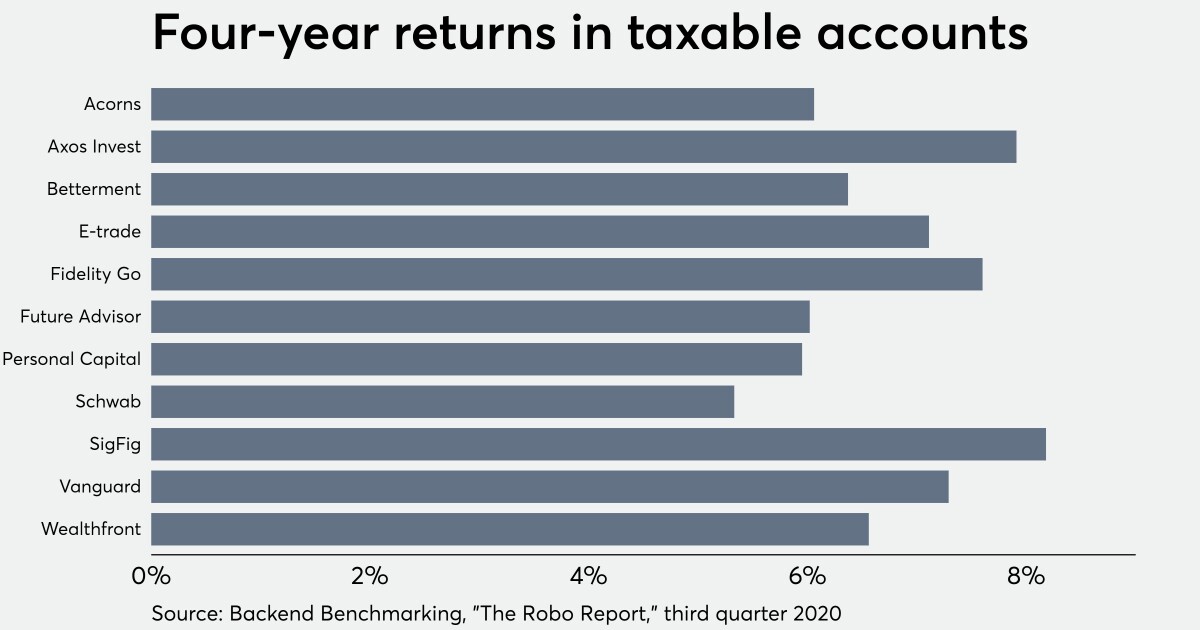 As the automated advice market matures, it’s increasingly clear that not all robo advisors are created equal.

Despite criticisms of using commoditized and one-size-fits-all approaches to investing, these firms are making unique portfolio choices that can have serious implications over the long term, according to research firm Backend Benchmarking. With nearly five years worth of performance data, including how they handled their first bear market challenge, Backend’s latest “Robo Report” examines which firms are delivering the best returns, and which are struggling.

To track performance, Backend opens and funds accounts at several robo advisors. The researchers seek similar target asset allocations in order to draw comparisons. The published results, based on data gathered since 2015, are net-of-fee, before-tax returns.

SigFig had the best overall performance in taxable accounts over a four-year trailing period, beating Backend’s benchmark (a comparable Vanguard ETF) by 0.25%. Head of research David Goldstone attributes the success to SigFig’s large-cap exposure, investment-grade Treasury and corporate bonds, and a low all-in cost for clients.

Though SigFig is best known for powering digital advice programs at large financial institutions like Wells Fargo, UBS and Citizens Bank, the firm maintains a direct-to-consumer service that is continuing to grow without any advertising, says co-founder and CEO Mike Sha. He declined to share details, but says between the retail business and institutional partners, new accounts and assets have increased 50% year-over-year.

SigFig managed $834 million, according to its most recently filed form ADV.

Sha says he hasn’t seen the Backend report but agrees with Goldstone’s analysis.

“When you’re looking at these longer-term trends, it’s the small [things] that make a difference over time,” Sha says. “We’ve tried to be thoughtful about when to make trade, keeping fees low. … We’ve always taken a view to try not to get fancy.”

Fidelity Go’s taxable accounts were nearly Schwab’s mirror opposite, having the best equity performance over four years but the second-lowest fixed-income returns of any robo Backend tracked.

“While we are pleased with the performance recognition, our focus remains on helping our customers achieve their financial goals going forward,” a Fidelity spokesperson says in an email.

While performance isn’t the only factor to evaluate the value of a robo or human advisor, it matters to clients, Backend’s Goldstone says.

“Financial planning and other [services] are also really important, but firms want investors to believe that performance isn’t,” Goldstone says, adding that he hopes his report adds more transparency to what consumers can expect when evaluating digital investing options. “At the end of the day, [performance] has a significant impact on how much money you walk away with to achieve your goals.”

Despite the lackluster returns relative to benchmarks, robo advisors are generally doing well, Goldstone says. Adoption is continuing to grow, even among wealthier and more sophisticated investors, and they offer a cost-effective, low-maintenance option for investors.

“Our accounts, which are 60-40 targets, have returned 6.76% annually over the last four years,” Goldstone writes in the report. “A decade ago, professionally managed portfolios with no minimums did not exist.”