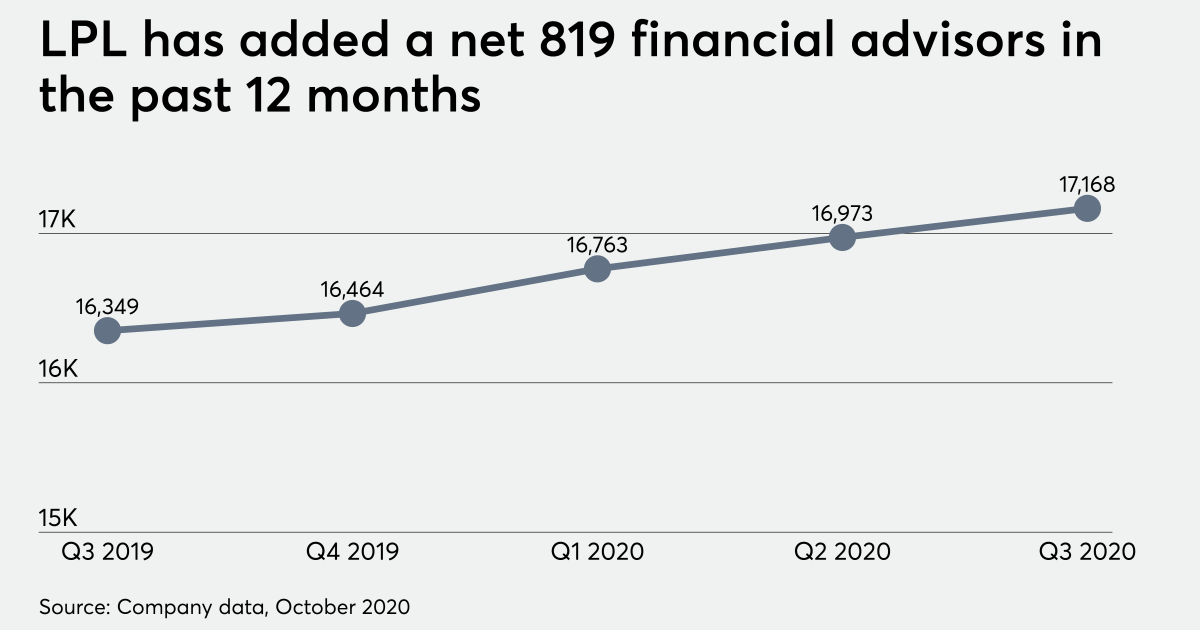 Stephen Bull and Zach Mason of Verus Capital Partners dropped Advisor Group’s Securities America to affiliate with LPL, the firms said Nov. 23. After nearly a decade with their prior IBD, the Scottsdale, Arizona-based team managed $1 billion in advisory and brokerage assets.

They see LPL as the best choice to expand the firm’s national footprint among traditional, hybrid and RIA-only advisors, Bull says.

“We have grown our team significantly over the past few years and feel confident we can grow our business even more aggressively within the next five years with LPL’s recruiting help,” he said in a statement. Bull added that the move also provides Verus’ advisors with “a heightened level of support in the areas where they need it most and across multiple practice models.”

Representatives for Securities America didn’t respond to requests for comment on the departure.

The enterprise represents the latest move out of at least a dozen in the IBD sector involving at least $1 billion in client assets this year, according to Financial Planning’s records of company announcements. LPL has completed five of the sector’s mega-moves — including an ex-Morgan Stanley team it unveiled only last week — and its two biggest poaches of 2020 as well.

Meanwhile, Securities America has lost three of its billion-dollar offices of supervisory jurisdiction this year. M&A deals like Advisor Group’s $1.3 billion acquisition of Securities America and four other ex-Ladenburg Thalmann IBDs earlier this year can often prompt advisors to consider new IBDs. LPL itself witnessed a wave of advisor exits after it acquired another IBD network in 2017.

More recently, LPL has added more than 800 advisors in the past year to reach a record headcount of 17,168 by the end of the third quarter. The firm’s latest additions formally affiliated with LPL on Oct. 16, according to FINRA BrokerCheck. Mason began his tenure with Securities America in 2011, while Bull aligned with the firm a year earlier.

The OSJ grew out of Bull’s independent practice, Bull Capital Management, which he launched in 2003 while he was affiliated with the firm then known as AXA Advisors. Besides Bull’s decade-long tenures with Securities America and Equitable Advisors, he spent six years with Next Financial Group.

Bull also started a hybrid RIA in 2003 under Verus (which means “truth” in Latin, “earnest” in Icelandic and “faithful” in Russian, according to the firm’s website). The hybrid RIA has $640.5 million in assets under management across more than 3,000 accounts, according to its latest SEC Form ADV. Verus supports at least two practices with at least $100 million in client assets.

The firm lists Charles Schwab and TD Ameritrade as custodians. With the move, Verus has added LPL to the RIA custodial options. In addition to its Scottsdale headquarters, Verus has another location in San Diego — where LPL has one of its three corporate offices.

LPL is “honored to be their choice for enhanced service and support to help them expand their team and deliver more value to their clients,” Rich Steinmeier, LPL’s divisional president of business development, said in a statement.