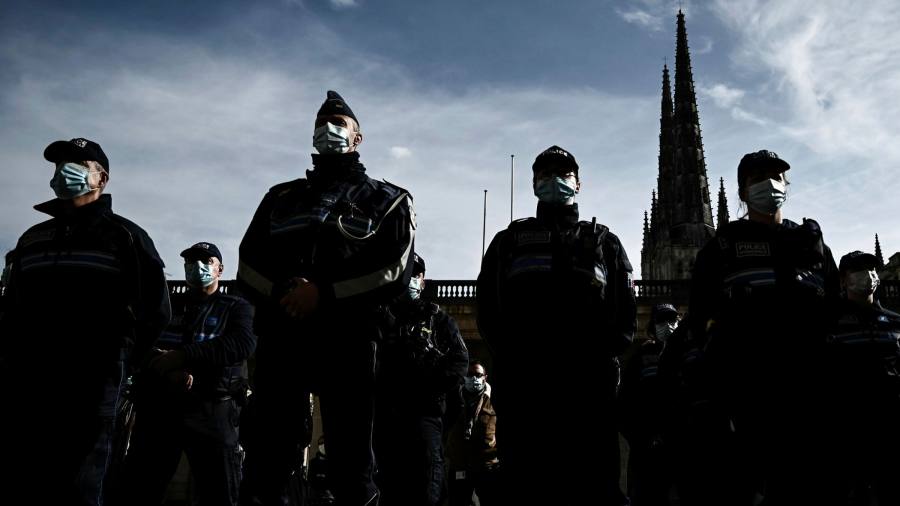 President Emmanuel Macron’s government has launched a crackdown on Islamists in France after the decapitation of a history teacher by a Chechen Muslim refugee, questioning dozens of militants suspected of promoting violence and announcing plans to ban radical organisations.

“Islamists should not be able to sleep easy in our country,” Mr Macron said after an emergency inner cabinet meeting at the Elysée Palace on Sunday with Jean Castex, the prime minister, and Jean-François Ricard, the anti-terrorism prosecutor. “Fear is going to change sides.”

Gérald Darmanin, interior minister, said on Monday he would propose a ban on several organisations deemed “separatist” for seeking to bypass the secular institutions of the French republic, including the Collective against Islamophobia in France (CCIF), and a humanitarian aid group called BarakaCity.

“You can see how political Islam combines with radical Islam and so eventually leads to terrorism,” Mr Darmanin said on Europe 1 radio. “We must fight political Islam with the same determination as we fight terrorism.” He said 51 organisations would be inspected by the state this week.

Mr Macron, who had already announced tighter controls on Islamist radicals in a speech at the start of the month, is now under pressure from politicians from left to right to take an even harder line against militants.

Even Jean-Luc Mélenchon, the head of the extreme-left La France Insoumise (France Unbowed) party, who has himself been criticised by the right as “Islamo-leftist”, condemned “Islamist terrorism” and suggested targeting the Chechen immigrant community.

Politicians from the centre-right and the far-right spoke of “war” between Islamists and the state. Marine Le Pen, leader of the extreme right Rassemblement National, demanded “war legislation” against the “bellicose ideology” of Islamism.

French police have detained 11 people — four of them relatives of the assassin — after 18-year-old Abdoullakh Abouyezidovitch Anzorov used a large knife to decapitate teacher Samuel Paty outside the school where he had shown caricatures of the Prophet Mohammed to pupils in a lesson about freedom of speech.

Investigators are seeking to find out how Anzorov, who was shot dead by police, became motivated to carry out the murder, and what role was played by social media groups such as Facebook and Twitter.

Brahim Chnina, the Muslim father of a pupil at the school in Conflans-Sainte-Honorine near Paris, complained to the headmaster after the freedom-of-speech lesson and posted three videos calling for action against Mr Paty.

In the third video, and on his visit to the school, Mr Chnina was accompanied by Abdelhakim Sefrioui, an Islamist militant categorised by the French intelligence services as “S”, which means that he is regarded as a potential security risk.

Mr Darmanin said Mr Sefrioui had “clearly issued a fatwa” against Paty. Both Mr Chnina and Mr Sefrioui are among the 11 people arrested in the aftermath of the killing.