SpaceX owner and Tesla CEO Elon Musk reacts during a conversation at the E3 gaming convention in Los Angeles, June 13, 2019.

“Deliveries may provide a pop, but earnings may cause a drop,” UBS analyst Colin Langan said in a note to clients on Friday. “We expect losses in the second half to increase as deliveries likely soften and the impact of pricing actions continues to weigh on margins.”

UBS said if Tesla can show a strong recovery in deliveries in the second quarter, close to its 90,000 to 10,000 target, “it would likely appease bulls,” Langan said.

Langan said a key concern for margins is the $2,400 average estimated Autopilot price cut. There will be a profit decline per car and 70% of buyers chose the autopilot option, UBS estimates. 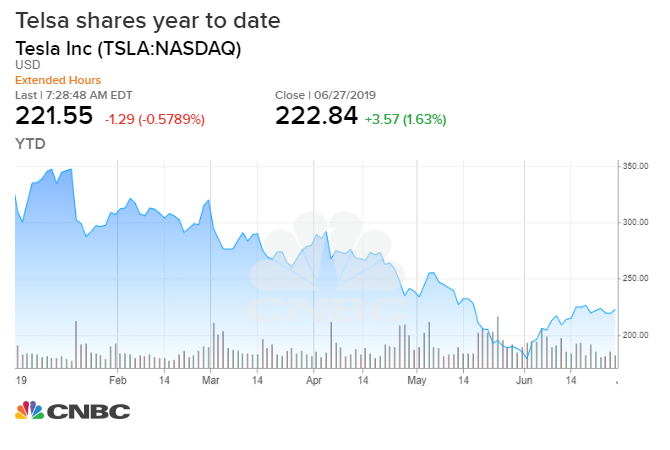 Shares of Tesla have suffered in 2019. The automaker’s stock is down 33% so far this year.

— with reporting from CNBC’s Michael Bloom

Grayscale Surpasses $10 Billion in Crypto Under Management With Over 500,000 BTC in Bitcoin Trust
NEW MEDICAL STUDY: YOUR FACE MASK IS NOT PROTECTING YOU
Tax Deductions That Went Away After the Tax Cuts and Jobs Act
Billionaire Ken Griffin Bets on These 3 “Strong Buy” Stocks
SAFEGUARDS IN PLACE. SERVERS RAIDED. PATRIOTS HAVE IT ALL.