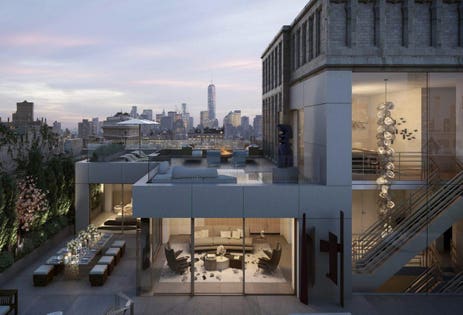 The new floors of the 212 5th Ave penthouse.

Pre-war buildings bring glamour, authenticity and a lot of headaches. To make this 1912 former manufacturing warehouse into a 48-unit luxury condo building the developers had to wrestle with a steel structure that didn’t rise in straight lines and deal with pieces of the building’s facade that had fallen off and were laying in rubble on the inside. The major overhaul hasn’t deterred sales at 212 5th Avenue, with developers announcing last month that the building is 90% sold and only six units remain. One of those units is this 10,000 square foot penthouse currently asking $58 million. It had been asking as much as $73.8 million, ranking it near the very top of most expensive condos in New York City. But even with its price cut it is still in the top twenty.

The five-bedroom, eight-bath triplex joins the trend of its NoMad neighborhood (“north of Madison Square Park”) which has seen strong growth in the amount of luxury condominiums coming on the market. It hasn’t yet charted on the list of most expensive neighborhoods in Manhattan, but according to data from Redfin the median list price for a home here is $2.79 million and asking prices have increased 8.2% since March of last year, while the number of listings has decreased 8.4% in the same time frame. It’s popularity is on the up and up as old buildings deliver new condos. The increased demand gave the development team, Madison Equities, the idea to build two entire new floors to create this three-level unit, making it one of the neighborhood’s largest trophy properties. It comes with an additional five thousand square feet of outdoor space, part of which has a floor built from glass to provide a skylight to the interiors below.

The interiors, designed by Pembrooke & Ives, have kept things neutral especially in the kitchen with a beige palette and appliances that disappear into the walls of the room. An attached butler’s pantry is at one end of the kitchen.

The master suite is a seven room wonder with an adjacent sitting room that walks through to another master bedroom, two walk-in closets, a large bathroom and a ‘master suite hall’ with breakfast bar to save going to the kitchen.

As this shot shows, the industrial windows from the building’s former existence have been preserved and are part of what make the unit feel so spacious.

A sunroom with full sliding glass doors looks out onto the terrace.

The living room with working fireplace also has small skylight to let the light in.

Hot, Hot, Hot! Mortgage Purchase Applications UP 6% WoW, Refi Applications DOWN -3.1% WoW As Fed Keeps Massive Covid Stimulus In Place (AEI Home Price Index UP 17% YoY In May)
Wisconsin debt manager Dave Erdman readies move to Baker & Tilly
What Fees Do You Pay on a Home Equity Loan?
Our Economy In a Nutshell
Biden: “We Need More Money To Plan For The Second Pandemic. There’s Going To Be Another Pandemic.”