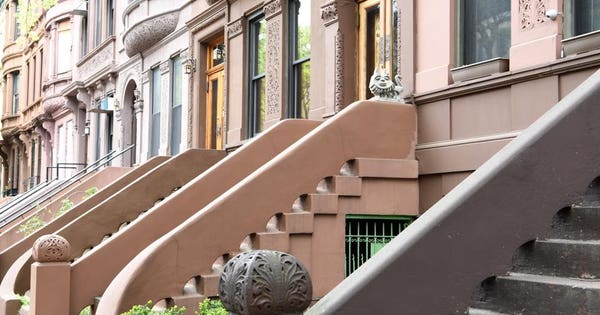 Saving for a down payment on a home in New York City can take nearly two decades, according to a new report.

The current median sales price is $637,250 in New York City, according to StreetEasy. That’s nearly three times the national median of $230,100.

Since New Yorkers aged 25 to 44 earn a median of $70,406 per year, according to the 2017 census, if they save 10% of that income annually, it would take roughly 18 years to come up with a 20% down payment, compared to eight in the rest of the country, a study from the listings site found.

When New Yorkers do buy a house, however, they’re in it for the long haul, StreetEasy reported. Starter homes are a norm elsewhere, but in New York City, 71% of home buyers have stayed in their first properties for a median of 18 years.

Buyers in the Big Apple are also a little older than those in other cities and states, according to the report. The average home buyer in New York City is 37 years old, compared to the national average of 34. That may have something to do with the trend among New Yorkers to get married and have kids later in life than in the rest of the United States, but the primary hold-up is likely to be the high cost of living.

Despite these figures, however, all hope is not lost, experts said. Properties are expected to flood the New York City sales market this spring, sending prices down and giving buyers a leg up.

“There are tons of options on the market, and sellers are getting anxious and starting to make cuts to their prices,” StreetEasy data scientist Nancy Wu said. “As the spring home shopping season kicks off, we expect these dynamics to strengthen, keeping buyers in the driver’s seat to negotiate aggressively for the price they want.”

Meanwhile, there are homes for sale around the city that are less expensive than those in the new developments and hot neighborhoods that skew average numbers upward, added Lawrence White, an economics professor at the New York University Stern School of Business.

“This is an expensive area, there’s no question,” White said. “That does make the home-buying process a bit more frustrating and a bit more difficult, but not as difficult as that 18-year number would indicate.”

For those are hoping to buy in the boroughs, Mark Maimon, vice president at Freedom Mortgage, suggested looking into Federal Housing Authority loans, which can require as little as 3.5% for a down payment. His company also offers options for 90% financing, relative to the purchase price, on loans of $2 million or less.

However, he warned, while less than 20% may be acceptable in the suburbs, it may not compete with other offers for apartments in Manhattan. That being said, “you can get a nice house on Long island, or in Westchester or New Jersey, for $300,000 or $400,000 and you can put 3.5% down,” Maimon said. “You also get a house, not a small apartment for a million bucks.”

Stock markets turn lower on concerns over economic outlook
Growing Idaho Falls SD clearing old debt to make way for new
Falling House Prices And The Elections In 2022 And 2024
Behold, Beneath A Santa Ynez Valley Estate Lies The King Of Wine Kivas
What if the Fed can’t stop inflation? This is when Bitcoin’s bear market could reverse