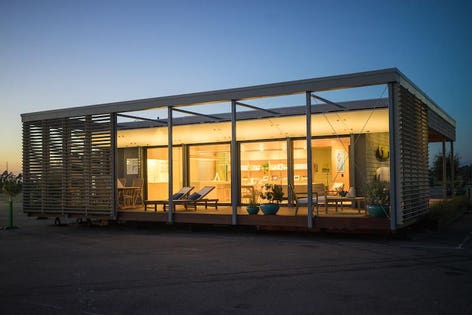 The SU+RE House was designed and built by the students from Stevens Institute of Technology for the 2015 Solar Decathlon event and built modular. The large overhangs include “storm shutters” that shade the house in the open position and can be lowered to protect it from water, debris, and vandalism during a devastating storm.Photo courtesy of Juan Alicante for Prefabulous Small Houses, published by Taunton Press

One of my favorite events in the last decade plus is the Solar Decathlon. Many people are still unfamiliar with this event, although it has been held every other year since 2002 in the United States. It was initially held in Washington, D.C. and then in Irvine, California and Denver, Colorado. In 2020 the event is returning to the D.C. area; a wonderful opportunity for all to see innovation in construction first hand.

Visitors line up to tour the house built by students from Middlebury College at the U.S. Department of Energy Solar Decathlon 2013 at the Orange County Great Park in Irvine, Calif. on October 13, 2013. The team’s exterior solar path replaces the traditional rooftop array to create an exterior walkway shaded by solar panels.Stefano Paltera/U.S. Department of Energy Solar Decathlon

Since 2011, events have also been held in Spain, China, and Colombia. Thousands of students from colleges around the world have designed and built houses to compete in the event, which are efficient at collecting and converting sunlight into usable energy. Since 2002, more than 160 collegiate teams have participated in the U.S. Department of Energy Solar Decathlon, organized by the National Renewable Energy Laboratory.

The operable storm shutters on the SU+RE House are secured open above the deck area of the south side of the house. This deck also helps to expand the interior living space of the house.Photo courtesy of Juan Alicante for Prefabulous Small Houses, published by Taunton Press

What is most exciting about these events are the ingenuity and creativity that goes into designing and building these houses. Students and faculty find new ways to make the houses more comfortable, energy efficient and use the space most effectively.

At the 2015 event in Irvine CA, the students at Stevens Institute of Technology, for example, tackled the effects of climate change which causes major storms and loss of power during those storms, with their SU+RE House. They built a house that could withstand these storms while also providing electricity and hot water when power is lost. They also developed cutting-edge techniques for protecting against flooding, and protecting the house with efficient insulation and air-sealing. The houses are prefabricated with striking results.

One of the first events I attended included the 4D House, a modular construction built by the students from MA College of Art and Design and University of MA Lowell. The house had a central spine or truss with a track that separates the private areas from the public ones. The walls are moveable so they can be opened or closed as the need arrises for larger space. The house was built to Passive House standards although it couldn’t be certified because it wasn’t permanently located at the time.

The 4D House was designed and built by students and faculty of Team MA.Photo courtesy of Julie Chen/Team MA for Prefabulous + Almost off the Grid, published by Abrams

This shows the partition closed hiding the master bedroom of the 4D House.Photo courtesy of Jim Tetro for Prefabulous + Almost off the Grid, published by Abrams

With the partition opened , the rear room of the house, set up as a master bedroom, can expand the living room/entertainment space.Photo courtesy of Jim Tetro for Prefabulous + Almost off the Grid, published by Abrams

Visitors tour the prefabricated houses, where student guides describe the mechanics, systems, and materials, and explain why they chose those options. The contests within the competition are architecture, market appeal, engineering, communications, comfort, hot water, appliances, home entertainment, and energy balance. In 2013, affordability was added to address global economic struggles but also because many people today consider affordability a major priority in construction.

This First Light House built by the students at Victoria University of Wellington in New Zealand, using modular construction,  was named for one of the first places on the earth to see the sun rise each day.Photo courtesy of Jim Tetro for Prefabulous World, published by Abrams

Many houses built for the events continue to be used in various locations around the world to educate people about energy efficiency, conservation and sustainability.

In this First Light House every bit of space was well used. Here the sleeping bunks expand the capacity for overnight guests, with sliding doors that can hide these beds away.Photo courtesy of Jim Tetro for Prefabulous World, published by Abrams

There will be an event in Washington DC in July 2020, when seven teams from the US and four international teams will compete.  There will also be several events around the world including in Budapest, Hungary this July, in Benguerir, Morocco this September, and in China and Dubai, UAE in 2020. I encourage anyone who can attend one of these events to do. They are inspiring and enlightening.

For further information, visit the website of the Solar Decathlon.