The Federal Reserve’s March meeting was expected to have been uneventful. Instead, it helped set off what is now a week’s worth of upheaval in global bond markets that could still have a ways to go.

Across the world’s financial markets, bond yields have been sliding as investors jump into sovereign debt and the expectations are growing from New York to Sidney that central banks will be cutting interest rates before they ever raise them again. Germany’s 10-year bund yield turned negative again, falling to minus 0.09 percent Wednesday, and the U.S. benchmark 10-year fell to a low 2.34 percent, its lowest rate in more than a year.

Stocks had been shaking off the sharp drop in bond yields, which move opposite price. But on Wednesday, equities became tethered for much of the day in a more traditional way to fixed income markets, as stocks tumbled on global growth concerns. The Dow, however reversed steep losses, ending the day little changed.

“Even though in {Fed Chairman Jerome] Powell’s words, the Fed doesn’t think they changed anything, they changed a lot, and it has just exploded through the bond market,” said Ward McCarthy, chief financial economist at Jefferies. “They basically have said a fed’s fund rate of around 2.5 percent is normal, and a $3.8 trillion balance sheet is normal.”

The Fed left interest rates unchanged after its meeting Wednesday, but released new forecasts showing no more interest rate hikes this year, down from a prior forecast for two more. It also said it would end its program to unwind its balance sheet in September.

“There’s no doubt the Fed caught people by surprise by pivoting more last week to lean more dovishly than even we, or others with a dovish view expected,” said Julian Emanuel, BTIG head of equity and derivatives strategy.

Bond pros said some of the week’s market moves have been perplexing, and many blamed them on quarter end portfolio maneuvers and on other technical factors, such as convexity buying or hedging.

Convexity buying might occur when homeowners refinance their mortgages, eliminating securities that fund managers had expected to hold for several more years. The fund manager, may in turn look to the Treasury market to make up for that portfolio ‘duration.’ Strategist say convexity-related buying was weighing on the 10-year Treasury yield in recent sessions.

“{The Fed] was the catalyst that opened up the window…It’s more about what did the Fed know and what are they worried about. They pulled a 180, and they pulled another 90 degrees on easing last week. What is they they know that they’re not telling us,” said Andrew Brenner of National Alliance. “What you have here is a fear of something happening in Europe. Even Draghi this morning make comments that he’s very worried.”

European Central Bank President Mario Draghi spoke ahead of the U.S. market open Wednesday, and yields at that point fell to their low of the day when he suggested he could give some relief to banks on negative rates, said Peter Boockvar, chief investment strategist at Bleakley Advisory Group.

“That implies if he makes a tweak, he’ll be able to deal with negative rates for longer. I think that ‘s why you got anotehr leg down on European bond yields, which are dragging our yields lower,” Boockvar said.

Analysts said yields could head even lower, but that a positive stream of economic data or a substantial U.S. China trade deal could help reverse the move.

While pressure could remain on yields, the worst of the moves could be coming to an end. Strategists said some of the technical factors should fade as the quarter end passes.

Although Treasury yields hit a fresh intraday low, the fact that the market saw sellers was encouraging, as yields regained some ground. Strategists also pointed to a weaker 5-year auction Wednesday afternoon, after Tuesday’s strong demand for 2-year notes.

“This is encouraging that we might be finding a footing, but it’s too soon to tell,” said Mark Cabana, head of U.S. short rate strategy at Bank of America Merrill Lynch. 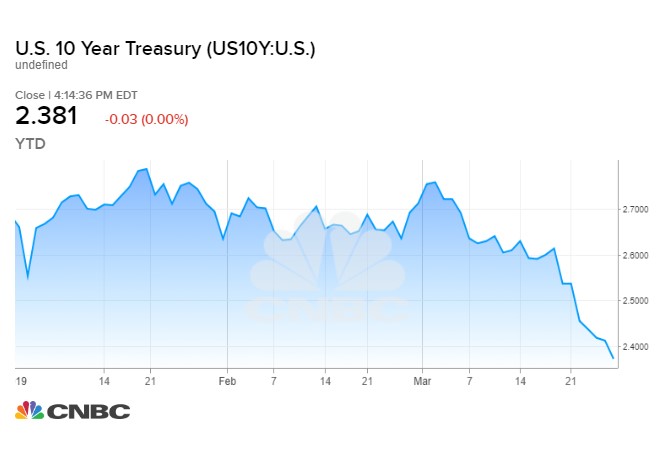 While some of the bond moves can be be explained away, the outstanding question is what changed to force a massive repositioning in bond holdings.

“I think it’s a little bit of feeding off of itself in terms of concerns. The questions we’ve been asking yourself is what’s changed in the past week. The things that have changed are the Fed’s reaction function, or their outlook. It’s a lot more dovish than we thought. Their outlook is a little less optimistic than we thought,” said Cabana. He pointed to the negative German but said the outlook is just slightly worse than it had been.

That data resulted in the U.S. 10-year yield and 3-month yield inverting, with the 10-year yield sliding below the 3-month. For many in the markets, that is a signal of recession. One reason is that banks make loans that are longer term, but they borrow at shorter term rates.

Fed officials last week also pared their economic forecast for growth to 2.1 percent from 2.3 percent this year and 1.9 percent from 2 percent next year.

“The Fed panicked, and so the bond market panicked and it forced anyone who was short duration to start buying duration. The thing is it’s just not clear what has prompted this. Part of it is that they’re below their inflation target. But the measures they’ve taken are way out of proportion to the problems they’re having with inflation,” said McCarthy. “Some of it was they revised down their growth forecast. Their forecast was revised down more than inflation. That suggests they see storm clouds on the horizon.”

On Monday, the market continued to push forward on the view that the Fed will now be in a position where it has to cut interest rates. The fed funds futures market began pricing in 25 basis points of easing for this year, after having expected a hike just a few months ago.

“it does mean there’s a bit of repricing in the rates market…and it’s largely due to what we know about he Fed. Does that mean the Fed will follow through with what the market is expecting? They’re really very much in a wait and see mode. They will be more proactive in managing downside risk and that is why the market is pricing in one cut this year and another cut next year,” said Cabana.

Cabana said BofA does not expect a recession this year, and rate cuts are not widely expected by Wall Street’s Fed watchers. But the markets are expecting cuts, even though the Fed forecasts one hike for next year.

“The data does not suggest the Fed needs to react imminently. The market seems to think the Fed ultimately will because of how the risks are shifting. There’s a lot of issues that the market probably feels the Fed has become extraordinarily dovish, will want to react somewhat proactively in the face of downside risks, and the market may believe they can push the Fed given that they have responded to the market feedback over the course of the whole first quarter,” he said.

Strategists said the bond market was also paying attention to the comments of Stephen Moore, President Donald Trump’s latest nominee for Fed governor. Moore, a fellow at the Heritage Foundation, told the
New York Timeshe believes the Fed should cut rates by a half percent.

McCarthy said Moore was not being given much credence but his comments were a factor.

Barry Knapp, managing partner at Ironsides Macroeconomics, said he believes a lot of the market’s extreme moves will go away after the markets adjust for quarter end this week.

Knapp said the extraordinary easing policies of the global central banks have impacted the markets and are behind much of the distortion. The bond market used to be a reliable growth indicator with the 10-year yield just below nominal GDP.

But that has changed. “You still get this conundrum where people tell you the bond market says the economy is weakening and the stock market tells you it’s alright, and you have to believe the bond market,” he said. “But it hasn’t’ worked as an implied growth indicator for decades.” Knapp said global savings, China’s currency peg, and all the central bank activities are distorting the market. “I don’t think the bond market is telling you anything meaningful about growth and it’s just the wrong read.”

Boris Johnson insists he will not undergo ‘psychological transformation’
Gold price tumbles over ₹1000 in a week. Is this dip a buying opportunity? | Mint – Mint
Inside Atlantic Union’s decision to sell its profitable RIA unit
The 5 most revealing questions advisors can ask their clients
UK financial services co-operation with EU hit by Northern Ireland row