Beware market bulls: The stock market’s stellar rebound this year could be driven merely by a short-lived trend.

Investors started this year in a buying mood, pushing up prices of last year’s laggards, which is the logic behind Wall Street’s “January effect,” a theory that there is a seasonal rally in stocks during the first month of the year following a December decline due to tax reasons. This year’s effect was particularly overblown given the magnitude of fourth-quarter’s sell-off and investors shouldn’t buy this comeback, according to Nicholas Colas, co-founder of DataTrek Research.

Since 1950, January has averaged a gain of about 1 percent in January, according to the Stock Trader’s Almanac.

“Our advice for Q2: forget the last 90 days ever happened. The S&P 500’s 11 percent bounce YTD was basically a January Effect on steroids with a Fed policy change adding gasoline to that fire,” said Colas in a note to clients on Tuesday. 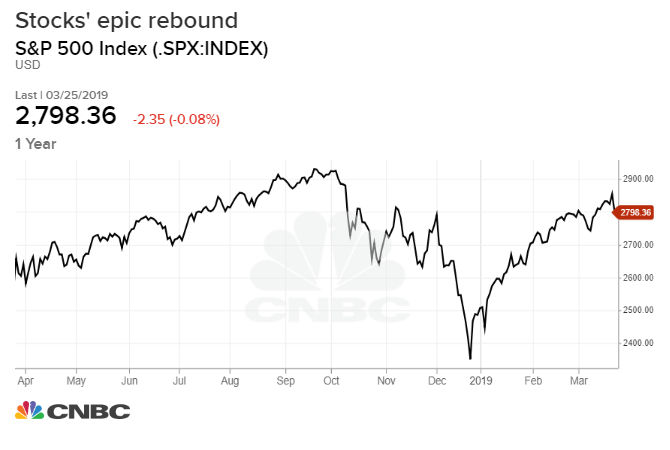 The laggards from 2018 have come back much stronger than the market. Case in point: The best performer in the S&P 500 is Coty, which has gained more than 71 percent after bleeding 67 percent last year. Same goes to Xerox, the second best performer in the index, which scored a whopping 58 percent return year to date after losing more than 32 percent in 2018.

Sometimes the “January Effect” is used to reference a jump in small cap stocks near the end of a year and into January, a theory popularized by the Stock Trader’s Almanac. The iShares Russell 2000 ETF, a benchmark for small stocks, is up 13 percent this year, more than big caps.

Stocks’ epic rebound has had many on Wall Street scratching their heads because it was not fundamentally driven and in fact earnings growth expectations has been cut dramatically in the first quarter and the bond market is flashing a big recession signal. Going forward, the market will have a tougher time sustaining the gains without the helping hand of the January effect, Colas and others said.

“The January Effect rally is done. A stand-still Fed is baked into asset prices. Second quarter 2019 dynamics will look nothing like the first quarter,” Colas said. “For Q2 we see heightened volatility, the real possibility of lower asset prices, and a Fed that will need to shift policy once again.”

First-quarter earnings are slated to come out next month. Wall Street is projecting a 3.4 percent earnings loss for the S&P 500 firms, while 73 percent of the companies have already issued negative EPS guidance, according to FactSet.