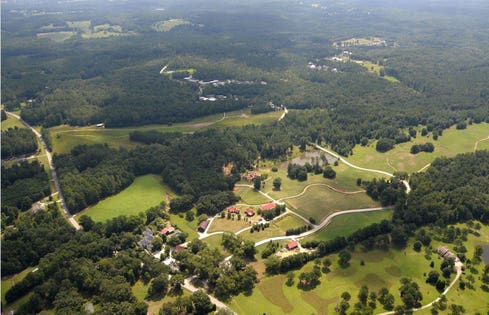 This is an aerial view of the Serenbe community.Photo courtesy of Serenbe.

Several years ago I had the great opportunity to tour the Serenbe community. It was pure delight to walk along the paths, lined with fruit trees and other edible plants and be among this tranquil oasis. Just 30 minutes from the local airport in the Chattahoochee Hills, it is close to Atlanta but in its own contained serene world. The name of this community, Serenbe came from the idea of “a place to be serene,” which is aptly named.

Serenbe is the brainchild of founder Steve Nygren. One weekend on a country drive just outside of Atlanta with his family, he discovered acres of rolling farmland only 35 miles from the center of the city, along with a 1905 farmhouse and instantly fell in love with the area. In 1991 when he had an opportunity to sell his successful restaurant company, the Pleasant Peasant, he purchased the little farmhouse and the surrounding land. Three years later he and his family relocated there. At first the Inn was a Bed and Breakfast for family and friends, but it became so popular, he turned into to the full-service Inn at Serenbe with 27 rooms and numerous guest cottages throughout the property.

There are numerous shops and areas for people to meet and chat.Photo courtesy of J. Ashley Photograph

After living on the land for seven years in retirement, Steve and his oldest daughter Garnie were on a run one afternoon and discovered a bulldozer taking down 20-acres of trees on an adjoining property. Worried that the neighbor’s property was headed towards urban sprawl, with strip malls and cookie-cutter houses, they decided to buy and preserve the beautiful countryside and support a sustainable development. They spent time traveling, researching and developing a plan to create a better way to live, building in a more biophilic way (a term that describes human’s innate tendency to seek connections with nature), conserving land and creating the community of Serenbe. By 2004, the first house in the Serenbe community was built; today the community has grown to 360 homes with around 700 residents. Housing options are numerous with single-family homes, townhomes to buy or rent, apartments to lease, or live-work situations. All of the homes are Earthcraft certified by Southface for energy savings. And the majority of the homes and commercial buildings are geothermal and many of the homes have solar panels. One of the custom houses, built in Serenbe appeared in one of my earlier books – Prefabulous World.

The Simblist House in Serenbe was built with post and beam and a panelized system. It was built to Earthcraft specifications, like all of the houses in Serenbe.Phot courtesy of Chris Nelms for Prefabulous World

Over the years Steve and Garnie have developed 1,200 acres of forests and meadows creating over 15 miles of nature trails that connect the homes. Seventy percent is protected green space that is divided among five neighborhood hamlets, the fourth and fifth are in the planning stages.  Each hamlet is focused on what adds to a well-lived life: arts for inspiration, health for wellbeing, agriculture for nourishment, play and education for awareness.

The farmers market sells produce grown in the farms of Serenbe. It is another opportunity for people to meet and mingle.Photo courtesy ofJ. Ashley Photograph

There are educational facilities with an Acton Academy  and Montessori school and a 25-acre organic farm which sources 100+ Community Supported Agriculture (CSA) shares. This community is geared to those who want to be active with trail riding, stables, bikes available to rent, yoga and a Pilates studio, spa, gym and indoor cycling studio, bocce ball courts, in-ground trampolines, animal village, lakes for paddle boarding or canoeing, labyrinth, trail riding, ropes course, and natural amenities including a waterfall, and edible and medicinal landscaping.

There is also a General Store, 30 plus other shops and businesses. Hundreds of thousands of visitors each year go to The Inn and can enjoy the five beautiful restaurants there with a sixth coming this Fall.

Serenbe is known for its extensive arts programming with year-round artist residencies, a top ballet theatre, Terminus, and Serenbe Playhouse, winner of a Schubert Foundation Grant, recognized by Playbill as Top 20 Regional Theatre in the country and Fast Company’s list of the 50 Most Innovative Companies in the World as well as a nationally recognized outdoor theatre company.

The playhouse hosts 400-500 people a night during the play season, and there are artist talks and workshops, architectural tours, wine dinners, weddings, conferences, and more.

The community aims to be a place that offers something for everyone; more of a town than conventional neighborhood development.

There are all types of housing from apartments, townhouses and larger single family homesPhoto courtesy of J. Ashley Photograph

In developing Serenbe, Steve and Garne hoped this would grow into a model for how future developers can build wellness neighborhoods in a biophilic model in other parts of the world. They now hold conferences such as Nygren Placemaking and The Biophilic Leadership Summit to educate the public on how they can change their building practices to build with the land and not against it.

Steve says, “While they value architecture, agriculture, arts and education, they highly value nature and their place within it, which no other community encompasses as fully as they do.” According to Steve, it is their vision to connect people to nature and each other by creating a place filled with fresh food, the arts, and acres of preserved natural lands. While providing much of the food production of the community, it also promotes environmental sustainability and a healthy lifestyle for the residents.

There are multiple farms and beautiful walking paths throughout the community.Photo courtesy of J. Ashley Photograph

Serenbe builds community by having residents farming together, creating social cultural opportunities and in many other small ways, such as providing central mail pick-up stations, so people have a place to meet and chat.

Founder Steve Nygren created this new kind of community development, a wellness community, where anyone can enjoy spending the day, come for a weekend or stay for a lifetime.

What Fees Do You Pay on a Home Equity Loan?
U.S. finishes swimming worlds with most medals in history
President Ford’s Vail Winter White House Hits The Market For $13 Million
Stock futures rise as Wall Street looks to snap losing streak
Who Is Carl Icahn? What Is the Icahn Lift Phenomenon?