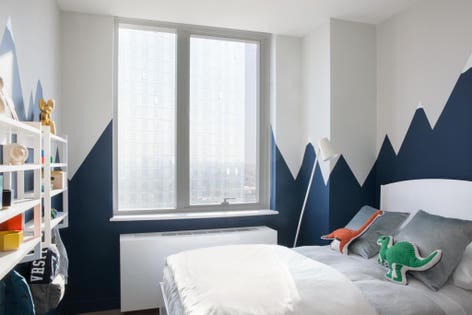 The Kin technology will first roll out in the Jackson Park rental complex in Long Island City.

Relief could be on the way for urban families struggling with the high cost of childcare.

Kin, a residential brand formed through a new partnership between real estate developer Tishman Speyer and the co-living company Common, will build complexes designed specifically to meet the needs of parents and their kids, with amenities like stroller parking areas and community spaces suited for children and their caregivers.

Individual units, meanwhile, will come already baby-proofed, and will have features including family-style kitchens and custom cleaning services.

Perhaps the most unique aspect, however, is an app to keep residents updated on events in their buildings, like story time and birthday parties. The brand will also team up with third-party childcare givers to provide on-demand service for residents. Users, in other words, will be able to swipe on their phones to request sitters and nannies, in advance or last-minute, and coordinate with other parents to share them.

The Kin app will keep parents updated on events in their building and allow them to schedule and share babysitters.

The concept is based on an epiphany from Brad Hargreaves, founder and CEO at Common, which has co-living spaces in 24 buildings around the United States, and his pal and fellow dad Robert Speyer, co-founder and CEO at Tishman Speyer, an international firm with $88 billion in real estate across 28 markets.

About a year ago, the pair were chatting over coffee and the topic of childcare came up, leading them to put their brains together and apply Hargreaves’ background in co-living to Speyer’s knowledge of residential development.

“Kin is designed to harness the power of the sharing economy to produce stronger communities, and more cost-effective and convenient childcare options,” Speyer explained.

Plans for ground-up Kin developments, to be built in and around cities across the United States, are slated to be announced later this year. In the meantime the app will launch in Jackson Park, Tishman Speyer’s new 1,800-unit rental development in Long Island City, Queens, in May.

A kitchen in Jackson Park.

While rentals in the complex are market rate, with studios starting at about $2,700, the savings in childcare through the platform could amount to $1,600 per month for full-time shared nannies, according to research from Kin.

The struggle for quality, but affordable, childcare is growing. Its cost, along with a desire for personal connections with other families, were among the top concerns found in a national survey conducted by the two firms. Additionally, less than 15% of respondents reported using grandparents or other relatives for primary childcare.

Hargreaves, who lives in the downtown Manhattan neighborhood of Chelsea, experienced the challenge first-hand when he and his wife had their first baby a few years ago. After deciding against daycare centers, the couple instead teamed up with parents from a block away to hire a nanny to watch all their children together.

“It was a really incredible experience,” Hargreaves said of the nanny-sharing arrangement. “It was good for the socialization of our child and it saved us a lot of money.”