Foot Locker’s strong earnings for the holiday season could have its stock sprinting back to its all-time highs, Piper Jaffray’s Craig Johnson says.

At $63.07 as of Friday’s close, shares of the athletic shoemaker are up nearly 38 percent in the last year, and almost 19 percent year to date. The stock hit a new 52-week high of $68 on Friday after spending most of 2018 trying to recover from its late-2017 low of $28.42. And they were aiming higher in Monday’s premarket. 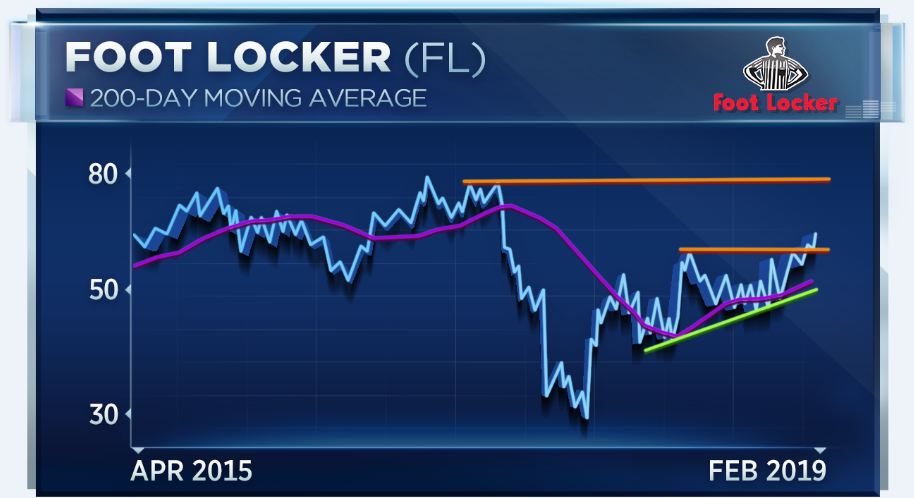 “If you look at the lows that were made in ’17 in this stock and then you look at the price action over the last nine months, you’ve been essentially consolidating,” Johnson said. “With [Friday’s] price action, we’ve now broken [the] top side of that consolidation range, and the size of that setup really suggests a measured objective really back to the old highs at about $78.”

Foot Locker last touched the $78 level in December 2016. Now, Johnson thinks a combination of under-the-radar catalysts can get it there again.

“You … can see that the valuation argument is kind of below the five-year average. You still have a lot of the analysts on the Street that are either neutral on the stock or underweight,” he said. “So we think it’s a good trade in here, and, again, I’ll call it a trade back to the old highs, about 24 percent higher. So we’d continue to be a buyer of the stock in here.”

“For the last two or three years, investors have been trying to put the death nail into retailers, and they continue to defy the odds,” he said on “Trading Nation.” “Foot Locker [is] clearly one of them.”