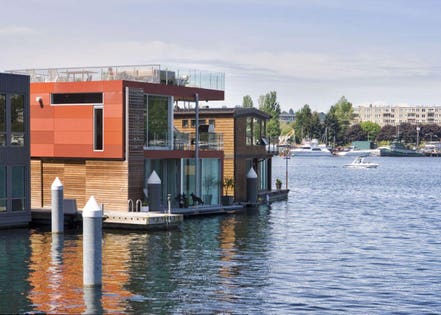 Sustainability was a major concern while building on the water. Exterior cladding of the house is fiber cement panels. The screen in the corner of the house is made of ipe wood and forms an enclosure for bicycle storage. A common dock is used to get from the floating home back to dry land. The house was designed by E. Cobb Architects.Photo courtesy of Steve Keating for Prefabulous Small Houses published by Taunton Press

When people decide to downsize, they often are looking for an alternative lifestyle. Some decide to relocate, many decide to move to a smaller house, and some decide to live on the water.

This offers lots of advantages particularly for downsizers – no landscaping, a simpler life, a built in community, proximity to nature and a tranquility that comes with living on the water. Downsizing from a larger home is the perfect time to get rid of clutter and move into the smaller home on the water with less “stuff.”

Those who chose this option will have lots of choices; motorized houseboats or yachts which can move from place to place, or moored floating homes. These are constructed on a floating foundation and are generally permanently moored.

The house was towed most of the 50 miles from the Port Townsend Boatyard where it was built to its new home base in Lake Union. Only for the last four miles was it pushed because the tugboat needed more control and maneuverability on narrow passages leading up to the lake. The entire operation took about 10 to12 hours.Photo courtesy of E. Cobb Architects

One such house I came upon was the Lake Union Floating Home designed by E. Cobb Architects. After sending their two children off to college the owners wanted to live smaller and spend more time on or near the water. The house took a year to build, begun in January 2013 and completed in January 2014. The entire house—from the flotation base to finishes and accessories—was built in the Port Townsend Boatyard. Once complete it was towed and moored to its permanent location on Lake Union where it was ready for occupation right after it was connected to sewer, electricity, and gas. All the necessary inspections and permits were also required before residency.

To moor the house, the couple purchased a slip in a 12-home floating community. With a limited number of floating home slips available in Seattle (approximately 500 total), and code stipulations preventing the creation of more, this type of water dwellings is unique, highly desired, and highly regulated.

A wall of glass fills the living room, dining room and kitchen with natural light. In the right corner and behind the sofa in the living room operable glass panels allow for cooling air circulation on hot days. A large overhang and heat lamp over the outdoor dining table make the deck usable on cool evenings – even during drizzly Seattle winters.Photo courtesy of Steve Keating for Prefabulous Small Houses by Taunton Press

One of the unique features of the house is the staircase, which provides beautiful views from every level. The two-story-high window south of the stair landing exposes a gigantic steel moorage pile and slivers of water and dock. The window at the mid-landing provides a glimpse of the neighbors’ dinghy and Lake Union. And from the top landing, there are views of a boat marina and a silhouette of the I-5 bridge.

The first floor bedroom offers beautiful lake views and lots of natural light from the wall of glass and clerestory windows. An aluminum grating boat moorage platform is right in front of the bedroom windows.Who wouldn’t want to wake up to this view.Photo courtesy of Steve Keating for Prefabulous Small Houses published by Taunton Press

Because of the small footprint, the house had to be designed to make full use of all the available space. Hallways are minimized and rooms were designed with lots of storage so additional furniture would not be necessary. An open floor plan and carefully placed windows help create the light and open feel the owners desired.

An aluminum chainmail curtain in the large kitchen window gives privacy without cutting off the light. The backsplash is marble and countertops are quartz.Photo courtesy of Steve Keating for Prefabulous Small Houses published by Taunton Press

The house has radiant floor heating and no mechanical cooling system. In the heat of summer, multiple large sliding doors on both levels of the north elevation provide and promote air movement off the lake, keeping the house comfortable.