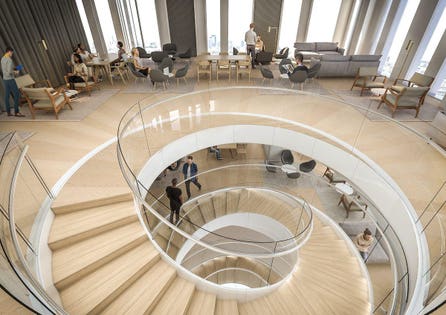 DeepMind is moving out of Google’s U.K. headquarters and into a large new London office.

The artificial intelligence lab, which was acquired by Google in 2014 for around £400 million, will move into a new building in King’s Cross at some point in 2020.

It will include a double helix staircase, a lecture theatre, a library, and a roof garden. It’s unclear who the architect will be. Wired UK reports the office will be 11 floors high, which is the same height as Google’s U.K. headquarters.

“I’m delighted to confirm DeepMind is developing a new building in the Kings Cross area,” said DeepMind CEO and cofounder Demis Hassabis in a statement.

“I want this building to help foster energy, contemplation and collaboration — ingredients required for pioneering scientific research. This plan has been in the works for many years now and it has been amazing to see the designs come to life.”

DeepMind currently occupies two floors in Google’s largest U.K. office, which is also in King’s Cross. Google moved into the building in 2016 as it stalled on building its own HQ, which is now underway.

Google says it will eventually employ around 7,000 people in King’s Cross, and it has quietly snapped up a number of other properties in the area.

DeepMind came under pressure to move to Silicon Valley around the time of the Google acquisition but the founders managed to convince Google that DeepMind would be better off in London, where it could access an untapped pool of talent from London, Oxford, and Cambridge, as well as the rest of Europe.

Hassabis and his cofounder Mustafa Suleyman, head of applied AI at DeepMind, are both born and bred in London.

DeepMind’s current headcount is unclear but it’s believed to be well over 700 people. The Economist reported in 2016 that the figure is likely to grow to 1,000 in the not so distant future.

King’s Cross has become one of London and the U.K.’s biggest tech hubs, with Facebook and Samsung both in the area. It has been nicknamed the “Knowledge Quarter” due to the fact that University College London (UCL), the Wellcome Trust, the British Library, and the Francis Crick Institute are also there.

Laura Citron, CEO of London & Partners, a promo agency for City Hall, told Wired: “DeepMind is a true London success story. This world-leading AI team has stuck closely and passionately to its London roots, understanding and utilising the talent, innovation, creative energy and knowledge that sits on its doorstep.”

Politics class: New bill of rights would allow UK courts to diverge from ECHR rulings
Falling House Prices And The Elections In 2022 And 2024
Home price increases slowed in April for the first time in months, S&P Case-Shiller says
Pfizer Stock: Plenty Left in the Vial Despite COVID-19 Waning
UK’s local builders disappearing in their thousands as costs soar