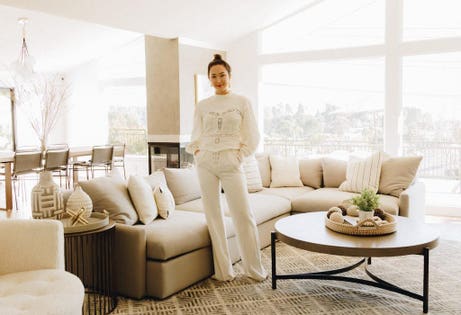 Chriselle Lim, who is the Korean-American founder of The Chriselle Factor is more than just a social media star or YouTuber. And perhaps the term “influencer” doesn’t cut it either. While she has over a million followers on Instagram (1.1 million to be exact), she has also excelled as an entrepreneur. Way past typical brand collaborations, she has an eponymous fashion line, which is sold at Bloomingdales and Nordstrom among other stores.

Many influencers, even some of the most popular ones, use their home as a backdrop for content creation. While this is a savvy idea to cut costs and save time, it can create stress for even the most balanced people. Luckily for Lim, she has an office to separate her work and home lives.

So, when Lim and her husband, Allen Chen purchased their current house in Palos Verdes, California over three years ago, she wanted it to look and feel like a family home as opposed to an Instagram post. But that doesn’t mean the aesthetics aren’t Insta-perfect anyway.

Lim in her living room.

When the couple moved into the home, it was shortly after the birth of Lim’s first daughter, Chloe. While the house featured sweeping ocean views, the real draw was proximity to Chen’s parents because even the biggest influencers appreciate free babysitting.

By the time Lim was pregnant with her second daughter Colette, the couple realized they were going to need an additional bedroom. They decided to move out for five months (and move in with family) to renovate. This was just four months before she was due to give birth.

However, the work needed to be done. Lim confesses “The bones of the house were a bit odd. The last time it was remodeled was [probably] the 70’s.” They opened up the kitchen and gutted all 3.5 bathrooms. The ground floor family room/playroom was turned into a grand master suite.

“I wanted a space I felt inspired by, just for myself,” she says. Because her profession requires her to be creative, Lim needed her home to be a place where she felt “calm, at ease and inspired.”

However, it wasn’t at all a priority for her to build anything for the sake of content creation. “If it happened to have Instagram photo moments, that’s great. But, I didn’t really design the space so it would be perfect for Instagram.”

The fact that Lim is more of a fashion influencer than a decor influencer also took some pressure off. “I have a beautiful office and I don’t focus so much on home. When it comes to my Instagram moments, I’ll add it in here and there, but [my home] is kind of my sacred space. I don’t want to feel like I always have to bring my work home.”

Collaborating With The Right People

Clean lines in the kitchen.

Lim hired her friend, Erick Garcia of Maison Trouvaille, who also designed her office to work with her on this project as well. She revealed that she didn’t use an interior designer for her first home and she felt it ultimately ended up unfinished. This was a pain point she didn’t want to experience again.

Lim says that having a designer isn’t just about presenting different options and finishes. Having another person to organize the logistics of the project such as deliveries, unboxing, returns, etc, makes life much easier. With a schedule like Lims, she needed all the help she could get.

Lim worked with Garcia to create a minimalistic aesthetic featuring clean, modern lines. Many of the large pieces were customized from designer Jonathan Louis. “He had a lot of pieces that just worked well with our home.”

“We mixed in high and low,” she added. Some of the furniture was purchased from Restoration Hardware as well as West Elm.

Lim suggests that even if you hire a designer, it’s important to be “super hands-on for choosing finishes, marble, etc. If you’re hands-off and they start to build, it’s kind of too late at that point.” So, communication is key.

Lim also stresses that designers can’t make every single decision. “You still have to do the work and be there,” she explained.

Another mistake Lim made was not having the house checked for issues prior to beginning construction. An inspector discovered an issue with termites after they had already moved back in. Unfortunately, the family had to leave again so the home could be exterminated.

“Make sure the bare bones are healthy before the exterior is pretty,” she stresses. Lesson learned.

Focus on recession: next week is all about this level for gold price – analysts
PREPA’s unsecured creditors, union, retirees want to bring their case to Swain
Hot, Hot, Hot! Mortgage Purchase Applications UP 6% WoW, Refi Applications DOWN -3.1% WoW As Fed Keeps Massive Covid Stimulus In Place (AEI Home Price Index UP 17% YoY In May)
Home price increases slowed in April for the first time in months, S&P Case-Shiller says
Pfizer Stock: Plenty Left in the Vial Despite COVID-19 Waning