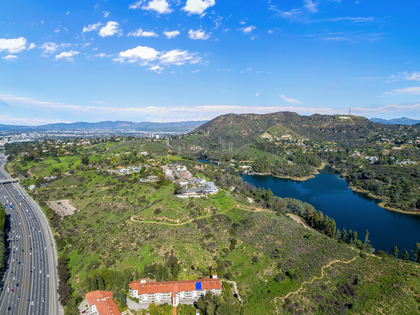 In the shadow of the iconic Hollywood sign, a new 18.2-acre parcel of undeveloped land hits the market for $30 million. Or in Hollywood movie lingo—it costs as much as Iron Man Robert Downey Jr.’s salary (points aside) for the upcoming film, Avengers: Endgame. His wealthy industrialist Tony Stark character would cherish the locale of this private lair.

With future permits, the parcel is a unique investment opportunity for a developer, builder or investor to transform the land into commercial space, multi-family complexes or some spectacular marvel perched high above US-101 and the picturesque landscape (like Griffith Park Observatory).

One could even imagine a foundation headquarters here—similar to The Getty Museum or billionaire investor Nicolas Berggruen’s future philanthropic headquarters (designed by Herzog & de Meuron) in the Santa Monica Mountains. It’s not clear whether the late first lady envisioned another Betty Ford Center, her acclaimed Rancho Mirage-based addiction and substance abuse treatment facility (now part of Hazelden Betty Ford Foundation), in these Hollywood Hills. However, a new Betty Ford outpatient center was opened in Santa Monica in 2015.

“While there isn’t any concrete evidence of Betty Ford having plans to build a center on this land, it is a solid assumption as the site has beautiful views and an overall peaceful, serene feel,” says Walters.

The hillside parcel is expected to sell to a developer who will likely build residential condos and/or commercial properties.Jun Tang

Who wouldn’t want to live, work, perform or relax in a heavenly Hollywood scene like this, especially in overcrowded Los Angeles? The blissful hillside campus is primed for residential and commercial development despite its steep, undulating terrain.

“We ultimately envision a project that would create more housing, such as a combination of apartments and condominiums, which is so desperately needed for our growing city,” says Walters. “One could build a gated community with a condominium or apartment building on the lower section of the property, and reserve the upper nine acres as untouched, open air space.”

The pristine 18-acres frames the halcyon Hollywood Reservoir, shimmering atop Cahuenga Pass—a low mountain pass through the eastern end of the Santa Monica Mountains (the Hollywood Hills area), connecting the Los Angeles basin to the San Fernando Valley. Known as Lake Hollywood, the reservoir area is a popular destination for hikers, tourists and amateur photographers anxious for a tranquil stroll or the best glimpse of the Hollywood sign.

“This type of development could result in public benefits, including expansion of the one-lane Cahuenga Boulevard,” says Muradian. “A traffic study, completed by Crain and Associates (approved by the department of transportation), proves that by expanding Cahuenga Boulevard the flow of traffic would be less congested on the 101 Freeway.”

This is a far cry from the original Hollywood housing concept. Boasting 45-foot-tall capital letters, the Hollywood sign was initially a 1923 advertisement for a housing development on the less expensive side of the Santa Monica mountains—called “Hollywoodland” (coined by real estate developers Woodruff & Shoults).

Reverse view of the reservoir and downtown L.A. from the Hollywood sign, atop of Mount Lee in Griffith Park. (AaronP/Bauer-Griffin/GC Images)Getty

Those promises have been delivered beyond any doubt—as Hollywood icons are among the privileged few who could afford this extraordinary property. So much for less expensive side of the Hollywood Hills.

Here’s why this housing downturn is nothing like the last one
The 2 Most Common Airdrop Phishing Attacks and How Web3 Wallet Owners Can Stay Protected
Nike Stock: Inflation Shouldn’t Stop You from Buying
How blockchain can open up energy markets: EU DLT expert explains
Top Privacy Cryptocurrencies by Market Cap Lost Half Their Value in Less Than 2 Months