It’s the triumph of indexing: Fund managers continue to trail their benchmarks.

Active managers who claim that they would do better during periods of heightened volatility are going to have to find another argument.

This week, S&P Dow Jones Indices released its annual report on how actively managed funds performed against their benchmarks. The conclusion is that active managers continue to show dismal performance against their passive benchmarks. For the ninth consecutive year, the majority (64.49 percent) of large-cap funds lagged the S&P 500 last year.

“The figures highlight that heightened market volatility does not necessarily result in better relative performance for active investing,” the report said.

“What’s different about 2018 was the fourth quarter volatility,” Aye M. Soe, a managing director at S&P and one of the authors of the report, told CNBC. “Active managers claimed that they would outperform during volatility, and it didn’t happen.”

The study will bolster the claims of many financial advisors, who say that investing in low-cost, passive funds remains the soundest long-term investment.

This is not a one-year phenomenon. S&P has been doing this study for 16 years, and the long-term results only strengthen the claims for index investing. Indeed, while a fund manager may outperform for a year or two, the outperformance does not persist. After 10 years, 85 percent of large cap funds underperformed the S&P 500, and after 15 years, nearly 92 percent are trailing the index.

Long-term, the numbers were not much better in other categories like small-cap stocks or fixed income: “Over long-term horizons, 80 percent or more of active managers across all categories underperformed their respective benchmarks,” the report concluded.

Looking at managers’ overall record last year versus the broader S&P 1500 Composite, 2018 was the fourth-worst year for stock managers since 2001. 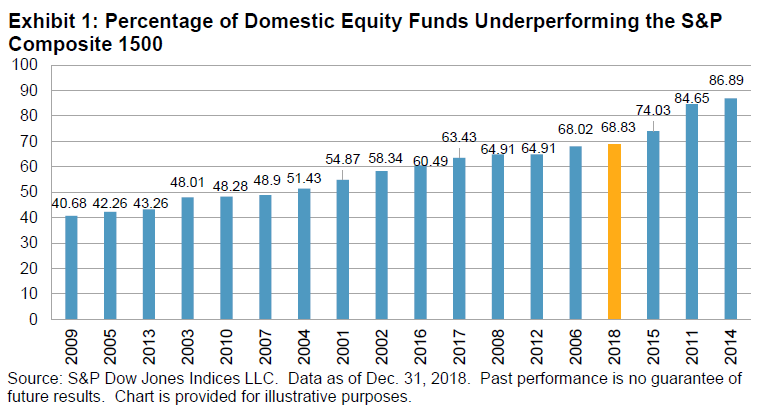 Critically, the study adjusts for “survivorship bias.” Many funds are liquidated because of poor performance, so the survivors give the appearance the overall group is doing better than it really is.

“The disappearance of funds remains meaningful,” the report notes. Over 15 years, 57 percent of domestic equity funds and 52 percent of all fixed income funds were merged or liquidated.