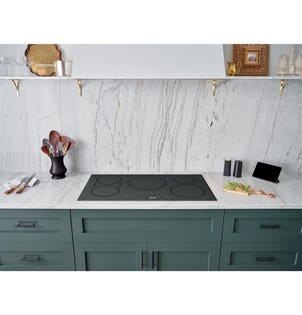 This Cafe Integrated cooktop from GE Appliances has app-based technology that will provide guided cooking and temperature control. The stove comes with a smart stainless steel skillet that communicates with the app and the burner.   This product will be available for order in October.Photo courtesy of GE Appliances

With only an electric stove option at my current residence, I decided to purchase an induction stove, rather than use the outdated electric one that existed there previously.  After years of cooking on a gas stove, I was wary of how this induction stove would cook; I thought I would miss the flame, and the cooking process I was so accustomed to. But after cooking on an induction stove for just a few weeks, it will forever be my cooking appliance of choice.

Many people are still not familiar with this relatively new technology. Although I’ve been writing about induction stoves for years I had never experienced cooking on one myself, until now.

First introduced at the Worlds Fair in Chicago in 1933, induction cooking now has about 8% of the market share for cooktops and ranges.

This induction range by Wolf has the controls on the cooktop and the knobs are the controls for the oven.Photo courtesy of Sub-Zero Group, Inc.

According to Consumer Reports, “No other cooking technology that we’ve tested is faster than the fastest induction elements—we’re talking 2 to 4 minutes speedier than the competition to bring 6 quarts of water to a near-boil.”

An electromagnetic field below the glass top surface, transfers current directly to magnetic cookware, causing it to heat up. Induction stoves and cook-tops look like regular electric ranges, but when they heat up, they do not display the glow that these other ranges do. When an induction-compatible pan is placed on the cooktop, currents are transferred to the pan and instant heat is generated. The cooktop doesn’t heat up, the cookware does. And as soon as the pot is removed  the heating stops; the induction stove-top will not heat up unless there is a magnetic pot on it.

A major difference between induction and other types of cook-tops is the speed with which  induction cooks. For a first time user, they may very well burn the first food they begin to cook. There is a power mode that will heat up a small amount of food in seconds and will boil water in a few minutes. There are various levels of heat, that can be used to heat food quickly or much slower at the lowest levels.

In addition to the speed of cooking induction ranges also save energy by automatically shutting off when a pot is removed from the range. This is also a safety feature, because there is no chance of  leaving the stove on when cooking is finished.

Induction stoves are very easy to clean. Unlike gas stoves with grills and crevices, the top of an induction cooktop is flat with minimal detail to clean. Grease and spills can easily be wiped off and cleaned with a special cream, specially designed for glass top appliances. It is easy to keep an induction stove looking like new.

A minor disadvantage is the requirement to use magnetic pots for induction stoves. However, many kitchens are already equipped with pots that are magnetic; these pots can also be used with any other types of stoves.

In the past, induction ranges have been more expensive than other cooktops. Recently, however, there are more modestly priced units, making them more affordable and comparable to the price of may other stove tops.

One of the newest technologies to be coming out in appliances, including stoves, is connectivity, whereby the appliance can be programed and controlled.  According to the Association of Home Appliance Manufacturers (AHAM),   connectivity “will allow consumers to save additional time, conserve energy, integrate the use of renewable energy and pave the way for faster and more accurate repairs.” AHAM predicts “Connected devices will be in nearly every home by 2020, when the total number of those devices is expected to reach 26 billion.” The GE Appliance Café™ cooktop shown above can be automatically adjusted to the pan temperature as the home chef proceeds through a video-guided recipe.

Another new technology which will be introduced by Wolf in 2019 is the Cook Anywhere induction cooktop. A pan can be placed anywhere on the cooktop surface and the technology will automatically detect the pan’s footprint, heating only the area making contact. The cooktop will be able to heat up to six pots and pans simultaneously in any position, allowing additional cooking flexibility so the user is not constrained to specific cooking zones.