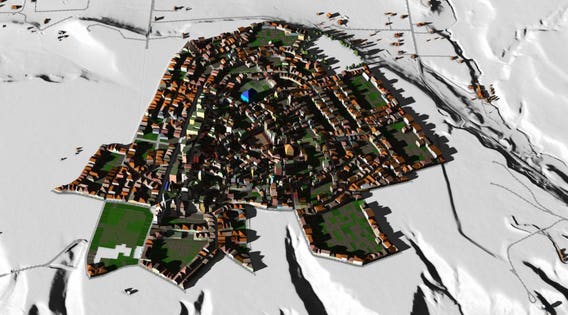 Wealth guru Pete Adeney has teamed up with a Netherlands-based urban design consultancy to float the idea of a planned community in Colorado that would be car-free and bicycle-friendly. Situated between Longmont and Boulder, the new community – provisionally known as Cyclocroft – would be built in a one-square-mile plot, and become home to 50,000 people.

“In very rare instances, developers have done planned communities, but they still stuck to the conventional Cars Allowed Everywhere model, which keeps the costs high,” said Adeney, who blogs as “Mr. Money Mustache.”

He enthused: “It’s not until you get bold enough to take away these security blankets and really get people to commit to a new idea – including parking lots only at the edge of the one-mile city – that you will see a significantly different place spring up.”

Adeney, a Canadian, is working on the concept with Amsterdam-based B4place, a property development agency run by Americans Tara Ross and John Giusto.

“Pete wrote a blog post a couple of years ago where he said that he wanted to build a super-compact place in North America with cycling and pedestrians ruling the roost, like in the Netherlands,” said Ross.

“We saw this, and dropped him a note introducing ourselves, and letting him know that we had come to Europe from the U.S. ten years ago, and that we share his vision.”

The Mr. Money Mustache blog has 300,000 regular readers, advising how they can retire when young and yet still live comfortably. Adeney retired in 2005 at the age of 30 having saved enough cash from a generous wage to cover annual spending for the rest of his life. His tips on frugal living – that’s zestful and healthy with it – include reducing car use, and getting on a bicycle instead. Unusual for North America, normal for The Netherlands.

“The best strategy would be to buy a chunk of land in advance that is outside of any existing city with its antique car based building/zoning rules,” envisaged Adeney.

“Then just start designing and building, selling things to residents as you progressed, to fund more buildings. We could also sell land plots to agreeable developers, and even accept investment from funds that shared the same mission.”

He recognizes many will think this is pie-in-the-sky – folks will label it as a “high-tech hippie commune,” he jokes – but he reckons Cyclocroft has a better chance of creating truly sustainable living compared to the Google-funded “smart city” project planned for Toronto’s Quayside.

Google’s Sidewalk Labs are working in a city “already destroyed by cars,” claimed Adeney, and “with sky-high property prices, they aren’t creating any magic.”

He added: “I am surprised that existing billlionaire-backed ventures are not [already] tinkering with [developments like Cyclocroft].”

A Dutch-style town in Colorado would be very different to previous car-centric planned communities, agrees a promotional post on the B4Place website.  People would need to “give up huge yards, fast roads, and seas of parking lots, because they know that these become unsustainable maintenance and public safety liabilities.”

Those attracted to a community like Cyclocroft won’t “see living closely together as a compromise, but rather an opportunity to regain once-cherished benefits, including incidental socialization and collaboration.”

Using traditional Dutch easement and platting standards as a model, the community would feature parks, small public squares, and definitely no malls. Sprawl would be forbidden. Cyclocroft would be a people-sized city, with short distances baked in. Shops would be built close to homes, similar to the zoning rules that enforce retail proximity in The Netherlands.

Streets would be lit by dark-sky compliant lighting. There would be a pump track, a BMX track, and a skate park for kids (and the young at heart).

“We think that there’s a palpable and growing hunger for cohesive, ultra-compact, durable places like Cyclocroft,” said Ross.

“But the precedent for something like this in North America is virtually non-existent. NIMBYs, codes, standards, and the entrenched are effectively unchallenged and lawyered up. The average person has understandably become pretty cynical about any development, because the vast bulk of it is disposable wasteland in the making, no matter how posh it may have started out.”

Cyclocroft wouldn’t be just clean and green, it would also be dense. This will appeal to Millennials, believes Ross because, unlike their parents and grandparents, they crave “incidental serendipity, neighborliness, and culture.”

And, even if Cyclocroft never gets platted for real, it’s a sign of the eco-friendly urban developments to come, believes Ross.

“Institutional and value-based investors have become weary of quickly depreciating sprawl as their only choice. The money and attention recently seem to be focusing on rescaling expectations – with co-working, co-living, micro-apartments, single-room occupancy, and scooter share as some of the main solutions proposed for our financial- and resource-constrained era.”

The Predictive Powers of the Bond Yield Curve
Crypto risks ‘elevated,’ Bitcoin’s next price support is below $14k, Ethereum’s is below $500 – Fairlead Strategies
Macron Tells Biden to Rethink Energy Plans
Citi calls out potential risks of crypto-backed mortgages and benefits of metaverse property
Bausch Health Stock: Why There are Better Opportunities Elsewhere