The stock market is euphoric over the idea that a trade deal between the U.S. and China will fix the economy and boost earnings.

However, the bond market is a different story. There, investors still perceive uncertainty, and even a possible recession lurking.

“One of these markets is going to be wrong, and it’s hard to know this time around which one it’s going to be,” said Art Hogan, chief market strategist at National Securities. “The bond market is betting we are not going to see stabilization of growth, and that the China trade war drags on.”

Buyers have been jumping into both markets, and the broader stock market is now up 18 percent from the low it plunged to on Dec. 24. The S&P 500 Index has bounced back to 2,775, about 5 percent below its all-time high.

But when you look at the bond market, Treasury yields remain surprisingly low, reflecting fears about a weakening economy and lingering uncertainty. The 10-year Treasury yield, which moves opposite prices, has not even retested its Christmas Eve high of 2.82 percent, and on Friday languished around 2.66 percent.

Trade talks between the U.S. and China appear to be making some progress and are scheduled to continue in the coming week. That has helped lift stocks, with the S&P 500 up 2.5 percent and the Dow gaining 3 percent in the past week.

The Federal Reserve’s about-face on policy in January has also helped lift stocks and keep bond yields low. After its Jan. 30 meeting, the central bank indicated it is not in a hurry to raise interest rates, and that it could slow down the process to reduce its balance sheet.

For their part, stock investors love low interest rates and an easy Fed. Lower rates also means bond yields do not need to move higher, particularly in an economy that is growing slower with no inflation pressures.

Important for investors is that when these two markets trade in the same direction, there ultimately is a breakout and one dictates direction.

“I think there’s a couple of things in the bond market that don’t connect to reality the way the equity market sees it,” said Hogan.

In his view, the stock market is moving higher based on three assumptions: An end to the U.S.-China trade fight, an accomodative Fed, and continued economic stability in both the U.S. and China. 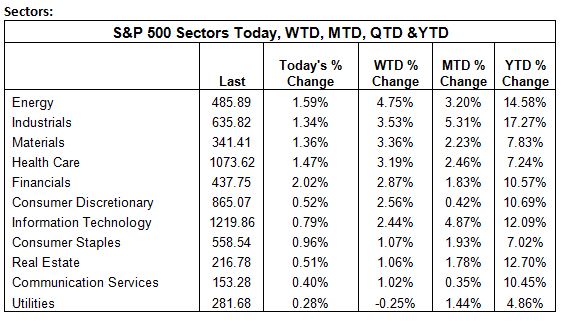 Vinay Pande, head of trading strategies at UBS Global Wealth Management, said that the bond market is not trading as if it were reflecting the same growth expectations of the stock market. “Most economists think the economy is slowing, but we don’t know how much it’s slowing. That’s a bit of an issue for the Fed, and that’s why they’re going to be on hold.”

He explained that currently, bonds look as if they see growth a full percentage point below what economists have forecast. The median fourth quarter GDP growth forecast is 2.4 percent, while first quarter is 2 percent, according to CNBC/Moody’s Analytics Rapid Update.

“Is the bond market expressing the longer term consensus? No, it’s not,” said Pande. “The bond market is really trading like it’s a reinsurance market,” where reinsurers will raise prices with each successive event: If there were hurricanes five years in a row, they would still charge as though another hurricane was expected in the sixth year.

That is how the bond market is now responding to weak data — as if it is forecasting an economic storm, or even recession that may not come.

“There’s a muscle memory to this,” Pande added.

Many U.S. economic reports were delayed by the 35-day government shutdown, but what has been available has been painting a mixed picture.

For instance, monthly employment reports have been very strong, with wages gaining and job creation averaging more than 240,000 over the past three months. Still, a slight rise in weekly unemployment claims over the past three weeks has been raising yellow flags, since those data can sometimes serve as an early warning for the labor market.

Yet the biggest worry so far was the stunning 1.7 percent drop in December retail sales data, released by the government last week. Economists slashed fourth quarter growth estimates to closer to 2 percent, as a result, but many believe the data was suspect or could be revised higher. Yet, the weak data reminded investors that markets had been gripped by recession fears as stocks skidded in December.

Some economists blamed the retail sales slump on that violent stock market sell off in December, and January retail data is still not available.

“All our reports earlier were that holiday sales were sparkling,” said Chris Rupkey, chief financial economist at MUFG Union Bank. “The Wall Street reaction has hit Main Street with full force. This is not just a pot hole, it is a major roadblock on the way forward. it really makes us question the outlook this year.”

The consumer is the biggest driver of the U.S. economy, so economists were encouraged when Friday’s report of University of Michigan consumer sentiment showed a recovery during February, after the government shutdown ended. Some economists also expect to see a rebound in retail sales in the next release.

“The ball is in the Trump administration’s court to make sure those trade talks with China remain on track, otherwise the stock market and consumer confidence could suffer another dip,” noted Rupkey. He said the consumer’s better expectations for the future could help support the stock market, and bring the economy out of its soft patch.

Separately, corporate profits have grown at a more than 16 percent pace in the fourth quarter, but companies have been warning of softer revenues or higher costs, and analysts have been revising first quarter estimates lower.

Although stocks have rallied even in the face of an earnings slowdown, that could be tested as early as April. Earnings are now expected to be a decline in first quarter, for the first time in three years.

Yet the performance of stock sectors that do well in an economic growth rebound have in fact been outperforming, even if their future earnings forecasts have been revised lower. For instance, semiconductors, in the Philadelphia Semiconductor Index, are up 17 percent since the start of the year, and several high profile names in the sector warned about future earnings.

The S&P industrial sector, the ultimate economic cyclical group sensitive to China trade, is also up 17 percent in the same period.The Shanghai stock market has also been surging, even as bond yields around the world remain low.

Boris Johnson to resign as prime minister as government crumbles
Goldman Sachs: 2 High-Yield Dividend Stocks Worth Investing In Now
9 Tips for Growing a Successful Business
Stocks making the biggest moves premarket: Kohl’s, Micron, Apple and more
If We Keep Escalating This Conflict, The End Result Will Be A Nuclear Cataclysm