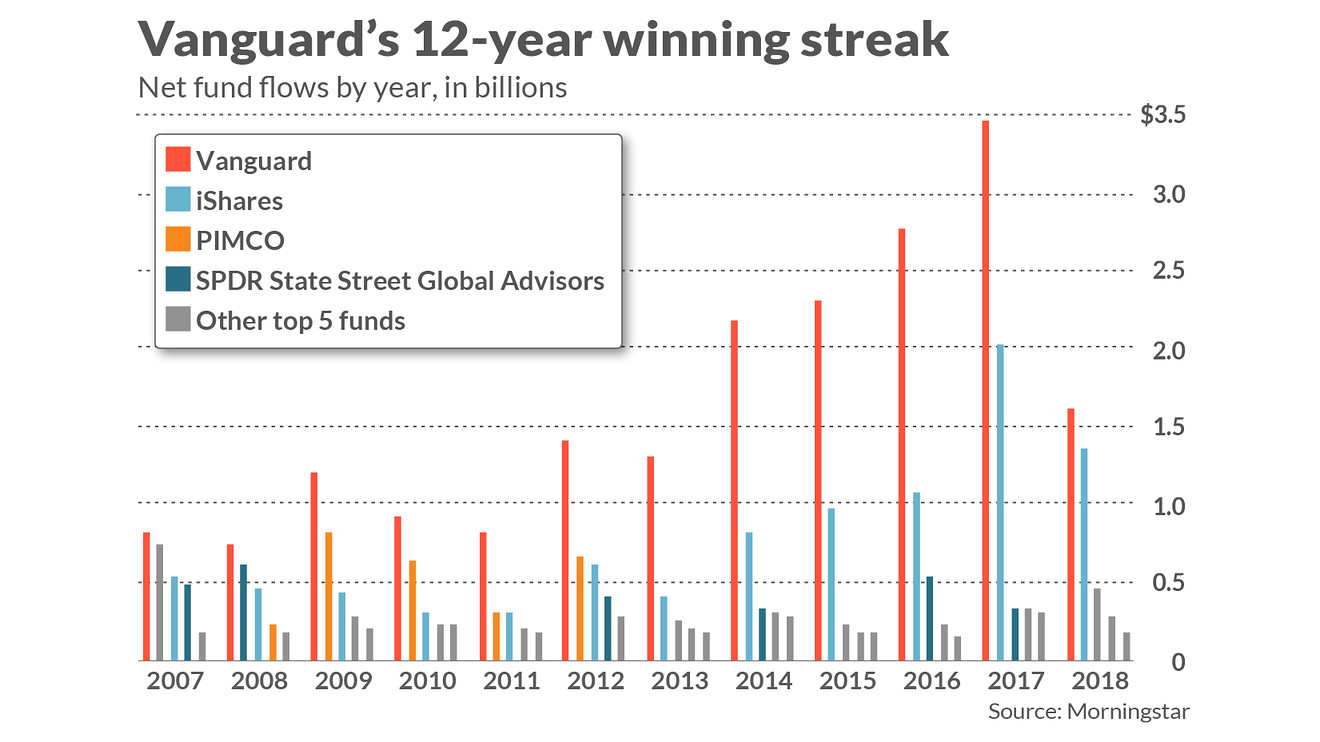 Economist Burton Malkeil has called the index fund “the most important financial innovation that has been created for the individual investor.” And one look at index-fund pioneer Vanguard’s performance over the past decade shows that many individual investors agree.

For the past 12 years, Vanguard has taken in more money on a net basis than any other fund firm, according to data from Morningstar. Only one other firm, BlackRock

subsidiary iShares, has appeared on the list of top five net-flow recipients every year since 2007, and at nearly $2 trillion in net inflows since that time, Vanguard has attracted more than double the dollar amount iShares has over the past 12 years.

Ben Carlson, director of institutional asset management at Ritholtz Wealth Management labeled Vanguard “the Amazon of wealth management,” when learning of the magnitude of Vanguard’s lead over the competition, saying in an interview with MarketWatch that the comparison is appropriate not only because both companies were leading innovators in their respective industries, but because they have used their scale to drive prices lower and build unprecedented brand loyalty.

Vanguard, and specifically John Bogle, was a pioneer of so-called passive investing strategies, marketing the first-ever index mutual fund in 1975, which sought to track the performance of benchmarks like the S&P 500

rather than actively picking stocks in an attempt to outperform an index. Because the fund wasn’t actively managed, Vanguard was able to offer funds at rock-bottom prices, compared with other mutual-fund firms, which typically employ teams of analysts and star stock pickers to identify investments.

Todd Rosenbluth, senior director for ETF and mutual fund research at CFRA, told MarketWatch that the popularity of such index funds has grown steadily since that time, with the trend toward low-fee index investing intensifying over the past decade.

“Vanguard has been at the sweet spot of two trends that have dominated the wealth management space,” he said. “We have seen a significant shift toward index investing over the past 10 years, and within the active management world, there has been a shift toward low-fee active investing,” said Rosenbluth. “Because of its culture of low-cost investing, and its mutual ownership structure, Vanguard has been in the position to reap the rewards of those who want low-fee active management as well.”

Vanguard is a client-owned company, wherein the shareholders own the funds offered by Vanguard, which in turn own the company itself.

These days, however, it isn’t always a complement to refer to a company as the Amazon of their industry, given the growing concerns in some quarters over Amazon’s dominance in e-commerce. Even Bogle, Vanguard’s founder, began to wonder if Vanguard and the index-fund revolution has become “too successful for its own good.”

In a November editorial in the Wall Street Journal, Bogle pointed out that index mutual funds have growth from holding 4.5% of the total U.S. stock market in 2002 to 17% in 2018. “If historical trends continue, a handful of giant institutional investors will one day hold voting control of virtually every large U.S. corporation,” he wrote. “Public policy cannot ignore this growing dominance, and consider its impact on the financial markets, corporate governance, and regulation. These will be major issues in the coming era.”

Some critics have gone so far as to say passive investing is harming capitalism, because passive investors don’t engage in analysis of securities that help lead to their being priced accurately. Rosenbluth says such fears are overblown because “most trading activity in stocks are bonds are still happening at the active, individual level.”

On top of that, a Feb. 18 op-ed in the New York Times argued that passive investing funds may be vulnerable to manipulation and conflicts of interest. “Conflicts of interest should worry anyone who is invested in index funds, which includes many Americans with retirement accounts. Index providers have enormous power. The decision to include a company in the S.&P. 500, for example, results in a reallocation of billions of dollars of investors’ money. The average company added to the S.&P. 500 gains value; when it’s removed, its share price drops as index funds sell their holdings,” wrote authors of the article Robert J. Jackson Jr. and Steven Davidoff Solomon.

CFRA’s Rosenbluth makes the case that passive funds are abundantly transparent and perhaps even more than individual stocks.

As for Vanguard’s success, the research director says the growing popularity of the type of passive investing the company has pioneered, will require on leading passive firms take responsibility for their outsize role in corporate governance decisions. “As a there becomes a greater concentration of stock ownership among a few firms,” he said, “they need to make sure that shareholders know why they’ve made the decisions they have.”