The miner’s shares surged on Tuesday in its fifth one-day rally of more than 5 percent since the beginning of the year.

Ari Wald, head of technical analysis at Oppenheimer, says he doesn’t see a strong fundamental picture but the technicals support another rally from here.

“It doesn’t fit any of our top-down themes and it doesn’t necessarily scream well from a bottom-up basis either, but we can tell you we wouldn’t bet against it. It is a trading stock. It looks like it’s going to work higher,” Wald said on CNBC’s “Trading Nation” on Tuesday.

Wald says a former level of resistance at around $12.50 should offer its stock a base. It would need to drop 5 percent from Tuesday’s close to reach that level. As long as it can stay above that line, Wald sees further gains.

“I think upside to $15 resistance, that’s really the next upside test,” said Wald. 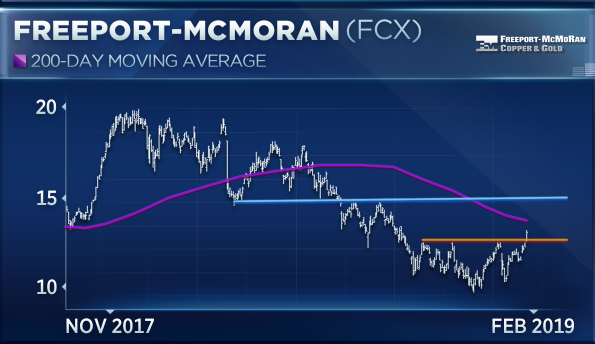 The stock still has another 15 percent upside until it reaches $15. It has not traded above that level since August.

“The fundamental story actually supports [more upside],” Sanchez said on “Trading Nation” on Tuesday. “Internally, they have cleaned up their ownership issues with Indonesian mines, they’ve set themselves up for sale, so they’re ripe for a takeover.”

Freeport and Rio Tinto sold their majority stake in the copper mine Grasberg to the Indonesia’s state-owned mining company Inalum last year. The site is the second-largest copper mine in the world.

“Externally we’re seeing copper prices rising because of supply shortages and we also see support for gold. Both of those things actually benefit Freeport-McMoRan so externally and internally it’s a good story,” added Sanchez.

Bear Markets And Your 401(k)
Houses Are Still Selling Like Hotcakes In These 10 Cities In 2022
8 Best Funds for Regular Dividend Income
4 Key Factors to Building A Profitable Portfolio
Stocks making the biggest moves midday: Micron, Kohl’s, Meta Platforms and more