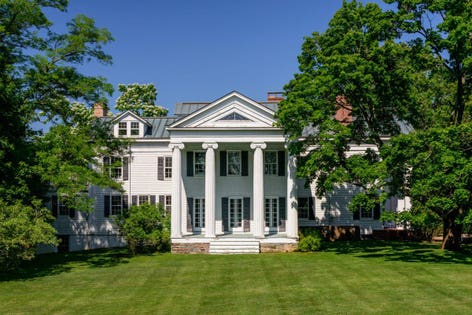 The famed model sold the historic mansion for more than $17 million.Out East

It only took nearly a decade, but Christie Brinkley has sold her historic Sag Harbor mansion.

And though the price tag was lowered $8 million over the years, it still reportedly sold for more than $17 million, so it’s safe to assume the famous model won’t be going broke over the deal.

Christie Brinkley first listed the property for just $7 million in 2004, before taking it off the market for renovations.Getty

Originally built in 1843, the 5,500-square-foot Hamptons home, located at 1 Fahys Road, boasts five bedrooms - one of which is nestled on the third floor next to a study and storage nook. The first floor features multiple dining areas, a massive soapstone and marble kitchen, and a mudroom for shedding those pesky wet bikinis over the summer.

On the second floor are the four remaining bedrooms. Three have en-suite baths, including the master suite which also has its own sitting room and a private terrace.

It is decorated throughout with nineteenth-century details, including wide-plank pine floors, an oak banister and several fireplaces.Out East

It is decorated throughout with nineteenth-century details, including wide-plank pine floors, an oak banister and several fireplaces. Outside, the grounds offer an in-ground gunite swimming pool.

The 1970s Sports Illustrated cover girl originally listed the 4.4-acre estate in 2004 for $7 million, then thought better of it and upped the price to $15.75 million in 2010, according to the listings site Out East.

With more than 300 feet of private beach and views of the harbor’s yachts and sunsets visible from nearly every room, it must have seemed like an easy sale. However, when no buyers were biting, Brinkley took it off the market and added some touch-ups to the exterior.

The exterior features more than 300 feet of private beach and a swimming pool.Out East

Upon completing its makeover, she relisted the house in 2016 for $25 million, and then reduced the price to $20 million.

Meanwhile, presumably to increase her chances of making some money off her real estate, Brinkley also listed her $29.5 million estate on Brick Kiln Road in Bridgehampton, known as Tower Hill, to see which of the two properties would sell first.

That compound spans 20 acres, with a four-bed, five-bath main house, which sits of 475 tons of locally-mined rock, along with a four-bed, 2 ½-bath guest house. It also hearkens to Hamptons history, as it was first designed in 1891 by Dr. John Gardiner, of the family that founded Gardiner’s Island in East Hampton.

The houses include features like a 50-foot observation tower, a greenhouse, a barn that functions as an artist studio and a heated four-car garage. Now that the Sag Harbor home has finally sold, we’re guessing Brinkley will just have to rough it over there.

“Play to Earn” to Own Remitano Network’s RENEC Token
Biden’s about-turn on Saudi war in Yemen
Alarm! Fed’s Bullard Says US Recession Fears Overblown With Consumers Healthy (My Response In One Chart: REAL Average Wage Growth At -3.34% YoY, Real GDP Growth At … 0%)
What Is the Glass-Steagall Act?
The Contest for Spirit Airlines Continues