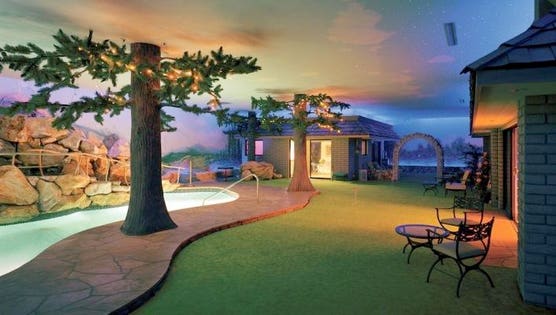 The famous Las Vegas Underground House has been making news for years as one of the most bizarre properties in the world. Located 2 miles east of the center of the Las Vegas Strip, this outrageous 14,620 sq ft concrete & steel doomsday bunker was created to survive a nuclear war. The bomb shelter home includes a yard with pool, spa, trees, guest house, BBQ & fountain and is surrounded by 500 feet of floor to ceiling Murals of city & mountain views with lighting that simulates day, dusk & dawn.

The house near Flamingo Road was recently listed by Stephan M-LaForge at Berkshire Hathaway for $18 million, and judging by the photos seems to be stuck in time from the 1970s. Bizarre furnishings and decorations fill the home with a country cabin meets suburban housemaker vibe. Although the pink kitchen trim, pink toilets, green fake grass carpets could hardly be considered traditional.

The home was once owned by the Society of the Preservation of Near Extinct Species that provided tours to the public but it was foreclosed years ago. Collectors from the 70s will appreciate the built-in appliances including a wall toaster as well as the quirky features like a boulder encased BBQ.

The five bedroom, six bathroom home is built underneath a regular two-story townhouse and is part of a 15,200-square-foot basement that also features its own casita. The bombproof escape house is created to keep the owners entertained once they are cut off from mankind.  There is a putting green, a swimming pool, two jacuzzis, a sauna, a nightclub with bar and dance floor as well as an “outdoor” area complete with huge murals of the countryside and forest settings.

Filled with fake trees, fake flowers, two elevators, security system, and an intercom system the home includes a lighting system that makes the home duplicate the real outdoors including mimicking Sunset, Daytime, and Dusk. There are even lights and stars built into the sky blue ceiling with clouds.

Camouflaged by rocks, an entrance complete with an elevator takes you deep into the underground home with an additional staircase hidden in a backyard shed. While not truly built to withstand a nuclear blast, the property is 26 feet below the surface and could be remodeled and converted to become an authentic nuclear shelter.

According to the listing, the home has repeaters that allow cellphone reception, cable, and internet below ground. The eight air-conditioning units were also replaced and they added a 1,000-gallon water tank, among other infrastructure upgrades.

The home was built in the 1970s by entrepreneur Girard B. “Jerry” Henderson who made his fortune from several companies, including Avon cosmetics and Gulfstream Aerospace Corp. He had a particular fear that the Cold War would end the country. Henderson formed a company called “Underground World Homes” and created an exhibit at the 1964 New York World’s Fair called “Why Live Underground” to highlight the futuristic concept of living underground. He lived in his underground house until his death in 1983. His widow no longer wanted to live underground so she built the above ground townhouse where she lived until she died in 1989.

Townhouse on the surface over the bunker houseBerkshire Hathaway

Aerial view of property in Las Vegas near the stripBerkshire Hathaway