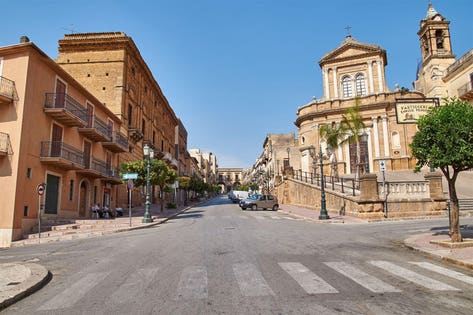 A couple dozen Moorish style properties with stunning views over the Mediterranean sea, in an Italian hilltop town called Sambuca near the western tip of the Italian island of Sicily are being sold for less than a cappuccino.

Sambuca’s officials want to revive a town that like so many others across Europe has seen its population dwindle in recent years as residents move to bigger cities in search of economic opportunities.

The town is offering houses for a symbolic €1, or just under $2.

“Ever dreamed of living in an idyllic Italian village?” asks the daily Il Globo. “The tiny town of Sambuca has relaxed several official rules and formalities for buying property to make it as easy as possible for people to purchase them and move in.”

Most of the houses located in the historic center are two-floor, measuring between 40 and 150 square meters, built of reddish-pink stone and featuring arcade entrances, courtyards, gardens with palms and orange and mandarin tress. Some have terraces with views. On a clear day, Mount Elba, 200 kilometers in the distance, can actually be seen.

The local officials made their decision last year and insist that anyone interested can buy any of the houses for a song: “As opposed to other towns that have merely done this for propaganda, this city hall owns all €1 houses on sale,” said Deputy Mayor Giuseppe Cacioppo. “We’re not intermediaries between old and new owners. If you want a house, you’ll get it right away.”

“The initiative was launched by the municipal administration of Sambuca di Sicilia, in the province of Agrigento, which in 2016 won the title of the most beautiful village in Italy,” writes the Giornale Di Sicilia.

The ”casa a €1″ model has already been successfully tested in other Sicilian municipalities.

“It’s a way,” according to the official statement, “to combine the recovery of urban and architectural heritage with the revival of tourism in a municipality that also is starting to register good investments  in the field of incoming hotels like Airbnb.”

Too good to be true? Well, here’s the catch:

The potential owners of the houses, some of which are very old and in bad shape, must agree to renovate their property within three years, with a committed investment of at least €15,000, plus a €5,000 security deposit that will be returned once the remodeling is complete.

Sambuca, according to deputy mayor Cacioppo, has been known as the “city of splendor” and as an “earthly paradise,” thanks to its fertile land located inside a natural reserve.

“Packed with history, gorgeous beaches, woods and mountains surrounding us, Sambuca is silent and peaceful, an idyllic retreat for a detox stay.”

To balance the dwindling population, the town needs foreigners that can appreciate its advantages to save it from going under. “During the last five years Sambuca has already seen the purchase of several houses in the historic center by Italian and foreign citizens, including French, Swiss, Lithuanian, German, English and Hungarian,” a statement by the city council said.

Originally the name of the town that was founded around 830 by the Arabs who once ruled over the island, was  Sambuca Zabut  According to Wikipedia, it was changed in 1928 by Benito Mussolini who removed ‘Zabut’ and added “of Sicily.”

Citi calls out potential risks of crypto-backed mortgages and benefits of metaverse property
Kinross expects to declare initial mineral resources for its Great Bear gold project in 2022
Behold, Beneath A Santa Ynez Valley Estate Lies The King Of Wine Kivas
Barclays to buy UK specialist lender Kensington Mortgages
Crypto-Stock Trifecta: One of these Isn’t Like the Others