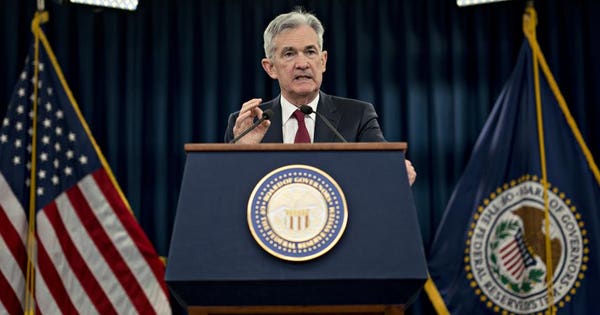 The U.S. Federal Reserve (Fed) will maintain the target range for the federal funds rate at 2.25% to 2.50% at its upcoming meeting at the end of this month, and hold off for several more meetings until mid-summer – at the earliest – before initiating a further hike. Both the vast swathe of analysts canvassed and market pricing indicates no change this January.

Andreas Johnson, U.S. economist at SEB, the leading Nordic corporate bank, commenting on the upcoming Federal Reserve (Fed) meeting and interest rate decision that concludes on 30 January 2019 in a preview, indicated that he still expected the Fed to “hold its target rang” for the federal funds rate at 2.25%-2.50% until June 2019, when the rate will be upped to 2.75%. At that point economic weakness will “push the Fed to the side lines.”

The comments from SEB Fed Watcher Johnson come in the wake of last month’s FOMC meeting on December 19 at which the fed funds rate was raised by 0.25% against a backdrop of jittery stock markets, slowing Chinese activity, trade war concerns and intense pressure from President Trump via social media (twitter) not hike – directed towards Fed chair Jerome Powell and the committee.

For sure all the indications surrounding the actual Fed rate decision later this month underline that there is little uncertainty about the decision.

According to the CME FedWatch Tool, which provides the latest probabilities of rate moves by the Federal Open Market Committee (FOMC), currently shows that the probability of “no change” in rates in less than a week’s time stands at 99.5% versus 0.50% for a hike to a range of 250 to 275 basis points (bps) – or, 2.5% to 2.75%.

And, a Bloomberg survey of analysts at the time of writing showed that the vast majority – 60 out of 62 – have forecast that the Fed will leave its target range unchanged. Market pricing also indicated unchanged rates.

SEB stated in a note titled “In wait-and-see mode” that it is likely “too early to remove interest rate forward guidance” at the forthcoming  meeting, but that they expected the Fed to make the wording of the statement “slightly more dovish.”

This is in line with recent communications from the central bank, which SEB said clearly indicates “a pause from the rate hikes”, meaning a hike at the January meeting was highly unlikely.

“No revised forecasts will be presented at this month’s meeting and as no policy change is expected, the market focus lies entirely on any changes to the wording of the statement,” Johnson stated.

He added: “Both the U.S. dollar and equities have become more sensitive to the monetary policy outlook. If the forward guidance is removed, there would likely be a drop in yields, a slight weakening of the U.S. dollar, and rising equity prices.”

A slightly more dovish statement, SEB’s main scenario, would probably have “little impact” on financial markets according to the bank.

SEB expects the Fed to remain on hold with interest rates until the June 2019 meeting, when they foresee a hike to 2.75%. It is pointed out that their revised forecast is less aggressive than the Fed’s own rate path, but more aggressive than the current market pricing.

“This pause would give the U.S. central bank time to assess the economic development, as well as the Brexit process and the partial U.S. government shutdown,” Johnson remarked.

Lael Brainard, a U.S. Federal Reserve Governor, in a speech early last December at the Peterson Institute for International Economics in Washington, D.C., in which she stated: “In Europe, there are risks associated with deliberations over Italy’s fiscal and debt trajectory and the United Kingdom’s deliberations on the Brexit deal.”

The Fed’s last meeting of 2018 in December was not particularly well received by financial markets and the central bank has since adjusted its communication in a decidedly more dovish direction.

In 2019, the Fed has spoken much about “flexibility”, “patience”, “data dependency”, “meeting-by-meeting approach” as well as “wait-and-see”.

Evolution and projections for the U.S. Fed funds rate and dot plot over the period from August 2018 to February 2021. (Source: SEB, U.S. Federal Reserve data).SEB.

The U.S. central bank is obviously not in a rush to hike. Furthermore, the Fed expects core PCE inflation, the preferred inflation metric, to remain stable at slightly below the 2% in 2019. Modest inflationary pressure means that there is “no immediate need to deliver another hike,” Johnson posited.

That said, incoming economic activity data supports some additional tightening. For example, the December labor market report was especially strong. And, the print for fourth quarter GDP growth is expected in the 2.5%-3.0% range. This is slower than the third quarter, yet still well above estimates of potential growth.

With SEB expecting the Fed to remain on hold until the June meeting, when they anticipated a rise to 2.75%, this pause would allow the Fed time to assess the economic development, the Brexit process and the partial U.S. government shutdown.

In December, the forward guidance formulation, which has been used since the June 2018 meeting was modified by stating that the Committee “judges” rather than “expects” “some further gradual increases.”

Given that the Fed’s dialogue has turned more dovish, the next logical step at this point according to SEB would be to “further modify the forward guidance or remove it altogether.”

Removing the guidance does though have some support among FOMC members. Esther L. George, President of the Federal Reserve Bank of Kansas City, for example, argued in a speech on January 15 that “providing such explicit guidance now…would not be appropriate.”

“However, it is probably too early to remove the forward guidance at the January meeting as the Fed’s own median forecast still indicates two rate hikes in 2019 and one hike in 2020,” stated Johnson.

Assuming that the rate hike cycle comes to an end with the Fed funds upper bound at 2.75%, SEB expected the U.S. 10-year  treasury yield to trade 0.25 bps below the Fed funds at year-end 2019 and the curve to enter into a long-term steepening trend.

The Nordic bank has reiterated their recommendation for a “strategic steepener” by paying U.S. 3 year (3Y)/10 year versus 3Y/2Y, targeting the U.S. 2Y/10Y curve steepening to 80-100 bps, corresponding to a net profit target of at least 50 bps after the forward cost.

It further pointed out that the recent softer Fed communication has “substantially decreased” the risk of a curve inversion and thus rendered the strategic steepener “more attractive.”

Additionally, it is not actually clear what happens when the shutdown eventually ends and it could take a few months before the release calendar returns to normal. But, if anything, the lack of data should support an unchanged policy, even if the Fed has argued that it can adequately assess the economic development.