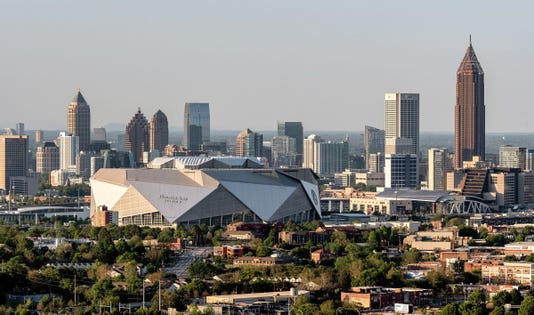 Final preparations for Super Bowl LIII are wrapping up in and around Mercedes-Benz Stadium in Atlanta, home for the Atlanta Falcons.Gene Phillips

As the New England Patriots and Los Angeles Rams prepare to face off Feb. 3 in Atlanta for Super Bowl LIII, short-term rental hosts in the metro area are gearing up for a surge of visitors from all over the world.

With many Atlanta hotels booked solid, Airbnb hosts here plan to welcome an estimated 9,200 guests from 59 countries and 49 states.

Apparently, a lot of local residents know a good opportunity when they see it. Twenty-three percent of the Atlanta hosts will be hosting on the Airbnb platform for the first time. The typical host stands to earn about $690 from Jan. 27 to Feb. 3.

Home sharing provides a way for residents to turn what is usually their greatest expense, their home, into a reliable source of income to help pay for things like their own housing, groceries or their children’s education.

Real estate investor Rich Munroe of Buford, Georgia, is no stranger to Airbnb. He owns seven properties and also manages five properties in Midtown Atlanta, where he plans to hosts guests.

“I also do rehabbing of properties, fix and flip,” he said. “I use the short-term rental business of Airbnb as a residual income to help with my future retirement.”

The average price per room per night of a booked Airbnb in Atlanta will be about $170 over the Super Bowl weekend compared with the typical average price of about $80, a reflection of supply versus demand.

Now that the opposing teams have been determined and visitors to Atlanta are making lodging arrangements, Munroe said, “I think everybody is coming to terms with lowering their Airbnb prices essentially down to something that is more realistic.”

Indeed, the matchup between the Patriots and Rams has been met with a shrug by many football fans because the Patriots win frequently, and the Rams lack a huge fan base willing to travel long distances to support their team. It remains to be seen whether the Rams’ Super Bowl bandwagon gains momentum in the days ahead.

“The one-bedrooms are going to be two or three times the regular rate, which is going to be around $200 or $300 a night,” said Munroe, adding that a four-bedroom house that typically would fetch $300 a night most likely will be more than $1,500 a night for Super Bowl weekend.

“There are fewer properties available that sleep more than four people, and so as a result of that, pricing on those is going to be a little bit higher,” he explained.

From recommending cheap eats to chic shops, Airbnb hosts can provide guests with an opportunity to immerse themselves in local cultures. Visitors can see what Atlanta has to offer and explore neighborhoods outside of the traditional hotel district.

Since its launch in 2008, Airbnb has welcomed visitors to big events around the world, including the Olympics, music festivals and trade shows, and smaller events like graduations and college basketball tournaments.

More than 40 percent of Airbnb guest spending is done in the neighborhood in which a guest stays, the company says, driving up visitor spending in neighborhoods that don’t traditionally benefit from tourism.

For example, in August 2017, travelers from around the world flocked to cities within the 70 mile-wide path of totality of the solar eclipse, extending from Oregon to South Carolina. Many of the cities and towns that were in the direct path of totality are rural communities with few hotels or other traditional hospitality options.

Airbnb hosts who were in the path of the celestial event earned a total of about $11 million in supplemental income.

Home price increases slowed in April for the first time in months, S&P Case-Shiller says
How tea plantations are testing private equity
Inside Atlantic Union’s decision to sell its profitable RIA unit
How Safe Is Venmo and What Are Its Fees?
SEC Chair Gensler Affirms Bitcoin Is a Commodity — ‘That’s the Only One I’m Going to Say’