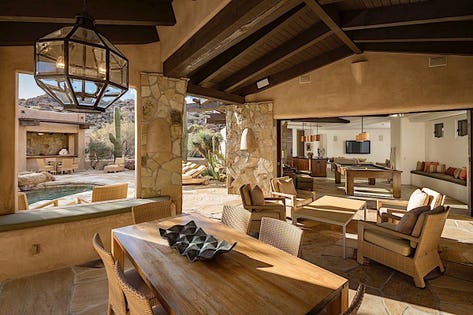 “This term ‘play the market’. That verb is very dangerous,” says Peter Lynch, in his Forbes interview as one of the 100 Greatest Living Business Minds. He is speaking of stocks, naturally, as former portfolio manager of Fidelity Magellan Fund, but he could just as easily be discussing his latest real estate move that will keep him ahead of the curve. Last fall he announced he would put his 14,000 square foot Scottsdale home up for auction without reserve via Concierge Auctions and now he has revealed that two million dollars worth of the furniture will also be included in the sale.

The home had previously listed for $9.5 million and was scheduled for auction last month, but it has been pushed back to be included with all the other homes in their January event. Bidding opens on January 29th and will end at a live auction at a Scottsdale resort called The Phoenician on January 31st. The buyer will also have the option to purchase three adjacent lots for an additional price. Registration is via the home’s auction info page.

The long list of furniture and accessories that are included is extensive (far too lengthy to include here) but is more than enough for a new buyer to be able to move in the same day they sign on the dotted line. It includes high-end items such as the piano and piano bench, numerous solid wood end tables and credenzas, all the electronics and television screens, kitchen supplies right down to the silverware and all the outdoor furniture in the photo above. This is in addition to the usual furniture of beds, couches and chairs seen in the photos. Even the fully furnished pool house will come with its contents ready for a new owner.

Most of the items in the living room are included in the sale.Concierge Auctions

As he mentioned in his video interview, to ‘play’ the market is a dangerous path. Ever the strategist, it’s a wise move on Lynch’s part to include nearly all the contents of the house since the stakes keep getting higher in the world of real estate auctions. Long ago they were considered the last hope for a dilapidated home that hadn’t found a buyer on the open market, but things started to change when luxury owners began to get involved. Now that it has become much more common for high-enders to use auctions as a way to sell their properties quickly they have to find ways to make the sales stand out from the crowd. Sometimes it is including almost all the furniture in the sale, or listing four of your houses for auction in one week, or maybe hiring someone to incorporate art into the property. Either way, it is starting to take more than just listing a house to get the attention of high-end buyers.

Here’s a few more photos of the inside of the house, which comes on a 3.6 acre lot with a total of eight bedrooms and 11 bathrooms. The kitchen has an island with second sink and additional outlets.

This photo of one the bedrooms gives an idea of the views.

The bathroom has a fireplace near the bath and a desk area.

Here’s a shot of the backyard with the pool and the drought-tolerant landscaping that was part of the design.

For more photos and all the auction information, head to the main page here.