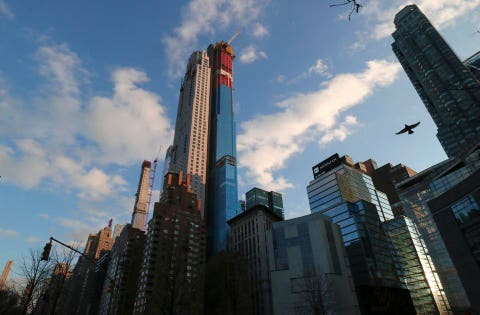 A Manhattan penthouse is now the most expensive home ever sold in the United States. Hedge fund billionaire Ken Griffin closed on an apartment in under-construction 220 Central Park South this week for around $238 million. A spokeswoman for Griffin confirmed the sale, which was originally reported by the Wall Street Journal. The deed is not yet available in city property records.

The figure destroys the previous New York City record of $100.47 million set in 2014; Computer billionaire Michael Dell was recently exposed as the owner of that penthouse in nearby One57. The prior national record was also set that same year when Barry Rosenstein, another hedge fund billionaire, purchased an East Hampton spread for $147 million.  Since then, nine-figure sales have been largely concentrated in and around Los Angeles.

However, Griffin, with a net worth of $9.9 billion, is no stranger to massive real estate purchases. Just this week it came out that he spent $122 million on a London home close to Buckingham palace. That was the highest price paid in the British capital since 2011. The New York apartment is around 24,000 square feet and is being delivered empty, according to the Journal.

Griffin heads Citadel, a Chicago-based hedge fund that he founded in 1990 not long after graduating from Harvard. His New York purchase comes as the $30 billion fund is expanding its presence in the city. Its new offices are just across Central Park from Griffin’s new home.

The 79-story tower at 220 Central Park South is being built by Vornado Realty Trust. It was designed by architect Robert A.M. Stern to mimic classic prewar designs. Building began amid a condo construction boom in 2014 but is opening into a much softer luxury real estate environment.

Check back for more.

What Is Your Plan To Make It Through The Worst Global Food Crisis In Any Of Our Lifetimes?
European stocks add to gains after steep global declines
Macron appeals for compromise to break political deadlock
Demand for adjustable-rate mortgages surges, as interest rates make biggest jump in 13 years
The 6 Phases of Foreclosure