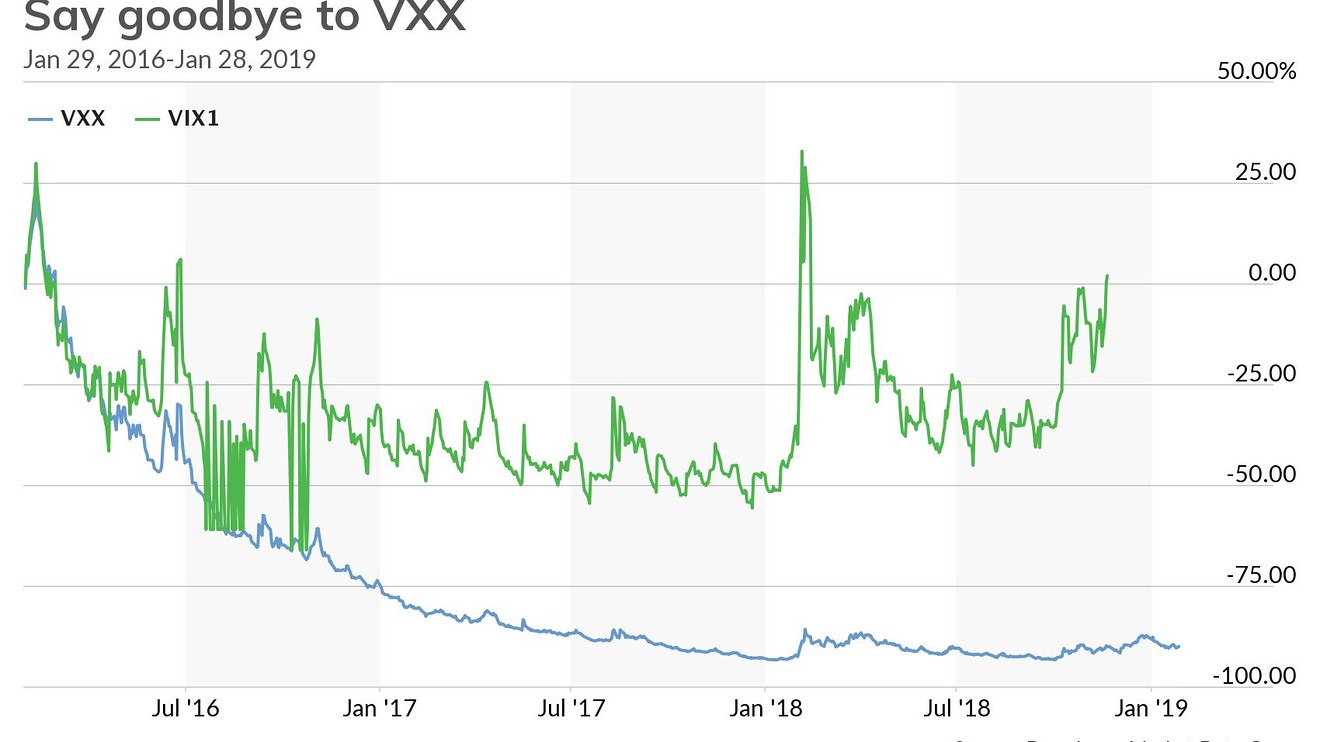 A popular instrument used to manage exposure to volatility is going away as investors face a number of potentially market-rattling uncertainties, even if a late-2018 rout for stocks has given way to a state of more recent calm.

is scheduled to mature Wednesday. The Barclays-sponsored product made its debut amid the 2008-2009 financial crisis with a stated maturity of 10 years.

The volatility instrument, and other ETNs, or exchange-traded notes, may strike some investors as a strange beast. Unlike exchange-traded funds, or ETFs, which are baskets of thematically similar stocks or other assets, ETNs are bonds.

Indeed, VXX Is essentially a bank-issued note backed by Barclays that carries a fixed maturity. The British bank has launched an identical product, VXXB

which is intended to succeed VXX but would mature in 30 years.

Todd Rosenbluth, senior director for ETF and mutual fund research at CFRA, has been watching VXX’s maturation date creep closer. “This is a high profile note retirement but it can serve as a reminder to investors that ETNs are different animals than ETFs,” he told MarketWatch.

VXX was designed to offer short-term exposure to stock-market volatility, and references the Cboe Volatility Index, commonly known as the VIX

an index that’s also often referred to as Wall Street’s “fear gauge.” The VIX reflects trade in options on the S&P 500

providing a measure of expected, or implied, volatility over the next 30 days. It is currently trading around its historical average at 19.5.

Because the VIX tends to rise as stocks fall, the index is often used as a measure of how much investors will pay to purchase insurance against potential stock-market drops. The VIX peaked at 80.86 back in November of 2008, but reached an all-time low of 9.14 in November of 2017, as a streak of preternatural complacency in the market coincided with a number of repeated records for equity indexes.

The VIX was created in 1993, spawning a host of products tied to the gauge, including VXX. It jumped to a recent high of 50.30 back in February before receding, and then bounced back to 36.07 during the worst trading for stocks on the session before Christmas on record. The index has since fallen by nearly 50%.

The current transition to the VXXB from its predecessor, however, may be worth watching for whether investors smoothly transition from out of the defunct VIX product.

Even though the VXX’s maturation date has been known since its inception, traders don’t seem to be in a rush to switch over to VXXB just yet. VXX most recently boasted some $470 million in assets, according to FactSet data. It reached a peak in assets on Feb. 6, 2018, of about $2.29 billion. Meanwhile, VXXB had assets of $369 million as of Jan. 28, FactSet data showed.

“There are likely, and perhaps unfortunately, retail investors that don’t watch this as closely as they should and will find out they don’t own something any more because it retired,” Rosenbluth said.

Investors holding VXX when it expires will simply see their positions liquidated into cash. Meanwhile, Barclays’ competitor Credit Suisse has announced that it is cutting the fees on its own volatility ETN, the VelocityShares VIX Short Term ETN

in attempt to attract some of the funds amid the VXX transition.

As Rosenbluth quipped: “Depending on how the market moves once the product retires, being in cash could be a good thing or a bad thing.”

In fact, Stephen Aniston, a financial adviser who provides analytics about volatility and tweets under the handle “Stevie Vixx,” expects many investors to shift into new products only after VXX’s expiration.

“I think basically people will just move to it the day after VXX closes,” Aniston said. “For people using VXX before, they will transition to [VXXB]. I don’t see people moving to other products.”

Still, market ructions last year are a reminder that playing with volatility can burn even experienced investors.

Last February, as trade-war fears ignited, the VIX surged to nearly 40. Traders who had steadily — and profitably — bet against volatility’s return were caught off-guard. A separate Credit Suisse product, the VelocityShares Daily Inverse VIX Short-Term exchange-traded note, lost nearly all its value, and was subsequently retired by the bank.

As Rosenbluth put it, “There’s volatility in hedging volatility.” But he stressed that it was market choppiness that did in those products, and not the other way around. “The tail doesn’t wag the dog,” he said.