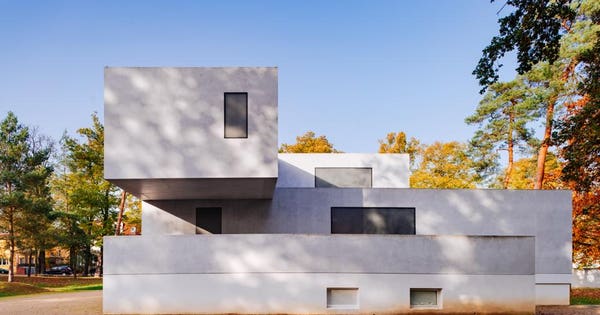 At the Bauhaus, the art and architecture school founded by Walter Gropius, the simplified, low-slung forms of modernism took root. In Dessau, Germany, the site will be 100 years old in 2019.Getty

It depends on whom you ask. Millennials or Generation Z members emphatically state their preferences for Atomic Ranches, kidney-shaped swimming pools, interiors a la The Jetsons, and all things Palm Springs. Baby boomers, many of who actually remember those kidney shapes, sunburst clocks and split-level ranches, know it as a design movement that encompassed a number of styles.

Often, the term “Mid-Century Modern” refers to the postwar era, ca. 1945 to 1965, but architectural historians who write about modernism often move the time frame back to include the 1920s and 30s, and many make a direct connection to work by Frank Lloyd Wright and Charles Rennie Macintosh. No matter how you define its parameters, however, Wright and Macintosh had something in common with American Modern styles: a dislike of overt historicism and ornamentation. You might say that the 20thcentury was one long reaction to the historic revival styles of the 19thcentury, and to their lavishly decorated interiors.

What we call “Modern” architecture began with Walter Gropius, Ludwig Mies van der Rohe and Marcel Breuer, who fled Nazi Germany. Gropius and Breuer then taught at the Harvard Graduate School of Design, while Mies, who led the department of architecture at the Illinois Institute of Technology, later founded the Second School of Chicago.

Modernism claimed that less is more, that form should follow function and that ornamentation is a superfluous add-on. In residential architecture, the forms are low and the distinction between inside and outside is blurred with the use of large expanses of plate glass. Built-ins help assure that the interiors are uncluttered. A simplified hearth is the focal point in an open plan.

It was supposed to be healthy: the inside-outside quality of the houses was to inspire its residents to get out into the fresh air and to exercise. Because this was also the era when television entered almost every American home, that’s not exactly what happened.

The reason Mid-Century Modern architecture made such an impact is because so many new houses were built during the post-war building boom, and the newly streamlined style lent itself to the mass production of housing. In California, the boom started earlier: starting in the 1920s, the state was a hotbed for mid-century residential design. Important names include Joseph Eichler, a philosophical developer who brought modernism to family homes in the San Francisco Bay Area and Los Angeles. Architect Richard Neutra (a protégée of Frank Lloyd Wright) designed striking residences for the southern California landscape. One builder alone put up more than 2,500 Mid-Century Modern houses in Palm Springs.

The all-American ranch house is one of the forms taken by Mid-Century Modern architecture. The California Ranch was developed by Cliff May as early as 1932; the postwar ranch, the split-level and the A-frame are later variations. Many ranches embodied 1950s modernism, but others were “traditional.” The term Atomic Ranch is used for somewhat streamlined, space-age ranches with futuristic references and an embrace of new materials like plywood and laminates.

What we respond to today is the optimism that was expressed with Mid-Century Modern architecture. These houses were designed and built at a time when Americans believed that technology would make our lives better. Innocent days, indeed.

Boris Johnson insists he will not undergo ‘psychological transformation’
Citi must pay $1.4M to financial advisor who called it a ‘boys club’
3 Possible Solutions To Housing Booms And Busts
SPACs wipe out half of their value as investors lose appetite for risky growth stocks
Home Prices Finally Cooling Off? Market Slows In April But Demand Remains High Despite Rising Mortgage Rates