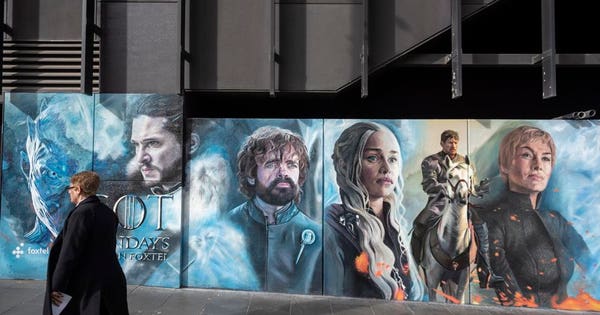 A pedestrian in the city center of Melbourne, Australia, walks past a colorful advertisement for the Game of Thrones series. The ad shows the characters played by the actors Kit Harington, Peter Dinklage, Emilia Clarke, Nikolaj Coster-Waldau, and Lena Headey. Photo Credit: GettyGetty Images

It couldn’t feel more like winter in Chicago, especially with tomorrow’s opening of a brand-new Game of Thrones pop up bar at Replay Lincoln Park. In honor of the show’s final season, the popular arcade bar will be transformed into Westeros, so brace yourself for an experience unlike any other. “Our ultimate goal for the pop-ups is to create and curate immersive installation experiences for the local Chicago community,” Raquel Hung, one of the artists behind the concept, told Forbes. “We love the idea that a space can attract so many different people to come together and collectively enjoy and connect with the environment that we’ve created. With this pop up in particular, we were really trying to transform the space so people will feel like they’ve stumbled upon a fantastical world where they can escape the cold, hang out with a life size dragon, and grab a couple drinks.”

The creators behind the project are known as the Pop Up Squad and they themselves are huge fans of the show, which made for a seamless and elevated production process. “One big inspiration was the iconic map of Westeros, because we see it in every episode during the title sequence,” artist Tom Molloy shared. “Every area of the bar is different, you can visit a Dothraki camp, Meereen, High Garden, Braavos, Kings Landing, Winter Fell, and even the Wall at Castle Black.”

If you’re already planning a visit, make sure you consider Replay’s VIP package, which will be their first for all their pop up events. For the affordable price of $20, it will include a pint of beer in a keepsake goblet, a pin or print and more importantly express entry along with the opportunity to head to the front of the line at any photo opp location throughout the bar. There will be plenty of art to see and things to Instagram, so being able to skip the line will certainly come in handy. “One of my favorite things about the pop ups that often goes unreported is the amazing fan art that is created by the team of artists,” Molloy pointed out. ”Each artist individually creates pieces of fan art that are available to be purchased. This is where every pop up artist is able to express their individual talents for the bar goers to see.”

To get a better understanding of what to expect at tomorrow afternoon’s 3 PM opening, Forbes has the exclusive first look through a series of never-before-seen photos of the space. Check it out below and be one of the first to witness Chicago’s very own version of Westeros.

What one of the fiery drinks is like at the Game of Thrones pop up bar in Chicago.Courtesy of Replay Lincoln Park

A major art installation at the Game of Thrones pop up bar in Chicago created for fans.Courtesy of Replay Lincoln Park