After the market’s December meltdown, earnings season could turn up some winners among the rubble, analysts said.

What fourth quarter results will do for the market’s rebound from December’s trough is tough to say, given other factors, like trade talks, Washington dysfunction and the UK’s upcoming Brexit vote. But analysts do see some potential for positive reactions in individual stocks, even with the diminished expectations for 2019 earnings.

Fourth quarter reporting season kicks off this week with major banks Citigroup on Monday, J. P. Morgan on Tuesday and Bank of America and Goldman Sachs on Wednesday. There are a few important data releases, like PPI Tuesday and industrial production Friday, but reports on retail sales and housing starts have been delayed because of the three-week-old government shutdown.

Analysts expect earnings to be fairly strong, but are watching to see what companies say about the current quarter and the rest of the year, given expectations for a slower growing economy and lower profit growth.

After a 10 percent rebound off the Christmas Eve low, the S&P 500 is bumping up against a major area of resistance at 2,600 as earnings season begins. The S&P 500 was trading slightly lower at around 2,590 on Friday afternoon.

“In our view the bulk of the decline is clearly behind us,” said Julian Emanuel, chief equity and derivatives strategist at BTIG. Earnings could boost the overall market, but there are also geopolitical and other factors that could affect stocks. “It wouldn’t be a shock give the stiff resistance around 2,600 that it could pull back a ways.”

The market is expected to remain volatile, and could be choppy during earnings season because its surge higher was so sharp and swift.

“We thought earnings season would still be a net beat but with more mixed results,” said Keith Parker, chief equity strategist at UBS. “The key will be about 2019 guidance and what we’ve seen thus far is revisions to 2019 a bit more than the post-crisis average…The big bar reset typically happens during the first quarter, during fourth quarter reporting. We already saw expectations drop down a lot.”

Analysts expect that most of the bad news is out on earnings, but if the results and comments are worse than expected, the market could easily retest its lows. On the other hand, if earnings are better than expected, they could act as a positive force to help fend off further declines, strategists said.

“Our view is we’ll probably have more mixed results and guidance going into the quarter, but it does raise the likelihood of relief rallies, given where positions and expectations are,” Parker said. He said health care could be a positive.

“Health care has positive revision trends. We think they have a better earnings, sales backdrop,” he said,, noting that in consumer discretionary, lodging and restaurants stand out.

BTIG’s Emanuel said the market may be ready to reward positive news, and the biggest winners could be those that beat expectations for revenue and profit. Emanuel said in the last two earnings seasons, many companies that beat were hardly rewarded while those that missed on both profit and revenue fell an average 3.2 percent in the July period and 5 percent in October’s reporting season. 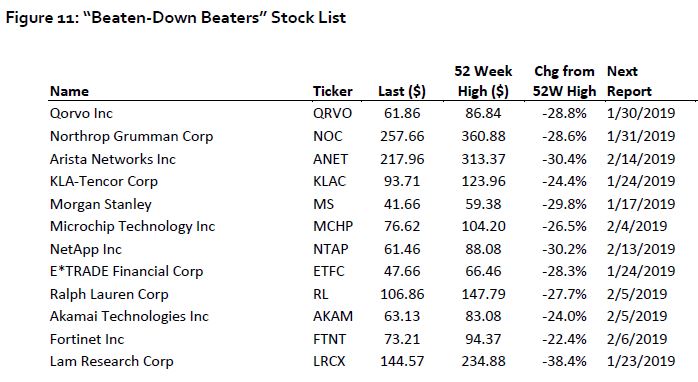 In order to find possible earnings winners, BTIG analysts screened for companies that were down 20 percent from their 52-week highs, but in the past two years had beaten on earnings and revenue and their stocks were rewarded.

BTIG said vulnerable names could be those that haven’t declined that much but that have missed on earnings in the past. They screened for stocks which have disappointed on both earnings and revenue during two or more quarters since the first quarter of 2017 and have declined less than 10 percent from their year highs.

NAFTA’s Winners and Losers
Powell Says Fed Will Continue Hiking Rates Until There Is ‘Compelling Evidence’ That Inflation Is Slowing
Prenups are rare. Here’s why that’s bad for wealth management
Summer Preview: Rolling Blackouts, Higher Gas Prices, Natural Gas Rationing In Europe And A Historic Diesel Crisis
Are They Calling For An Insurrection?