The next wave of earnings reports is so busy and pivotal that it could very well drive investors “crazy,” says CNBC’s Jim Cramer.

But the longtime investing guru isn’t just worried about the many earnings reports coming down the pike.

“I can’t recall a time when the forecast will be more important, certainly much more important than the results,” Cramer, host of “Mad Money,” told viewers.

“If it weren’t enough to worry about the wall, the shutdown, the Chinese trade war and [Federal Reserve Chair] Jay Powell, … next week’s earnings slate is going to drive you crazy,” he said.

Here’s his game plan for the short week ahead: 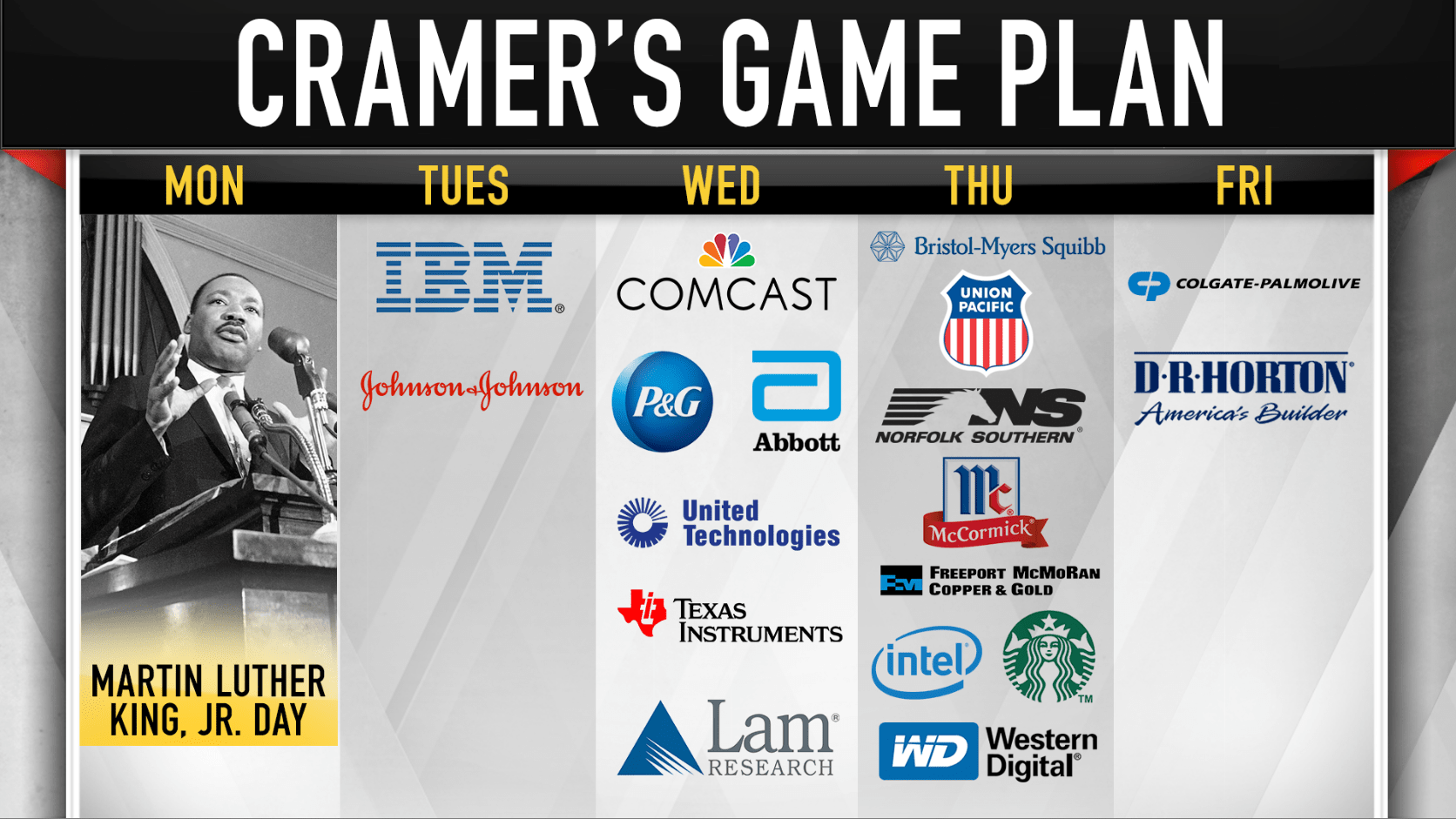 Johnson & Johnson: While Johnson & Johnson’s business may be doing well, its stock still hasn’t fully recovered from reports that the company knew for years it had talc containing asbestos in its baby powder product. That could weigh on the upcoming earnings report, Cramer said.

“I am confident that, even if all of the allegations are true — which I don’t think they are — this issue shouldn’t have destroyed tens of billions of dollars in market capitalization,” he argued. “Will [CEO Alex] Gorsky address it? I don’t know. Please remember, though, when the numbers hit, that currency will be a huge negative.”

IBM: This technology giant will also kick off next week’s wave of earnings, and Cramer will be looking for developments on its deal to buy cloud-based software company Red Hat.

“IBM’s a battleground because people want to know whether this 5-percent-yielder paid too much for Cramer-fave Red Hat,” the “Mad Money” host said. “I think it was a bold and brilliant acquisition.”

Comcast: The NBC and CNBC parent will report earnings Wednesday as it waits for its deal to buy a majority stake in European television network Sky to close.

“I think the deal’s terrific because Comcast has grown so large that the regulators frown on them making more acquisitions here in the U.S.,” Cramer said. “The stock has flatlined, though. Maybe this conference call can get it off the schneid.”

“Once again, there’s currency risk, but management has a laser-like focus on growing this company again and I think they’ll be successful this quarter,” he predicted. “Remember that last quarter was the beginning of Procter’s outperformance. I bet it continues.”

As for Lam Research, “I think the quarter will be weak, and there’s a new CEO,” he said. “But with the stock down almost 100 points, I also think you can start buying Lam Research, betting that we’re near a bottom. […] While it won’t happen all at once, you need to be ready to pick some up if the stock gets hit.”

Bristol-Myers Squibb: This biotechnology company’s CEO, Giovanni Caforio, made Cramer “a believer” in Bristol-Myers’ acquisition of Celgene when he spoke at J.P. Morgan’s recent Healthcare Conference.

“When Bristol Myers reports on Thursday, I expect he’ll talk about how additive this deal is for the company’s earnings,” the “Mad Money” host said. “I think that, after Thursday, people are finally going to embrace this deal.”

Union Pacific and Norfolk Southern: Cramer expects both of these railroad operators’ Thursday earnings reports to be strong after competitor CSX’s solid results.

“Union Pacific has a new chief operating officer who’s a disciple of the late Hunter Harrison, the man who turned around CSX, so I’d be a buyer into any dip,” Cramer advised. “Almost every single CSX line item was good, and both Union Pacific and Norfolk Southern, I think, are stronger than CSX when it comes to freight.”

McCormick: This spice maker will likely tell a good story in its earnings report, Cramer said, adding that he anticipates to hear “great things” about its Frank’s Red Hot division.

“I wonder whether they’ll announce the new CEO. We spoke to interim CEO Bob Swan last week … and he was ebullient about his business,” he said. “Intel is one cheap stock. I’d buy it both before and after [the quarter]. I think the stock goes through $50 on any good news.”

Starbucks: Cramer thinks CEO Kevin Johnson might’ve “stolen some of his own thunder” when he spoke about Starbucks’ strength in recent weeks.

“Remember, this stock took off the last time [he] spoke,” he said. “Unless he’s got some positive news up his sleeve about China, there may be nothing new to propel Starbucks higher.”

But if the stock falls to the $50s, “you might want to snap some up ahead of the quarter,” Cramer added.

Colgate: Cramer’s been hearing a lot of noise about how this consumer goods stock might be ready to rally after years of muted performance, but he’s not convinved.

“I don’t know; it’s not cheap at 20 times earnings, but if Procter can start doing well — and it has — then Colgate might be worth a look, too,” he said.

“The housing numbers have gotten grim in this country and the industry itself has been damaged by rising rates. But mortgage rates seem to have leveled off [and] we got a surge in applications this week,” he said. “That should bode well for Horton. Let’s see what they have to say. Still, I prefer Lennar, and I like KB Home.”

Keep this in mind: while last quarter’s results are important, forecasts will be even more key for investors as the new year kicks off, Cramer said.

“So stay close” and “deeply focused,” he told investors. “We’ve got some good ones that could pop, including Abbott Labs and McCormick and maybe Intel, especially if they get hit before they report.”