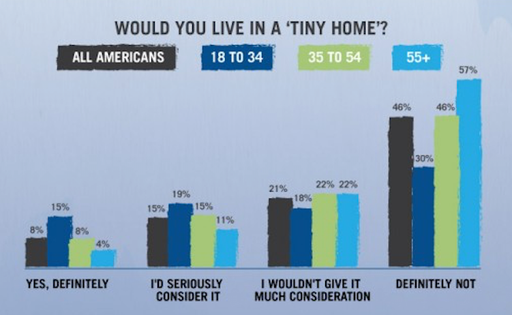 In so many major markets across the country, leaders have their heads down, penciling solutions to the lack of affordable housing.

They are changing zoning regulations and removing other hurdles that are making it difficult for developers to feasibly provide adequate, affordable housing for growing demand.

Not only are regulators getting creative, so are designers. New home product is popping up, like accessory dwelling units (ADUs) that because of new legislation can now be plugged into backyards, and tiny homes.

But, wait – How do these actually make sense in our consumer driven culture? We want what we want and the inconvenience of small living just doesn’t fit into the world of Amazon Prime and Starbucks on every corner.

This cultural resistance to new, smaller product has been proven in numbers. In June 2018, home buying research site Trulia published survey results of 2,000 adults that showed that 44% of homeowners have some regrets about their current residence. The survey showed the top regret (at 42%) as not choosing the correct home size, including one-third of homeowners who wished they’d bought a larger home. Even 16% of wealthier households with upwards of $100,000 in incomes still regretted not getting more space.

Buying a home is a big deal to most Americans, usually the biggest purchase they ever make, so it makes sense that there are some mixed emotions. But are these emotions a product of our own making?

Has housing for decades been engineering homes to drive our desire for bigger? The human psyche, the part of being American that is so American, is the independence to ask for anything and everything, regardless of the cost. We have created this socioeconomic model that now we’re trying to untangle.

And, now, advertising in all its new forms and formats is fueling that further, using psychological techniques that we are completely unaware of, and making us yearn for more and more.

So, in this complicated web of squeezes, where will housing eeck out? How can housing create product that not only fits into cultural comfort zones but also aligns with regulation? In some cases, maybe it will take the insights of more in-touch global brands. Leading consumer brands like Facebook and Google have joined groups like CASA, the Committee to House the Bay Area organized by the Metropolitan Transportation Commission, that is looking at new policies and designs to improve affordable housing locally.

Will groups like that think about changing consumer behavior and changing perceptions to redefine the American dream so that living smaller seems better and future product can be smaller? Or will they focus on codes and policies that give us a healthier supply of housing that in a matter of years turns into another issue?

Leslie Zane, founder and president at Triggers Growth Strategy posted to Quora, an online question and answer center, that consumer behavior needs to be changed subconsciously – where instinctive, automatic decisions are made. She suggests that brands need to build a positive impression that reaches them on a subconscious level.

In the case of new housing options, how do we re-spin the story of the beautiful McMansion in the suburbs to a more dense, smaller home to have allure to today’s buyer?

Quora’s article goes on to say it’s about a positive emotional connection. Can the housing industry start fostering a positive emotion around less space? Can Americans wrap their head around fewer possessions, less storage?

Many states are in the midst of changing building codes and adopting to a tiny home future. California has legislative tiny home enthusiasts and buyers in line. Colorado, Florida, Massachusetts, Michigan, New York, Oregon and, surprisingly, Texas, also are becoming supporters.

Smaller floorplans are gaining popular in certain parts of the country, like this 600-square-foot floorplan from Hanley Wood.Hanley Wood

However, as they are supporting the tiny home movement, the question remains, will there be a market for it? In an infographic by CustomMade, only 8% would definitely choose to live in a tiny home, while 46% of all those surveyed said they definitely would not. However, data from Hanley Wood shows that plans with less than 1,000 square feet saw a 16% increase from 2017 to 2018, where most of the sales occurred in California, Texas and Washington, showing this 600-square-foot plan as the most popular.

We are programmed to want more. Psychologists would argue for a variety of reasons, some of them being evolutionary, to being ego-driven, or simply because we can think and we can imagine possibilities.

Another article in The Oregonian, where tiny homes are gaining popularity, lists 77 reasons why they are a bad idea, moving from the space economics to the return on investment, even saying they don’t cost less.

So, while they are changing policy, can legislators also change the human psyche?