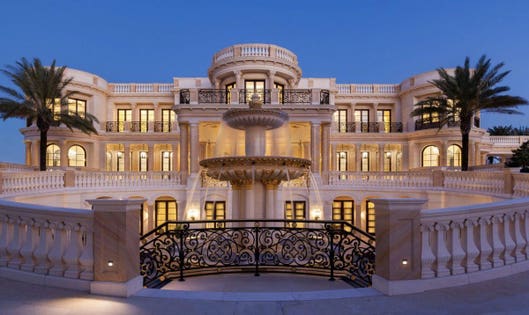 Playa Vista Isle set price records for a house selling at auction in the U.S.Concierge Auctions

One of America’s most talked about homes has finally closed the latest chapter of its selling history. Playa Vista Isle, previously known as Le Palais Royal , was a two-parcel listing asking as high as $159 million. After no buyers came forward, it eventually went to auction via Concierge Auctions, in conjunction with Ralph Arias of ONE Sotheby’s International Realty, on November 12th, 2018. The combined final selling price for both parcels was $42.5 million, as indicated by property records that were updated on December 28th, the second-to-last business day of 2018. The main parcel, with the 11-bedroom, 22-bathroom home with over 30,000 square feet of living area sold for just over $37 million ($37,081,250) and the adjacent 2 acre empty lot of land sold for almost $5.5 million ($5,418,750).

The new owner is an LLC affiliated with former Teavana creators and owners, Andrew and Nancy Mack. They sold Teavana to Starbucks for a reported $620 million in 2012. The seller, Robert Pereira, founder of the Massachusetts-based construction company Middlesex Corp., likely lost money on the deal, telling the Wall Street Journal in 2015 that the construction costs exceeded $100 million.

Reps for the auction house previously stated that the auction had 11 bidders, with over 29 people touring the house and over 1,800 inquires. Even though the sale didn’t garner the nine-figure asking price (which would have made it one of the most expensive sales ever for the U.S.), the sale did set two different records. It is the most expensive home ever sold at auction in the U.S. (the previous record was the $38.9 million sale of Walnut Place in Texas) and it was the most expensive sale in Florida’s Broward County (previous record was $27.5 million for 5 Harborage in Fort Lauderdale).

If you missed it the first time around, here’s a tour of the impressive build. The marble staircase was said to have cost $2 million.

The 4,500-square-foot infinity-edge heated pool is designed to visually blend in with the ocean views.

22-karat gold leaf figures prominently throughout the home, including this living room with ornate ceiling.

The mahogany-hued kitchen with gold trim is adjacent to the living room with fish tank surround the television screen.

The bedroom comes with a private terrace.

As one of just a few homes on Hillsboro Mile, this property has the ocean on one side and the Intracoastal Waterway on the other. The seller spent about seven years conceiving and designing the home but decided to sell because he wanted to travel more, according to several news reports. For Broward County, the next most expensive listing after Playa Vista Isle is a new construction offering asking $32 million within the Las Olas Isles, so it also has views of the Atlantic and Intracoastal Waterway. According to the public listings, there are only nine other homes on the market in Broward County asking over $20 million so this is rarefied territory for the price range.