Even with the U.S.-China trade war still raging, Chinese stocks are on fire.

Increasing trade tensions between the U.S. and China through the back-half of 2018 took a sledgehammer to Chinese shares. Baidu ended the year with a 32 percent loss, while Tencent was down 23 percent, and Alibaba dropped 21 percent.

However, the FXI China large-cap ETF has surged 7 percent in the past three months, while U.S.-listed China-based stocks such as Baidu, Alibaba, Tencent and Sina have rallied by at least 8 percent to begin 2019. And it’s Tencent that’s flashing a buy signal, says Craig Johnson, chief market technician at Piper Jaffray.

“There’s certainly some opportunities to trade here,” Johnson said on CNBC’s “Trading Nation” on Friday. “If I look at the chart of Tencent, here’s a stock that’s traded off meaningfully. We’ve now just reversed the downtrend.” 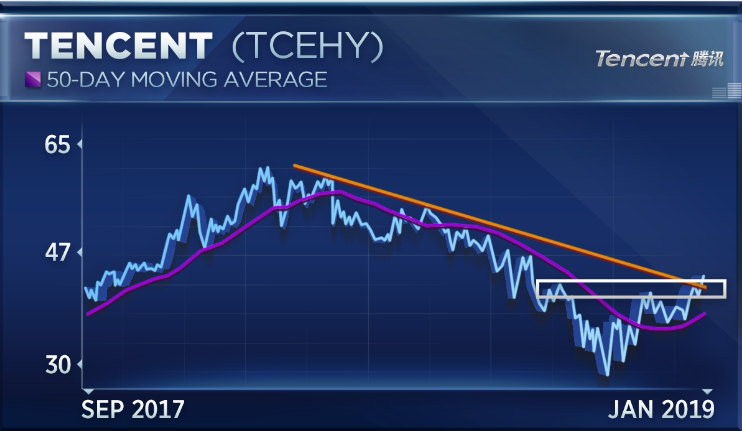 Tencent had plummeted 47 percent from its January peak last year to its trough last October. Since that bottom, it has rallied 35 percent to four-month highs.

“When we’ve seen a MACD buy signal happen like we have right here, we’ve seen that 30 days later that the stock is typically up almost 13 percent,” Johnson explained. “This would be one we’d be buying.”

The rally in the rest of the Chinese stocks should also continue as investors pick up bargains, says Gina Sanchez, CEO of Chantico Global.

“The reality is that the Chinese stocks have been extremely cheap, and even with this rally they’re still actually fairly cheap,” Sanchez said on “Trading Nation” on Friday.

The FXI ETF trades at below 8 times forward earnings. By comparison, the S&P 500 has a 15 times multiple.

“You look at a lot of these big names – Baidu, Tencent, Alibaba – they still can make tremendous amounts of growth just within the Chinese economy,” Sanchez added. It means the “trade outlook has an impact, but some of these stocks they have been beaten down for no good reason across emerging markets.”

Biden: “We Need More Money To Plan For The Second Pandemic. There’s Going To Be Another Pandemic.”
The Rise of Holistic Marketing: Everything Matters
SEC charges Texas official with falsifying financial statements, misleading investors
The Fed’s Rate Increases: Too Little Too Late?
Survivors of 2022 crypto crash could be the new Amazons and eBays – BOE