Gold prices are hitting eight-month highs, thanks to investors looking for an alternative to stock market volatility.

Prices are also being supported by a weaker dollar and buying by global central bankers and Asian jewelry buyers.

Gold futures closed above the key $1,300 per troy ounce this week, and the February contract closed at a high of $1,308.90 Tuesday. Gold had fallen into a slump last summer and had been held back by a soft demand picture

The changing demand dynamic, and a flight to safety by skittish investors, has changed the prospects for gold and it could perform much better in 2019.

“This could be gold’s year,” said Suki Cooper, precious metals at Standard Chartered Bank. Since mid-November, when gold was at $1,200, it has gained about 9 percent.

Some analysts expect the precious metal to take a rest and pull back in the near term, but then continue to edge higher later in the year and head toward $1,400 per ounce towards the end of the year.

“We expect a pullback in the coming months,” said Cooper. “We think the price is more likely to make a sustained move higher in [the second half of the year]. We do see prices at $1,300 but we might see a correction.” Cooper said she expects gold to average $1,305 per ounce in 2019, but by the fourth quarter, gold should be holding firmly above $1,300. 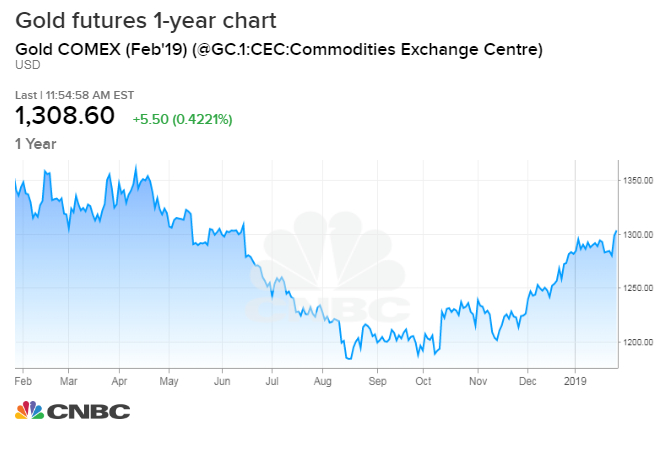 The dollar’s recent weakness has also been a positive for the metal.

Steel said 23 different central banks were buyers of gold last year, and that helped support prices. Most prominent were Russia and Kzakhstan.

“They often move together because they all have these same economic rationale. If one central bank has recognized that gold is a good asset to have or to hold in its FX reserves, then it’s likely other central banks will arrive at the same conclusion and adopt a similar strategy,” he said. “Most of the countries buying have low gold reserves. those that do have a lot of gold like western Europe or the U.S., they’re not buying….We think the central bank purchases will continue on a good vein.”

The Brexit uncertainty has also helped gold, and so has the idea of trade wars.

“Geopolitical risks can be supportive of gold but they have a short life span,” said Steel. “If we were to think we’re going to have trade wars, that would be a secondary support to gold.”

“There tends to be an inverse relationship between trade flows and gold. In periods when world trade is growing quickly, gold prices tend to be low. The rationale behind that is high trade volumes usually mean low inflation, strong paper assets, strong dollar, strong equity markets,” he said.

Cooper said there has also been strong buying by gold ETFs, like the most popular SPDR Gold shares ETF GLD.

“Total ETF holding is now at its highest in six years” said Cooper. “The big structural shift was back in 2013, almost 70 percent of the holdings were concentrated in the U.S. and now we’ve seen hefty redemptions across the U.S. and continued buying in Europe, so now there’s a much more even split more like half and half.” Cooper said European buyers are more likely to be more conservative and they would hold on longer.

Asian jewelry buyers have become more active, and Cooper said Chinese consumers began buying back in December, ahead of China’s Lunar New Year, which is early next month..

“The consumer market has been somewhat lackluster and that’s normally where we look to provide support for the gold market,” said Cooper.