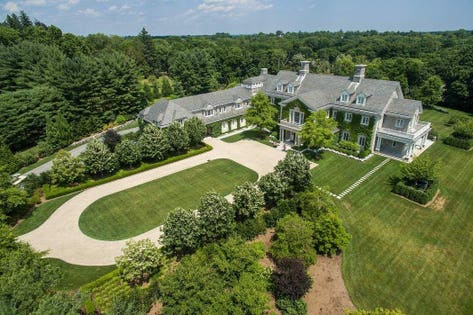 The most expensive sale of 2018 for Greenwich, CT was this Georgian mansionSotheby’s International Realty

A home that had originally come on the market for $35 million over two years ago sold at the tail end of 2018 for $17.5 million, making it the highest priced sale of 2018 in Greenwich, Connecticut, a commuter suburb about an hour from Manhattan. The 6-bedroom, 13-bathroom house sits on 5.34 acres and contains 16,863 square feet of living space.

The sellers were Ara D. Cohen, co-founder of Knighthead Capital Management, and his wife Hilary Bangash Cohen, represented by Leslie McElwreath and Joseph Barbieri of Sotheby’s International Realty. The new owner is an LLC linked to an undisclosed buyer, repped by Robin Kencel of Compass. Kencel declined to comment on the sale or the identity of the buyer.

Most recently the home had dropped in price to $24.995 million, after an initial decrease down to $29.5 million from its original asking price of $35 million. This can still be considered a success story for Greenwich since luxury homes sales in Fairfield County, where Greenwich is located, are showing signs of a slow down. According to data from the appraisal firm MillerSamuel, average prices for luxury homes (defined as properties priced $1.3 million or higher) dropped to $2.397 million in the third quarter of 2018, down from $2.5 million compared to the year prior. Greenwich has 37.3% market share of luxury sales within the county, ranking it the highest in Fairfield for activity at the high end of the market.

There are only five Greenwich homes on the market with higher asking prices, ranging from an $18.75 million, 8,111 square foot home overlooking Long Island Sound to a $45 million refurbished estate originally built in 1939 also overlooking the Sound.

This sale also comes with a two-bedroom pool house and both an indoor and outdoor pool. The indoor pool is in the style of a Roman bath, lined with columns and with an atrium overhead. There is also a billiard room with bay windows, wine cellar, a dramatic two-story entry with domed ceiling and, just for fun, an outdoor chessboard.

Breaking away without breaking spirit with Alan Foxman
Rewards4Earth plans to roll out crypto rewards to 1000 sports clubs in Australia
We Are Witnessing A Stunning Breakdown Of Law And Order, And The Overwhelmed Police Seem Powerless To Stop It
End Of The Dollar! Fed Announces Reset Plan! Digital World Currency Imminent!
Economics class video: Farming — the difficult first step towards net zero